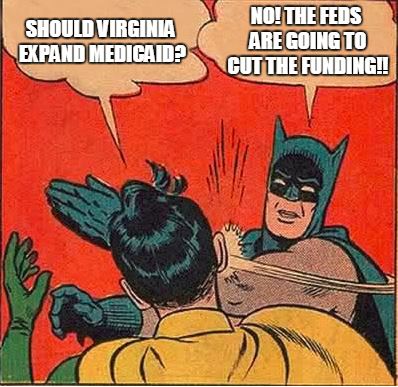 On Wednesday, the Office of Management and Budget released a statement via its official Twitter account on the subject of Medicaid expansion at the state level…and it was not good news for expansion fans:

Director @MickMulvaneyOMBâ€™s statement on the Obamacare Medicaid Expansion in Virginia.

This is not some vague statement.Â  This is about as clear as budget-speak gets.

Medicaid expansion is too expensive.

Medicaid expansion is not producing the improved health care for your target audience.

Medicaid expansion is crowding out the truly needy in favor of people who are able to work and take care of themselves.

In short, it is a waste of money, and the Feds are about to shut off the financial spigot.

As I pointed out here, one of the many flaws of Medicaid expansion has been the idea that we would rely on the Federal government to cover over 90% of the costs for the nearly 400,000 people we would be adding to Virginia’s welfare rolls. The concern has been that someday the Feds would cut off the money, and Virginia would be obligated to cover 100% of the costs. Well, the Trump administration is telling us right up front that someday is now and they are looking to end the program and shut down the money.

The timing of this statement is not a coincidence. It is a warning, and it is one Republicans in the Virginia General Assembly need to listen to very carefully.

Do they want to walk up to Capitol Hill, hat in hand, asking pretty please for lots and lots of money to pay for a massive expansion of Government after the Feds have just told them not to expect the money to be there?

Do they want to obligate Virginia to provide health coverage for another 400,000 people after having been told point blank not to do it by the very people they would be counting on to pay for it?

Do they want to alienate their base during an already tough election cycle, and throw all semblance of fiscal responsibility out the window, knowing ahead of time that it is about to blow up in their face?

Speaker Kirk Cox and Senate Majority Leader Tommy Norment both need to take this statement for what it is, and pull their respective chambers away from the brink before it’s too late.

Imagine your reaction had Obama said this!! Crickets now…

â€œSweden’s Electrolux said it would delay a planned $250 million investment in Tennessee, after Trump announced tariffs on imported aluminum and steel.â€

Thanks to the Trump GOP. So CONservative…

THANK YOU! I’m sure some delegates have been bought or promised various things for their shocking betrayal of the people they represent.

â€œWhen a country (USA) is losing many billions of dollars on trade with virtually every country it does business with, trade wars are good, and easy to win. Example, when we are down $100 billion with a certain country and they get cute, donâ€™t trade anymore-we win big. Itâ€™s easy!â€œ

Trumps tweet. And you think we should listen to this idiot on anything? He hasnâ€™t got a clue.

Meanwhile, Trump also hits us all with a massive tax increase in the form of tariffs on steel and aluminum. This administration is careening our of control. Nice job, Republicans!

So a number of Virginia Republics want https://uploads.disquscdn.com/images/78f0f7d02880308314a4d352dd61456d086c4f44b1fb8e07b0740bea42110a8d.jpg to alienate their base during an already tough election cycle, and throw all semblance of fiscal responsibility out the window, knowing ahead of time that it is about to blow up in their face?

VA Republicans are tired of winning, they didnâ€™t compete in 27 HOD races, barely prevailed in the ones they did run and sucked sufficiently in the others to lose a few good men.

The Senate and Tommy Normant have been holding the line this entire time. Focus your efforts on the House where it belongs.

Have you seen who Tommy Norment appointed as Senate conferees??

Are these the ones that will hold the line against Medicaid expansion in conference with the House?

They are the best money can buy.

Terrible! Of course they will all support Medicaid expansion.