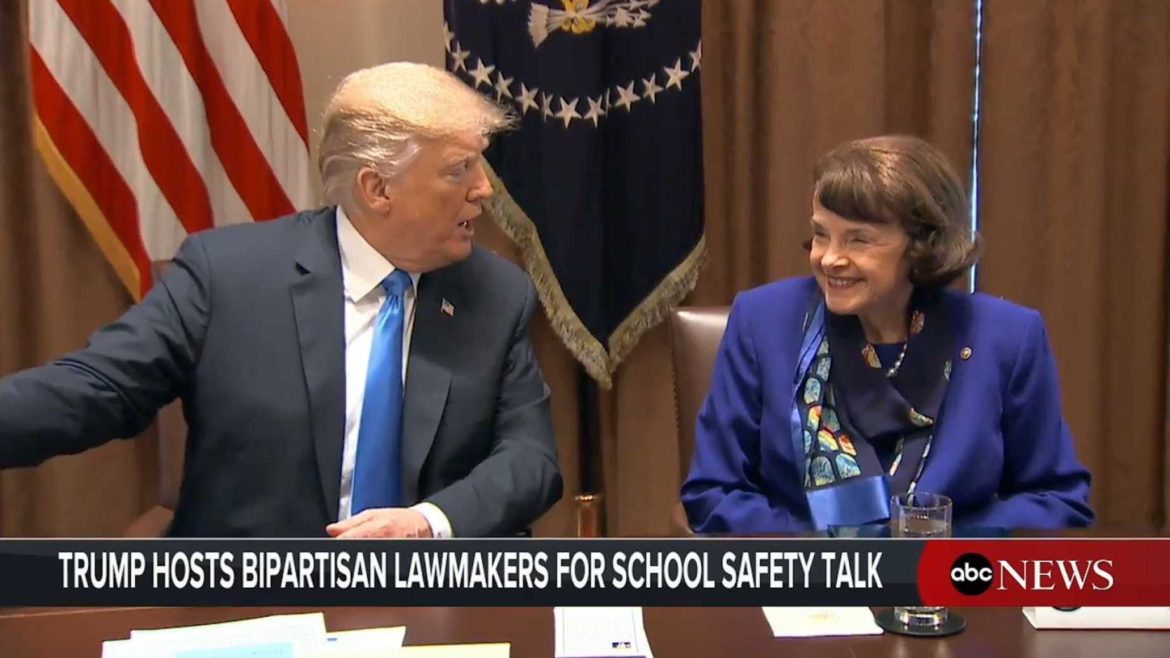 President Trump has had quite a week when it comes to the subject of guns in America. After having a private meeting with NRA officials over the weekend the President met with the National Governor’s Association and slammed a knife right between NRA President Wayne LaPierre’s shoulders in making the claim that the only reason we don’t have gun control legislation that would work, in his mind, is because the NRA is blocking it:

“You guys — half of you are so afraid of the NRA,” Trump said in his remarks to the Governors in attendance.  “There’s nothing to be afraid of.  And you know what?  If they’re not with you, we have to fight them every once and a while.”

The remarks help buttress claims made by Democrats that Republican lawmakers are bought and paid for by the gun lobby, making it that much harder for Republicans to stand up for your second amendment rights. Trump was not finished as he made the claim that he was going to outlaw bump-stocks (devices that allow a semi-automatic weapon to fire at the same rate as an automatic weapon) via executive order. Whether you believe bump-stocks should be legal or not, the President does not have the authority to ban the ownership of any product.  That is a purview of Congress.

The next day, President Trump met with Republican and Democrat members of Congress to discuss new gun legislation. Once again, Trump ripped the NRA and criticized Republican members of being “afraid of them.” He renewed his call to ban bump-stocks, supported raising the minimum age from 18 to 21 to purchase a rifle, and asked Senator Diane Feinstein to make sure her priority of banning assault weapons was included in any legislation that comes forward.

If this were the limit of Trump’s gun control measures it would be bad enough, but he went even farther, arguing that Americans deemed by others as a “threat” should be stripped of their due process rights and have their second amendment rights taken away without a trial:

“You have to do something very decisive. Number one, you can take the guns away immediately from people that you can adjudge easily are mentally ill, like this guy. You know, the police saw that he was a problem, they didn’t take any guns away. Now, that could have been policing. I think they should have taken them away anyway, whether they had the right or not. But I’ll tell you this, you have to have very strong provisions for the mentally ill.”

Vice President Pence pointed out to the President that there were discussions taking place to draft legislation that would allow family members or loved ones to petition the court to temporarily remove someone’s guns after a competency hearing.  That, Pence said, would preserve an individual’s right to due process, but Trump was having none of it:

“Or, Mike, take the firearms first, and then go to court. Because that’s another system, because a lot of times, by the time you go to court, it takes so long to go to court to get the due process procedures, I like taking the guns early, like in this crazy man’s case that just took place in Florida. … To go to court would have taken a long time. So you could do exactly what you’re saying, but take the guns first, go through due process second.”

Republican Majority Whip, Steve Scalise, who was critically injured when a deranged gunman attempted to assassinate Republican Congressmen, suggested that maybe some of these new gun control regulations could be paired with much needed legislation such as concealed carry reciprocity.  The current mishmash of state laws make any type of travel with a firearm extremely problematic. A law-abiding gun owner with a concealed carry permit may be perfectly legal driving down the highway with a handgun in his car, but as soon as they cross state lines into a state like New Jersey, they instantly become a criminal, and American citizens from other states can, and have, been jailed in NJ for this very issue.

Trump, however, rejected that idea, saying he wanted a “clean bill,” and any discussion of concealed carry reciprocity should be dealt with later.

I don’t know how you can look at this situation and conclude anything other than President Trump wants to gut the second amendment.  I have recently made the point that gun control laws don’t work, and if you want to deal with school shootings, you need to change the culture.  Wasting time demanding more and more gun control laws is simply a way to advance the agenda of ending the right of individuals to defend themselves.

Due process is not an option.  It is a right guaranteed in the Constitution, as is the right to keep and bear arms.  For the President of the United States to suggest we simply ignore due process and judge American citizens guilty until proven innocent is a shocking, and quite frankly, frightening prospect.  Allowing your second amendment rights to be taken away by the subjective decision of a judge makes those rights essentially nonexistent.  It is nice to think that this would only affect people who are obviously mentally ill, but that is not where it would stop.

After all, this is the same government where the FBI under Obama declared Conservative grass roots organizations were more dangerous to public safety than terrorists.

This is the same government where states like California are trying to pass laws to require parents who home school their children to submit to annual inspections by Child Protective Services.

This is the same government that wants to deny you the right to own a gun if a bureaucrat has placed you on a “watch” list without any evidence of you having either committed a crime, or shown any intention to commit a crime.

I have heard die hard Trump supporters blowing this off as just “Trump being Trump.” “Don’t listen to what he says,” they say, “but watch what he does.” Hogwash.  If this were a Democrat, or any other Republican but Trump, these same people would be up in arms. Not only that, but words do mean things, especially coming from the President of the United States. Faced with a Republican President bashing the NRA and calling for weapons bans, numerous companies have cut ties with the NRA.  Dick’s Sporting Goods and Walmart have both been emboldened to announce they will refuse to carry “assault style” rifles, and refuse to sell any weapons to anyone under 21.

The truth is that we have seen this before with the illegal immigration debate, and the only things that stopped Trump from getting his “clean” amnesty bill were the defiance of his own advisers and the refusal of Democrats to deal with Trump, gambling on the idea that keeping the issue alive will help them in the November elections so they can take control of Congress.  I expect the same calculation will take place with these new gun control proposals.

Emotions are running high right now, and Democrats and the media are attempting to use those emotions to pressure quick action on new gun control laws. If Republicans, and Trump supporters, are not willing to stand up to the President and say, “no” to these efforts, we may erode the second amendment even farther, placing our lives in even greater jeopardy from criminals and makings us ever more dependent on the government for our safety.