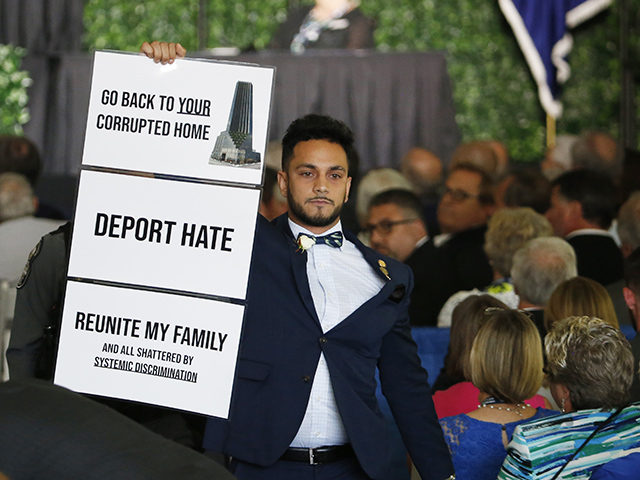 President Trump conducted himself with the dignity one normally expects from a president earlier today at the commemoration of the 400th anniversary of the first legislative assembly in the New World and the arrival of the first African slaves. For a day at least, he set aside sharp words and divisive tweets. Following his controversial criticism over the weekend of Rep. Elijah Cummings, D-Maryland, and what he described as the rodent-infested condition of Cummingsâ€™ Baltimore district, Trump took the opportunity to praise the first people in North America to form a representative government, to condemn slavery, and to honor African-Americansâ€™ contributions to U.S. history.

Wherever Trump goes, controversy is sure to follow, even when he is not instigating it. Not only did the General Assemblyâ€™s black caucus refuse to attend ceremonies in which he appeared, Del. Ibraheem S. Samirah, D-Herndon, caused a brief disruption during the presidentâ€™s speech when he raised a sign, saying, â€œGo back to your corrupted home. Deport hate. Reunite my family and all those shattered by systemic discrimination.â€

â€œThe man is unfit for office and unfit to partake in a celebration of democracy, representation and our nationâ€™s history of immigrants,â€ Samirah said in a Twitter post.

The Republican Party of Virginia cited previous Samirah tweets to characterize him as an anti-Semite. Several years ago the second-generation Palestinian tweeted that the KKK was â€œbetter than Israelâ€ and wondered â€œwhy he should care about the Holocaust.

Trump Came, He Saw, He Did Not Tweet was last modified: July 31st, 2019 by Guest Contributor James Bacon