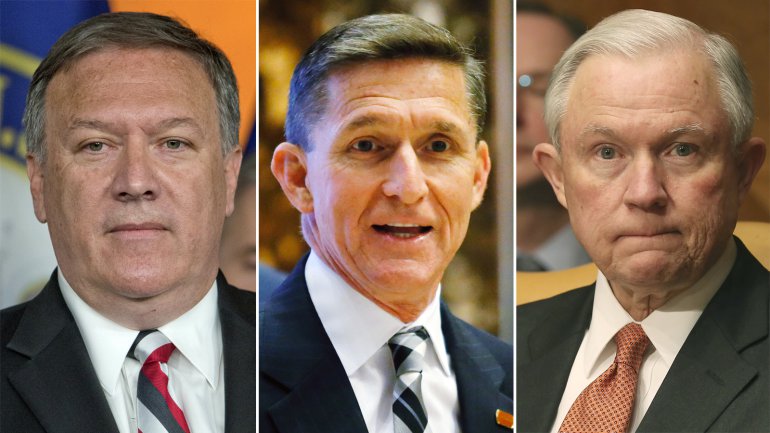 President-elect Trump has chosen Senator Jeff Sessions (R-Alabama) to be US Attorney General. Sessions has served as a federal judge and Attorney General in Alabama. He’s a conservative who takes a hard line on illegal immigration. He was an early supporter of Trump for President.

To lead the Central Intelligence Agency Trump has chosen Congressman Mike Pompeo (R-Kansas). He has served for three terms on the House Intelligence Committee. Pompeo is a critic of Hillary Clinton and supported investigations into what happened in Benghazi, Libya. Pompeo graduated first in his class at West Point and went on to Harvard Law School.

For his National Security advisor Trump has chosen another early supporter, retired General Mike Flynn. In his announcement Trump said,

â€œI am pleased that Lieutenant General Michael Flynn will be by my side as we work to defeat radical Islamic terrorism, navigate geopolitical challenges and keep Americans safe at home and abroad,â€

â€œGeneral Flynn is one of the countryâ€™s foremost experts on military and intelligence matters and he will be an invaluable asset to me and my administration.â€

All three of these men are solid choices for the Trump cabinet. Â More on the three here.Â

Trump hasn’t even been inaugurated and already his junta is beset with scandal.

Trump pays $25 million to settle fraud suit against him.

And let’s don’t even talk about the 2,500 other suits from contractors whom he stiffed.

Trump announced today he’s headed for one of his golf courses in NJ for a working weekend vacation.

Not a single peep out of Fox or the Bullshitting Elephant.

However, if Obama played a round of golf, it was an impeachable offense.
‘
If there were no hypocrites, there would be no republicans.

We have never posted anything about Obama’s trips to the golf course. Why would we? I hear Trump also went out to dinner this week with his family. We didn’t report that either.

You say: We have never posted anything about Obama’s trips to the golf course.”

Oh please. That was entirely different. People in LA were suffering, Trump went to help, and Obama played golf. So yeah, we called him out on that one. BTW, Trump is not President for another two months and he’s not neglecting starving people.

Trump went to help all right . . . when the governor of LA and local officials asked people to stay away because the locals were busy with rescue. I guess you didn’t see the photo of Trump unloading cases of Play-Doh.

Of course, you failed to mention that FEMA was first in and was praised by local and state officials.

And . . . before you continue with this thread, you might want to know that I am from SW MS with relatives all over south Louisiana, including two parish sheriffs, two LA state legislators, a NO federal judge, two LA state judges, and a former member of Congress from LA. In addition, I’m a survivor of Hurricane Katrina and I can testify first-hand to the total incompetence of the Bush administration and the clown who headed FEMA under Bush.

Jeanine, is there anyway I can prevent rednecks comments from showing up on my screen?

Not that I’m aware of. What’s a disqus issue, they might be able to help you.

In case you missed it, we elected a President who doesn’t take office for a couple of months.

It was a long race, the contenders can blow off some steam. Hillary can go on alcohol-fueled binges, Trump can go play golf.

Trump should get the people he wants. I ain’t going to complain about these picks. Sessions, maybe he will get some buses loaded and headed south to Mexico.

Flynn is a train wreck. The other two are solid.

“Lieutenant General Michael Flynn” If Old Redneck is reading, that is THREE stars. If you have to count them, use all your teeth.
This cabinet is looking REALLY good so far.