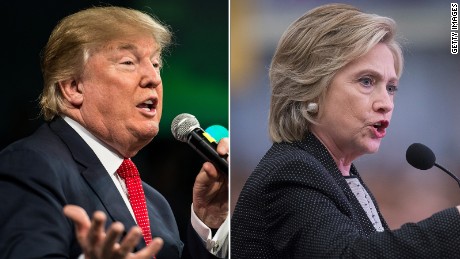 Trump Continues to Rise in the Polls

In the latest Reuters/Ipsos national tracking poll Trump is now up by 1%, with Trump at 40% and Clinton at 39%, erasing an 8% lead by Clinton. Among Republican voters Trump’s support rose by 6% over the last two weeks and is now at 78%. The poll was conducted in all 50 states over the week of August 26th to September 1st.  They surveyed 1804 likely voters.

Investors Business Daily, the IBD/TIPP poll, has the Clinton up by only one point, 44% to 43%, among likely voters.  A week ago Clinton was up by 7 points, 46% to 39% among registered voters. 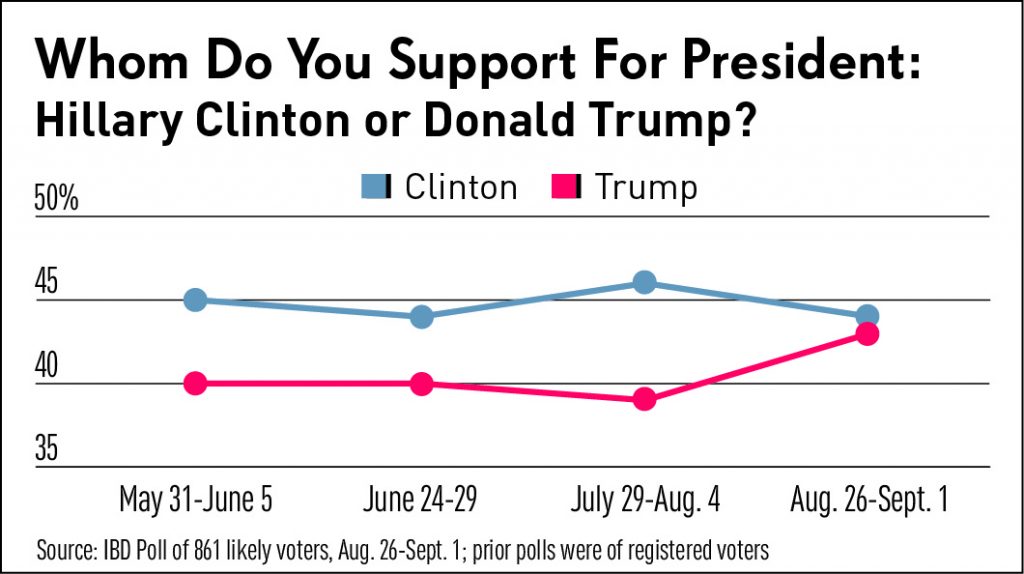 IBD/TIPP has been the most accurate poll over the last three elections. 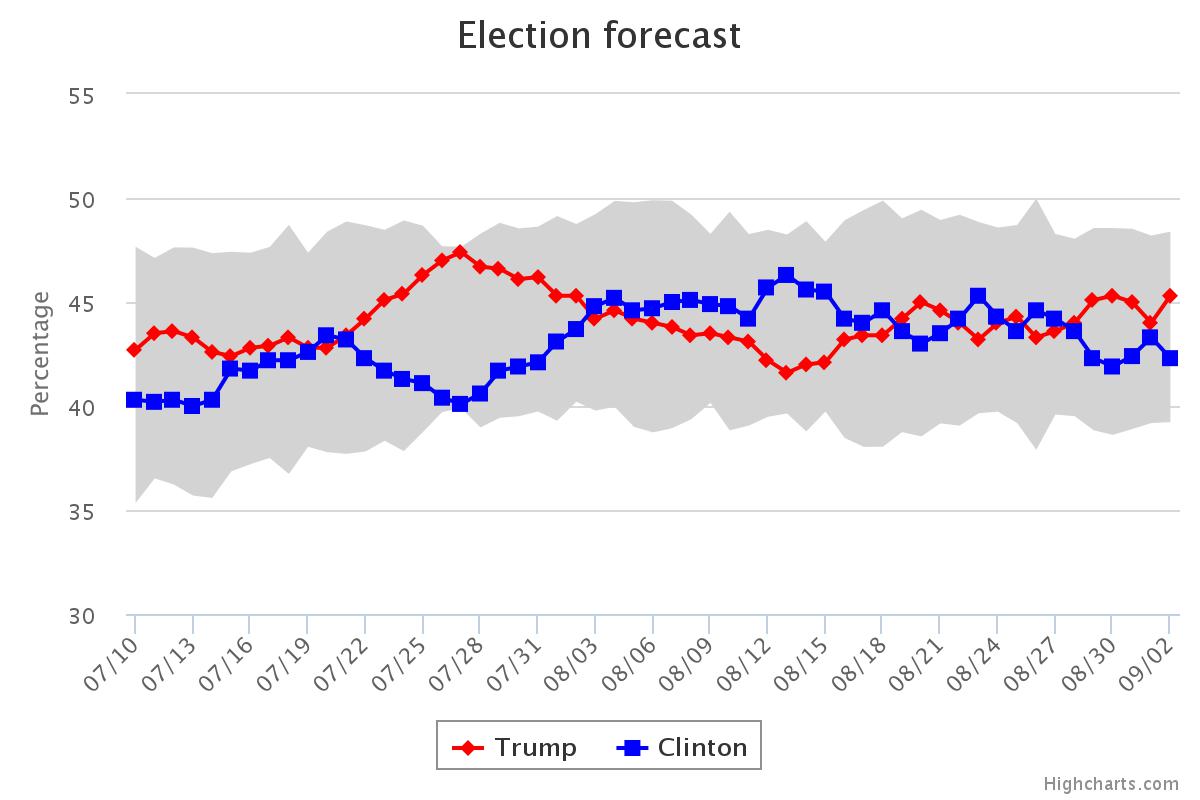 It seems Trump is rising while Clinton continues her decline.  The more the public learns about Hillary Clinton the less likely they are to vote for her.

Trump Continues to Rise in the Polls was last modified: September 3rd, 2016 by Jeanine Martin

To follow up on Jeanine’s post from two days ago showing Clinton up in Virginia by just two points based on a poll from Hampton University, a new poll out today from Emerson College shows Clinton up by only 1 point in Virginia! This race is basically a statistical dead heat now!

Let’s keep talking to friends and family over the next two months to turn Virginia back to red in November.

The Emerson Poll also shows that he has 15 percent of the black vote in Virginia. Romney had 7 percent.

Trump apparently knocked it out of the park with his visit to a black church in Detroit. Got a standing ovation.

As long as losers like Cruz, Kasick, Bush, Romney and Sasse keep their mouths shut Hillary will be defeated.

If Trump loses it will no one’s fault other than himself and his candidacy.

True, but as The Donald is looking more presidential every day, the odds of a loss are shrinking. Those unprincipled republicans will not matter one little bit in the end.

Actually, faux conservatives like you who attempt to undermine his campaign in Virginia would have a lot to do with it.

That was before ‘Trump must Win!’

Rocinante, someone has to explain to me what is going on in Virginia. I’ve lived in Virginia 20 years. I’ve been a loyal Republican – though primarily interested in the Presidential rather than local elections. But my exposure to the GOP in this state during this cycle has been very off-putting to say the least. And I know many, many people who feel the same way.

Trump is a tremendous opportunity for the Party in terms of expansion, but I get the sense that a clique of people in this state are fearful of losing control…that winning is less important than that control.

We’re living through a historical transformation of the GOP and the American political scene overall. I don’t get the sense that that many folks around here truly recognize what is going on – even locally in Virginia. They had better be careful.

“They had better be careful,” or else what?

Making threats is not a great way to of establish the unity necessary for victory.

Steve, from what I can tell, many on this site have no interest in party unity. Words matter because they can influence others. Actions matter too.

The shenanigans at the state and national conventions were a disgrace to the GOP in Virginia. Trust in the GOP is now at an all-time low.

I think many of us have our theories.

We could write several blog posts in answer to that. The establishment folks in the party don’t like much of anyone who they haven’t blessed. Trump is definitely NOT one of them, so they have little use for him.

The grassroots in the party are nothing like that, they are not controlled by the establishment Republicans and they think and act independently.

Read anything posted by Lawrence Wood.

Go to your local GOP Unit County/City monthly meetings, listen, smile, and nod until you learn the players and get the lay of the land.

Join the Trump campaign as a volunteer.

In a nutshell, the RPV has systemically neutered the local units and rank and file grassroots within.

Candidate organizations have supplanted the party and has created a party of personalities and independent warlords/imams/prophets centered around mostly themselves and the occasional special interest.

So the hollow party with their faux conventions and no mass meetings have a few bitter personalities that fight each other for a slice of ever shrinking of political pie.

You know that we’ve had a series of lame candidates punctuated by possibilities, and our last motley crew of unelectable, ineligible candidates resulted in the electorate and Republican politically savvy visionaries (like me) seeing Donald Trump as saving and helping to relevantly redefine the GOP.

The establishment Republicans want to preserve their power and loot they get for pretending to be against but climbing on the gov’t spending gravy train.

The pretend conservative Republicans are living in a fantasy world where they can find and elect a philosophical savior who will magically do only conservative things. (If Trump wins, Cruz the Ineligible will never have a shot, because Pence would be next.)

So get involved, read, listen, and learn, and help The Donald fix the broken GOP.

I’m slightly offended at your post. Prior to Trump becoming the official nominee, at one of our monthly business meetings, you requested and we opened the floor to public comments where you gave an impassioned speech about Trump winning. You finished with something along the lines that there would be Hell to pay if he didn’t. You caught a lot of people in the room off-guard with your comment, since almost anyone involved in the unit/district/state Republican party knows it is candidate choice in the primaries or until the official nomination, Republican in the General.

At the unit level, prior to the nomination, there were significant Cruz supporters in our group but once the nomination was secured by Mr. Trump, our support and our efforts are now focused on his win. We stand by our choices in the primary and our Republican in the General. Are there neverTrumps? Sure, but the number is insignificant and quite frankly, that is their choice. The membership of committees are not idiots, we do recognize what is going on and we are committed for victory in November.

I would recommend that instead of quarterback the intentions and plans of the committee from afar, you might want to become involved in the actual unit and join those Republicans that are doing their best to get people excited, get out the vote and get him elected in November.

Fair enough Danielle. Thank you for the feedback.

But the shenanigans at the State and National conventions were predictable and evidence of a strong treacherous streak in Virginia GOP politics. My impressions also seem to be supported by others who are far more intimately involved in internal local party politics.

I hope the bulk of GOP leadership in Virginia realizes what is truly at stake, not only for the Party, but far more importantly, for the country. The Pledge of Allegiance that is recited before every monthly meeting should actually mean something to those who recite it.

Quite true, the TBE endorsement was the last piece in the puzzle!