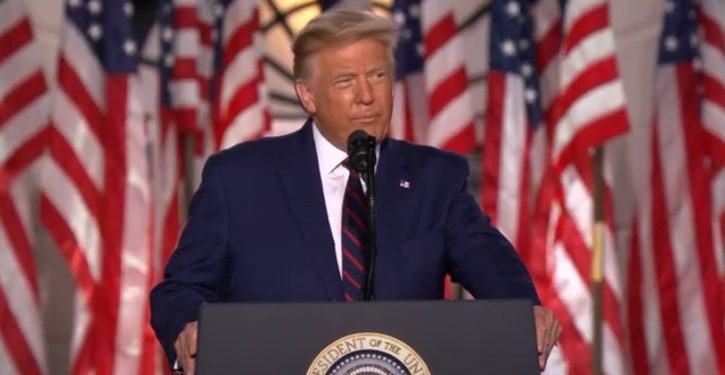 Trump curbs segregated anti-white training that could lead to lawsuits

It makes no sense for an agency to subject its employees to training that could lead to costly lawsuits against it. But certain government agencies and contractors have been sending their employees to segregated training sessions in which white employees are scapegoated based on their race and taught that laudable things like “hard work” and “striving towards success” are badges of “white supremacy.” Such training could lead to lawsuits under the 1964 Civil Rights Act, so it makes sense to ban it.

The Trump administration has now issued an executive memorandum regarding “Training in the Federal Government” that seeks to end such training.

It has come to the President’s attention that Executive Branch agencies have spent millions of taxpayer dollars to date “training” government workers to believe divisive, anti-American propaganda. For example, according to press reports, employees … have been required to attend trainings where they are told that “virtually all White people contribute to racism” or where they are required to say that they “benefit from racism.” According to press reports, in some cases these training have further claimed that there is racism embedded in the belief that America is the land of opportunity or the belief that the most qualified person should receive a job. These types of “trainings” not only run counter to the fundamental beliefs for which our Nation has stood since its inception, but they also engender division and resentment within the Federal workforce. …..

The President has directed me to ensure that Federal agencies cease and desist from using taxpayer dollars to fund these divisive, un-American propaganda training sessions. Accordingly, to that end, the Office of Management and Budget will shortly issue more detailed guidance on implementing the President’s directive. In the meantime, all agencies are directed to begin to identify all contracts or other agency spending related to any training on “critical race theory,” “white privilege,” or any other training or propaganda effort that teaches or suggests either (1) that the United States is an inherently racist or evil country or (2) that any race or ethnicity is inherently racist or evil. In addition, all agencies should begin to identify all available avenues within the law to cancel any such contracts and/or to divert Federal dollars away from these un-American propaganda training sessions.

The executive memorandum came in response to such training at places like Sandia National Laboratories, which designs America’s nuclear weapons. It recently operated a segregated “3-day reeducation camp for ‘white males,’ with the goal of exposing their ‘white privilege’ and deconstructing ‘white male culture.’”

Such training can contribute to a racially hostile work environment in violation of Title VII of the Civil Rights Act. Judges have ruled that employers are liable for racial harassment against whites, in cases like Huckabay v. Moore (1998) and Bowen v. Missouri (2002).

Harassment includes acts by trainers that create a racially or sexually hostile work environment. For example, a judge refused to dismiss a federal employee’s lawsuit for sexual harassment over a diversity-training seminar that subjected males to insulting comments and offensive contact. (See Hartman v. Pena (1995)).

The Sandia training could easily contribute to a racially hostile work environment, given its pervasively hostile and insulting content. Trainers wrote that white culture is associated with “mass killings.” White male employees were forced to “apologize for their ‘privilege,’” and told to expose the “roots of white male culture,” which consists of “rugged individualism,” “a can-do attitude,” “striving towards success,” and “hard work,” which are “devastating” to women and people of color.

Yet, the liberal Washington Post defended the training targeted by the Trump administration, claiming in a “news” story by two progressive reporters that “experts” believe these “trainings are essential steps in helping rectify” America’s “pervasive racial inequities.” One “expert” it quoted was a trainer who gave “hundreds” of race-related trainings. That gave him a vested interest in touting their alleged benefits, and made him anything but an unbiased “expert.”

That trainer claimed that the racial sensitivity trainings targeted by Trump can improve employee “morale” or productivity. But it is hard to understand how being told to “apologize” for your privilege improves morale. And disparaging employees’ “hard work” and “striving toward success” as a manifestation of white supremacy could easily undermine their morale, work ethic, and productivity.

These false claims made by the training, and its blanket depiction of white employees as racist, could easily foster a racially hostile environment. Courts have ruled that “baseless accusations of racism” made against employees because of their race are racial harassment that contributes to a racially hostile work environment in violation of the 1964 Civil Rights Act. (See Underwood v. Northport Health Services (1989)).

These trainings can also lead to other civil-rights violations. They commonly segregate employees by race, giving different training to whites and minorities. For example, Sandia sent only white males to its three-day reeducation camp. Similarly, in July, the City of Seattle required white employees to attend racially-segregated training on “Internalized Racial Superiority for White People.”

The segregated nature of this training may run afoul of a provision of Title VII of the Civil Rights Act. Accordingly, last week, U.S. Civil Rights Commissioner Peter Kirsanow wrote a letter to Seattle’s mayor. Kirsanow, an African-American, questioned the legality of the city’s “training” program under federal civil rights law:

It shall be an unlawful employment practice for an employer … to limit, segregate, or classify his employees or applicants for employment in any way which would deprive or tend to deprive any individual of employment opportunities or otherwise adversely affect his status as an employee, because of such individual’s race, color, religion, sex, or national origin.

Seattle’s segregated training denounced characteristics like “perfectionism” and “objectivity” as racist and depicted them as the product of “the white dominant society.” That’s very offensive, not just to white people who exhibit such traits, but also to black people. A reasonable black employee could be very offended by the idea that her objectivity and striving for success are just signs of “acting white” and being an Uncle Tom. Yet, that’s what Seattle’s training implied. As Kirsanow notes in his letter to the mayor:

One of the first training documents defines “Four Types of Racism.”…. One of the four types of racism is “internalized racism,” defined as “The internalization of the racist stereotypes, values, images and ideologies perpetuated by the white dominant society about one’s racial group.” And what qualities constitute “internalized racism”? Well, according to the next slide, here are characteristics of “Internalized Racial Superiority”: