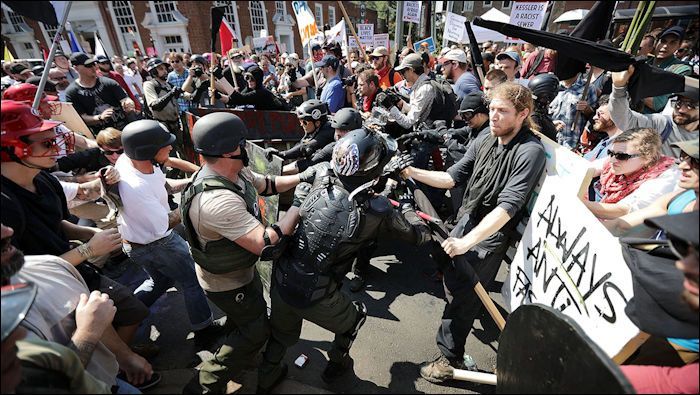 Trump, His Haters, and the Truth about Charlottesville

Citing scheduling conflicts, Tony Bennett, coach of the University of Virginia men’s basketball team, announced Friday that the team would decline an invitation to celebrate its N.C.A.A. championship at the White House. The move was particularly poignant, editorialized the New York Times news story, “as it highlighted widespread outrage over President Trump’s response to the white-nationalist rally two years ago in Charlottesville.”

The Times did not need to repeat the infamous Trump quote — that there were “very fine people on both sides” of Charlottesville’s deadly Unite the Right rally — because every sentient creature in the universe has heard it. Through a process of telephone tag-like repetition, the quote has morphed into a defense of Neo-Nazis and Klansmen. Most recently, Democratic Party presidential candidate Joe Biden criticized Trump for assigning “a moral equivalence between those spreading hate and those with the courage to stand against it.”

Trump is a repellent person in many ways: for his egotism, his sexism, his amoral business practices, his bullying, his carelessness with the truth, his outright lies, and his bull-in-a-china-shop approach to governance. You don’t have to make stuff up to find Trump a grievously flawed individual. But the president’s very real defects appear to be insufficient to feed the Left’s all-consuming hatred of him. While the president routinely and carelessly makes misstatements of facts along with deliberate lies, the Left and its media allies make up lies of their own. And the “very fine people” controversy, germinated here in Virginia, is one of the biggest.

Normally, I steer clear of any controversy relating to Donald Trump on this blog because: (a) Bacon’s Rebellion focuses on Virginia public policy issues, not national ones, and (b) in my personal experience I have found that it is impossible to carry on a reasoned conversation about the man. All too frequently, conversations between friends degenerate into shouting matches. I make an exception in this case because the controversy originated in events that took place in Virginia, and Trump’s statements have become entangled with Virginians’ interpretation of those events.

By way of preface, let me state my theory of why this particular controversy has legs. The first reason is that Trump can be remarkably inarticulate. He is imprecise. He meanders. He garbles facts. He can leave people confused about his meaning. The other reason is that Trump’s enemies aren’t interested in understanding what he meant; they want only to assign meaning to his words that confirm their own narrative of Trump as racist and borderline fascist.

Trump made a series of statements regarding the Charlottesville clash. In his  first official pronouncement after the tragic events, which resulted in the death of a peaceful counter-protester, the president tweeted: “We ALL must be united & condemn all that hate stands for. There is no place for this kind of violence in America. Lets come together as one!” Then, reports the Washington Post:

About two hours after the president’s tweet, Trump expanded with four-minute statement that began: “We condemn in the strongest possible terms this egregious display of hatred, bigotry and violence on many sides.” He then added for emphasis: “On many sides.”

The next day, as reported by the WaPo, Trump issued a more forceful denunciation: “Racism is evil, and those who cause violence in its name are criminals and thugs, including the KKK, neo-Nazis, white supremacists and other hate groups.” He continued:

As I have said many times before, no matter the color of our skin, we all live under the same laws, we all salute the same great flag, and we are all made by the same almighty God. We must love each other, show affection for each other and unite together in condemnation of hatred, bigotry and violence.

None of these statements sufficed for Democrats or the media. Under pressure to elaborate, Trump made a third set of comments (with critical phrases highlighted):

REPORTER: You said there was hatred and violence on both sides —

Here’s the nub of the problem: Trump appeared to be conflating the Unite the White rally, which consisted almost exclusively of white supremacist groups, with more mainstream groups that had protested the removal of the statues of Civil War generals in Charlottesville and elsewhere. That’s what happens when you talk off the cuff without checking the facts, as Trump does routinely.

When he said there were some “very bad people” on both sides, however, Trump was speaking accurately. The violence in Charlottesville was two-sided. Just as white supremacists descended upon Charlottesville from around the country, so did radical Antifa types. Both sides became armed for hand-to-hand combat, and both sides initiated attacks on the other. It is not engaging in “moral equivalence” to state that both sides committed acts of violence. One can argue that one side was morally righteous while the other was not, but one cannot pretend that only one side violent.

Where Trump went astray was to suggest that mainstream defenders of statues of Civil War generals and slaveholders like Thomas Jefferson and George Washington participated in the United the Right rally. As he stated incorrectly: “You had many people in that group other than neo-Nazis and white nationalists.”

If such people participated in the Unite the Right rally, their numbers were insignificant. In this regard, Trump was flat-out wrong. The statement typified his carelessness with facts. Trump’s enemies have every justification for criticizing this sloppy rendition of events. The American people have a right to expect their presidents to be well informed. Sadly, with Trump, even people who broadly support his policies cannot believe a word that issues from his mouth — not upon his authority  anyway.

It is equally false — perhaps more so, coming from those who purport to be arbiters of the truth — to describe Trump on the basis of his Charlottesville proclamations as racist. He repeatedly denounced the white supremacists. He repeatedly denounced the violence. But Trump was not the only one to overlook important facts. So do those who deny that violence in the Charlottesville riot emanated from extreme leftists as well as from the far right. Asserting that the anti-fascist militants were morally in the right does not erase the reality of their actions.

If you re-frame the issue as a controversy over the propriety of maintaining the General Lee statue in Charlottesville — as Trump was trying to do, albeit on the basis of inaccurate information — it is not unreasonable to say that there are “very fine” people on both sides. I’m one of those people. I detest Neo-Nazis, Klansmen and white supremacists but I support keeping most of the statues. (I’m not a fan of the Jefferson Davis statue in Richmond.)

Unfortunately for my cause, Trump thoroughly muddled the issue. But garbling the facts about who attended the rally doesn’t make him a neo-Nazi sympathizer — and it doesn’t make his haters right.

Trump, His Haters, and the Truth about Charlottesville was last modified: April 30th, 2019 by Guest Contributor James Bacon