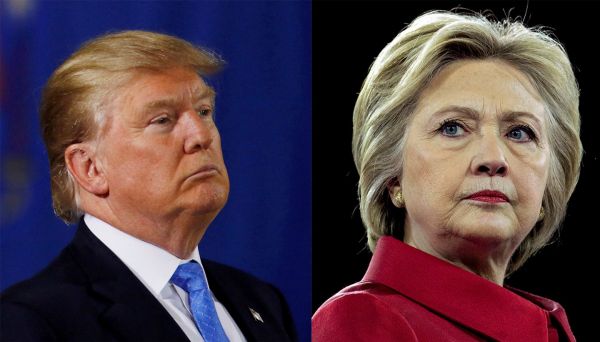 Trump Moves Ahead of Hillary in the Polls–Is it Time for Democrats to Feel the Bern?

For the first time the RealClearPolitics average of Presidential polls shows Trump in the lead by .05%.

According to the latest ABC News/Washington Post poll of 829 registered voters Trump leads by 2%, 46% to 44%. Â Since March Hillary has trended down while Trump’s trends are up. Â Complete poll results here.Â Â The poll also showed both candidates with very high unfavorable ratings, Trump at 60% and Hillary at 53%. Â This makes these two candidates the least popular Presidential candidates since the Washington Post began polling in 1984. Â More on the battle of the negative ratings here, where the Trump and Clinton are very close, with the public viewing them both unfavorably. Â Bernie Sanders does much better with an unfavorable rating of only 38%. Â When asked who is likely to win the election, 50% said Hillary and 40% said Trump. Â In the age breakdown, more younger voters prefer Hillary while older voters (those over 40) prefer Trump.

In the Rasmussen Poll earlier in the week Trump’s lead was even greater, Trump at 42%, Hillary at 37%.

Looking at the polling, if Democrats really want to win the Presidency they need to ditch Hillary and feel the Bern with Sanders. Â Sanders beats Trump in every poll since the end of December by an average of 10.5%. Sanders has out raised Clinton for the last 4 months in a row. Â If Clinton begins to lose Super Delegates support, she will lose the nomination.

Trump Moves Ahead of Hillary in the Polls–Is it Time for Democrats to Feel the Bern? was last modified: May 22nd, 2016 by Jeanine Martin

Polls do not exist to impart good information. Polls
exist as propaganda designed to manipulate the public mind.

Polls
are horse blinders for low information ‘voters.’ Better to advance our
true and just cause than walk about on quaking bogs.

Corker?? Are they kidding? How to crash a campaign with a simple announcement.

quite sad that any actually is cheering for Trump

Still really sorry about your butthurt

Wasn’t it Rasmussen that had Romney ahead in ’12? How’d that one turn out?

When will people ever learn?

I have been trying to track the internals of some of these polls. The Fox News one had a D/R/I split of 40/41/16, but the Post had a higher D/R ratio. To some extent, it may be euphoria about Trump having clinched the nomination (which may fade, just like it did with McCain in ’08). Trump has been more aggressive out the gate attacking Hillary, which Romney did not do attacking Obama in 2012.

I’m not saying you’re wrong, but one election year is never exactly like another (especially this one).

RR3 – Obama was a good candidate. Hillary is a shitty candidate. When will people ever learn that Hillary is physically unappealing and her voice is irritating. She is also dishonest, corrupt, and totally unable to connect with average folks. If Trump plays is smart, he can win by five to six points.

The media is in charge, polls don’t mean much, it’s just to far out.

I don’t like either candidate. However, if Hillary is the nominee, and does not face legal problems, in the end the media will throw Trump under the bus. Until then, expect a media controlled neck to neck horserace for the ratings.

I wouldn’t bet a nickel on any poll of Rasmussen. Do your homework.

I believe you have a very fundamental misunderstanding of the whole predictive value of negative poll ratings as they predict final voter choice in the election process, as well as, in the basic underlying heuristics of polling science. If you do a little reading on polling science you will discover that negative favorability polling results are largely useless in predicting final voter candidate selection. Reflect for one second on the current Democratic and Republican primaries as a simple example. The two candidates that have consistently polled the largest negative results both end up on the final nomination path.

Trump for example has lead this negative polling result when there were 16 fellow candidate competitors and also when he was largely head to head with Cruz (Kasich having been largely negated yet he lead all polls among Republicans regarding unfavorability opinions!). I can’t say I understand completely what your final point to this all is other then perhaps to imply that Sanders would be a more likely candidate to defeat Trump rather then Clinton based on unfavorability ratings which is patently false if that is the only criteria you are applying, but regardless, a rather odd blog article providing I suppose what one could call advice to the Democratic party’s candidate selection process, coming from a conservative Republican blog. I’m sure Bernie would appear all in with the drift here though.

Many of those posting are bitter Cruz supporters. This article is meaningless.