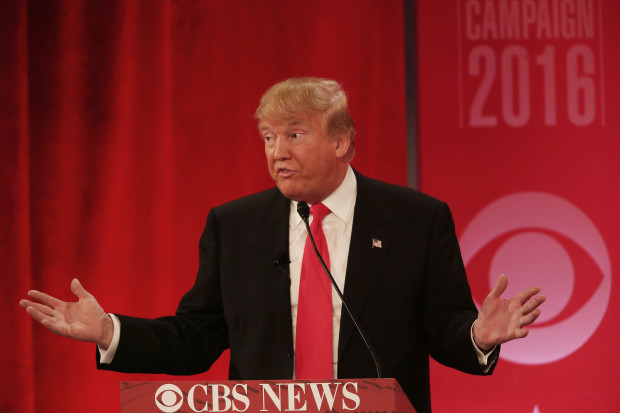 The Republican Presidential debate in South Carolina was held in the wake of the heartbreaking news that Supreme Court Justice Antonin Scalia had passed away.  Justice Scalia was a great man who fought tirelessly to preserve and protect our Constitutional freedoms from governmental overreach.  His passing brings what is at stake in this election, and especially the Republican primary, into stark and brutal clarity.

Despite this new reality, however, Donald Trump showed his true colors and clearly demonstrated why he should not be the Republican nominee, and why he would destroy the Republican party if we nominate him to face Hillary Clinton.  In the middle of a REPUBLICAN debate Donald Trump declared his support for numerous DEMOCRAT positions and talking points.  He repeated the tired old “Bush Lied/People Died” fiction made famous by MoveOn.org.  He repeated his support for Planned Parenthood and their “wonderful things having to do with women’s health.”   He continued his support for using eminent domain to take people’s homes for his casino parking lots.  He even blamed George W. Bush for the 9/11 terrorist attacks.

During the debate Trump called himself a “Common-Sense Conservative.”  Memo to Trump supporters:  That is what Moderates and Liberals call themselves when they want to trick Conservatives into voting for them.  When you have to add a qualifying adjective to the term “Conservative,” it means you are not a real Conservative.  It means you want to call yourself Conservative to get votes, but don’t want to be expected to defend all those wacky things real Conservatives believe in like the sanctity of life, the sanctity of marriage, the 2nd amendment, religious freedom…you know, the basic moral and constitutional fabric of our society.

When he was confronted by Jeb Bush and Ted Cruz, Trump reverted to the “Liar, Liar, Pants on Fire” defense.  He interrupted people, slung nonsensical insults around the room, and made it painfully obvious that he does not have the temperament to be President of the United States.  I read some columnists comparing it to dealing with an angry drunk, but an angry drunk doesn’t know any better.  Trump does.  Trump is more like that one person we all know that has to insult other people in order to make themselves feel superior and when called on it, they hide behind the claim that they’re just “telling it like it is.”  If Trump thinks he is showing us how tough he is with these antics,  he needs to reconsider.

Jeb! Bush went for the jugular with Trump, and tried to go toe-to-toe with the him on his attacks against President George W. Bush.  South Carolina is where George W. got his campaign back on track by soundly defeating John McCain, and Jeb! is definitely hoping for some of that same magic.  While Jeb! was able to deliver some solid blows against Trump, he didn’t really look comfortable doing it, and he came off looking stiff.  I would have thought he would have shown a little more passion while defending his own family members.  George W. Bush is still very popular in South Carolina, but whether some of that will rub off on Jeb! remains to be seen.

Ted Cruz had a strong debate.  He gave solid, substantive answers, and was the most effective in dealing with Trump.  Instead of just calling him a rude bully like Bush, Cruz instead treated Trump’s tantrum like one would treat an unruly child, then launched an assault on Trump’s liberal positions, pointing out that Trump supports Planned Parenthood and would appoint liberals to the Supreme Court.  The Donald must have gotten confused at this point, because he interrupted his, “Ted Cruz is a nasty liar” tirade to confirm his support for Planned Parenthood.  Here is more proof of that Planned Parenthood support, and here is the type of Liberal judge Donald Trump wants to appoint.  Ted had a good debate, and has a great opportunity in South Carolina, but to take advantage of that he needs to peel away some of Trump’s conservative support.  By attacking Trump’s liberal positions, Cruz was attempting to do just that.

Marco Rubio had a good debate, until he decided he liked Trump’s “you’re a liar” routine so much he tried to use it against Ted Cruz.  Rubio re-launched his previously debunked attack that Ted Cruz used to support amnesty, even going so far as to claim that Cruz couldn’t speak Spanish, to which Cruz promptly challenged Rubio (in Spanish) to continue the debate in Spanish.  Rubio did not attack him again the rest of the night.  Also, while Bush and Cruz were launching broadsides at Trump, Rubio shied away from  engaging Trump man to man, preferring instead to let others do the real fighting.

John Kasich seems to be running to be “Best Friend of Everybody in America” instead of President.  While the other candidates were battling it out, Kasich was breaking out his guitar to start a round of “Kumbaya.”  When he wasn’t chastising the rest of the candidates, however, he was extolling the virtues of Obamacare while he tried to defend his expansion of Medicaid over the objections of the Ohio General Assembly.

Ben Carson should have dropped out after New Hampshire and saved everybody the embarrassment of another debate where everybody forgets he’s on the stage.  Seriously, even when he was directly mentioned by the other candidates, the moderator didn’t even want to bother letting him respond because at this point nobody cares what he has to say.  It’s almost getting as bad as Admiral Stockdale in the 1992 Vice Presidential debate.

The good news that came out of this debate is that we are finally seeing the other candidates on the stage take the gloves off with Donald Trump, and just like any bully, Trump has a glass jaw and very thin skin.  When challenged, Trump self-destructs.  All of the other candidates need to start dealing with Trump the exact same way, and reveal the real Trump to the voters because if this man gets the nomination, God help us all.