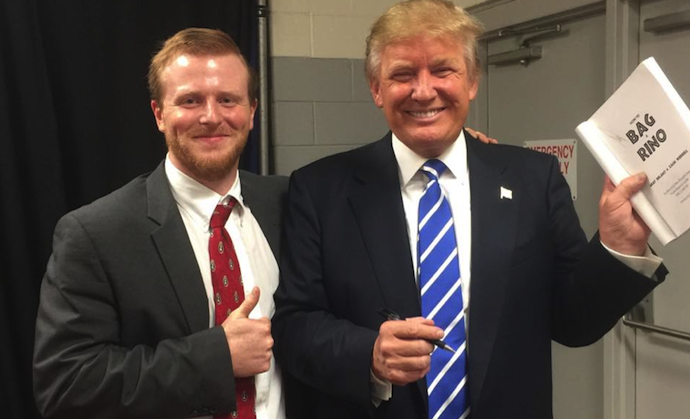 Last night, I attended the Donald Trump rally at Richmond International Raceway, and it is a night that I will likely not soon forget. To me, an event like this is like the political junkie’s equivalent of the Super Bowl. Even if your team isn’t playing, you just can’t say no to going if you have the chance.

(Full disclosure – I am assisting the Ted Cruz campaign. Ted is my top choice for a number of reasons, but just because I am a Virginia Tech Fan doesn’t mean I won’t go root for UVA against Duke… Just sayin’).

By the time I showed up, a little before 5:00 PM, the parking lot was already filling up. In the parking lot it was a carnival atmosphere.  There were vendors selling political pins (one was selling Trump, Cruz, and Carson buttons at the same time), food trucks, laughs, cheers, and most importantly… petition signature forms. Much to my surprise, by the time I arrived the line was already wrapped around the side and back of the building.

I have run two pretty important races in the area (for Dave Brat and Vince Haley), put on big candidate rallies, personally door knocked thousands of doors, attended tons of conservative events, in the area.  Quite frankly, I thought that because of this involvement I would know (or at least recognize) a good chunk of the crowd.  However, walking past the long line of eager attendees, the first two things that struck me were the diversity of the crowd, and the fact that I knew literally nobody.

This crowd was made up of people I have never seen before, people who do not normally get involved or engaged in politics…especially not on a perfectly gorgeous Wednesday autumn evening.

Inside, there was a special energy in the air.  Though not quite as chaotic and joyous as the Dave Brat Grassroots Celebration after the defeat of Eric Cantor, I would say this event was the closest I have come to experiencing that atmosphere since. The excitement was palpable, the cheers non-stop.

After a raucous introduction, with speeches by a brilliant pastor, the Henrico County GOP Chair, and a beautiful rendition of the “Star Spangled Banner” and “America the Beautiful,” Donald Trump’s speech was just as we expected.  A stream-of-consciousness soliloquy, with equal parts conservatism, populism, and humor, and a dash of self-deprecating egotism. This speech was not your typical stump speech… especially not one of a top-tier Presidential candidate.

There were no bold pronouncements of intricate policy proposals, no consultant-written applause lines, no rehearsed hand gestures.  In fact, there was nothing written down at all (except for a list of some of the great Virginian Founding Fathers).  I wouldn’t say that his speech was particularly focused; it certainly was not planned with a rise, crescendo, and neat closing. There was also no readily apparent thesis (other than, “I am Donald Trump, I think I am a badass, I think like you all, and I hate the Democrats”). The language was not very elevated, and he spoke in a very colloquial manner.

But all those things (combined with his celebrity) are precisely the reason why Donald Trump is able to fill venues like RIR beyond capacity, literally to where the Fire Marshal tried to prevent any more people from entering.

Donald Trump talks about conservatism in a different way. He is not speaking to the policy wonks, nor the consultants, nor the operatives, and not even the heavily involved activists.

No, Donald Trump speaks about the issues in a way that the average Joe – who is sick of politics, the propaganda mainstream media, and politicians in general – talks to his family, friends, and coworkers. He brings the political discussion down a few notches, and while some think this a negative, I actually believe it is his greatest strength.

The people attending this event were quite literally a cross section of America. There were the young, old, and middle aged; the very well dressed and the mechanic still in his greasy overalls; the politicos and the disaffected; there were White folks, Black folks, Hispanics, Asians, and apparently even a few Democrats.

The crowd was very receptive to Trump, and there were many points in the speech where he almost lost control of the crowd – because they were shouting with such exuberance.  At one point, a crowd of perhaps a dozen Bernie Sanders supporters took it upon themselves to disrupt The Donald – which Trump took in stride and to which he responded by politely reminding the crowd of their 1st Amendment Rights.  Naturally, the crowd responded to that by breaking into overpowering chants of, “Donald Trump!” or, “We Want Trump!” and even a few “U-S-A!”s. (I may have started one of the USA chants, but who’s keeping track).

After probably 20 minutes of being incredibly rude though only slightly disruptive, the authorities escorted the protesters out.  This was the only ‘low point’ of the night if you can call it that, but it hardly counted as a blemish on the night overall for Team Trump. The event was well organized, well attended, and went off without a hitch (other than the rude Leftists and ‘Hey Jude’ disrupting the otherwise high energy music mix).

If Donald Trump can sustain this energy and enthusiasm, he will be very hard to beat.  There is no doubt that Richmond (and beyond) is buzzing about his appearance.

What remains to be seen is if he has reached his apex, if he has plateaued, or, perhaps if he is beginning to build even more momentum.

The most concerning aspect of Trump’s candidacy for the Left is the fact that the crowd was not white as Wonderbread. If Donald makes it past the primary, then they have to be quivering at the thought of a Trump candidacy that peels off 25% of the Black vote, and 40-50% of the Hispanic vote.

Remember, politics is a long ball game. There is no telling how the huge number of undecided voters will fall, nor where the supporters of the candidates who eventually drop will go.  But for now, it looks like ‘the Donald’ has positioned himself quite nicely in this chaotic, wide open Republican Presidential field.

Zachary Werrell is a political consultant, commentator, and author. He is best known for managing Dave Brat’s historic upset of House Majority Leader Eric Cantor. His new book, “How to Bag a RINO” is coming out on October 20th, and is available for preorder here.