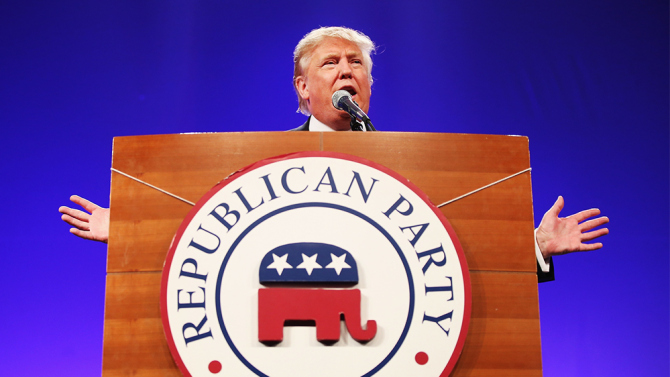 Trump Threatens to “Go it Alone”

Angry with Republican leaders, Donald Trump is threatening to ‘go it alone’ without the Republican party. From CNN.com:

Trump went on to tell Republicans to sit down and shut up,

How can Trump possibly go it alone?  He has virtually no campaign infrastructures in place.  He has no organization.  He needs the RPV, their resources and their ground game.  Trump has said he could self fund but that’s not realistic.  To get a billion dollars he would have to sell a lot of property and other investments. He doesn’t have a billion in cash sitting around.  He needs RNC to help him fundraise.

Trump is a bully, unworthy of our nomination. My love for our country eclipses my loyalty to our party, and to live with a clear conscience I will not support a nominee so lacking in the judgment, temperament and character needed to be our nation’s commander-in-chief. Accordingly, if left with no alternative, I will not support Trump in the general election should he become our Republican nominee.”

Conservative Congressman from Nebraska Ben Sasse has made it clear he won’t support Trump,

If Trump becomes the Republican nominee my expectation is that I’ll look for some 3rd candidate – a conservative option, a Constitutionalist.”

The former Governor of New Jersey Christine Todd Whitman when asked if she would support Donald Trump for President she said:

The Congressman from Florida’s 26th district Carlos Curbelo said this about Trump:

This man does things and says things that I teach my 6- and 3-year-olds not to say. I could never look them in the eye and tell them that I support someone so crass and insulting and offensive to lead the greatest nation in the world.”

There are so many others who have also said they won’t support or vote for Trump including Jeb Bush and Lindsey Graham.  To read more quotes from Republicans who aren’t supporting the presumed nominee can be found on the bottom of this page.