In a result that surprised no-one, Donald Trump ran away from the rest of the field to take first place in the New Hampshire primary.  In a state that likes to buck the results of the Iowa Caucus, Donald Trump clearly was dominant, taking 35% of the vote.  The most interesting story of the night, however, was what happened below him.

New Hampshire was a make or break state for many candidates, and 4 of them pretty much bet their entire campaigns here.  Jeb! Bush spent $36 million in NH and ran over 11,000 TV commercials.  Chris Christie campaigned there endlessly, spending most of his money there.  John Kasich practically lived there, spending more time in NH than any other candidate.  Marco Rubio bet his campaign on what he called his “3-2-1” strategy (Finish 3rd in Iowa, 2nd in NH, and 1st in SC), hoping his “Marcomentum” would carry him through.

In all, nearly $100 million was spent on the race in NH, and almost none of it was spent targeting Donald Trump.  It almost seemed as if the rest of the field (especially the “establishment lane” candidates) conceded 1st place to Trump weeks ago while they all jockeyed amongst themselves to determine who among them would rise as the “establishment” standard-bearer.

When the dust settled, the results left the establishment candidates in more of a muddle than ever before.  Kasich claimed a clear second place finish behind Trump, taking 16% of the vote.  Ted Cruz finished 3rd with 12%.  Bush essentially tied Rubio with 11%, but officially finished above him at 4th by about 1000 votes.  Rubio finished 5th, and Chris Christie finished in 6th at 7% and has returned to New Jersey to “consider things.”  Carly Fiorina and Ben Carson finished in low single digits.

On the Democratic side, Bernie Sanders gave his swan song to the Leftist wing of the Democrat party by trouncing Hillary Clinton in a meaningless contest.  His victory was fueled in large part by his dominance with the youth vote.  This was the only state where Bernie Sanders has ever led in polling, and he had to camp out there and represent neighboring Vermont for decades to do it.  In every other state around the country Hillary Clinton has an average lead in the polls of over 20 points.

To truly understand how pyrrhic this victory was, consider this:  Bernie Sanders won 60% of the popular vote, but because of the way the Democrat party awards delegates to their convention, Hillary Clinton actually won just as many delegates as Sanders (15 to 15).  How’s that for a kick in the teeth, kids?

Back to the Republican side, looking forward to South Carolina and beyond presents an interesting scenario.  Look at these numbers: 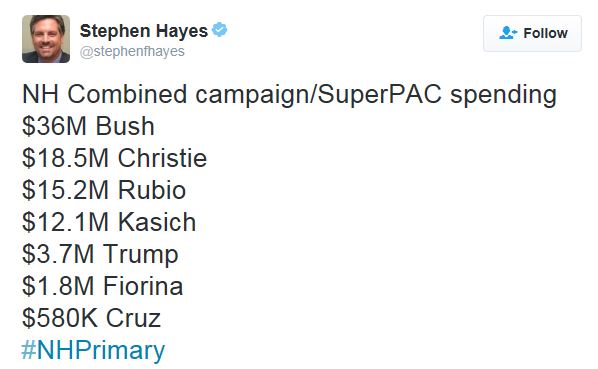 Ted Cruz spent less than one third of the money spent by Carly Fiorina and spent less time in NH than any other candidate, and was able to take third place in a state that is hostile to his candidacy.  Without even trying, he beat three of the four candidates who bet everything on NH, and the only one who finished ahead of him (Kasich), has no money left, and no organization outside of NH to speak of.  According to Erick Erickson at “The Resurgent,”

Cruz now has more money on hand than much of the rest of the GOP field combined and more than any single GOP candidate.

As the race moves to South Carolina, and then on to the SEC Primary, the candidates are entering territory that is much more favorable to Cruz, and less so to Bush, Kasich, and Rubio.  Between March 1st and March 15th there are 27 states that will vote, most of them Southern and Midwestern states.  With that many friendly states stacked up on top of each other in a 2 week sprint, Cruz can use his money advantage and superior organization to great effect, and with the “conservative” lane clear of competitors he can work to consolidate that support around his candidacy.

Even though John Kasich lived to fight another day, it will only be one more day as South Carolina will end his bid for the Presidency.  Kasich was hoping he could hold on until March 15th when Ohio’s “winner-take-all” vote could give him a voice at the convention, but it’s not going to happen.

South Carolina will also likely end the campaign of either Jeb! Bush or Marco Rubio.  With Trump and Cruz currently 1st and 2nd in South Carolina polling, it is shaping up to be a battle for third for these two.  Bush has spent more money than any other candidate and will have his brother, former President George W. Bush, campaigning for him.  Rubio desperately needs to rebound from his “Marcobot” debate collapse, and will be counting heavily on endorsements from the likes of Sen. Tim Scott and Congressman Trey Gowdy.  If Bush can beat Rubio again in South Carolina, I’m not sure how Marco continues on.  Additionally, even if Jeb! beats Marco, but cannot finish higher than a distant third, he is going to have to justify to his donors how he has a path to the nomination.

As for Trump, we will have to wait and see.  He has already done and said more things that have ended the candidacies of far better candidates than him, and he is still standing.  Unlike New Hampshire, the other candidates will not be holding their fire on him from here on out.  We will see how he handles the constant fire that Ted Cruz and Marco Rubio have had to endure.

Hold onto your hats, folks.  The ride just gets bumpier from here.

Stick a fork in Rubio.

Its time for the RNC to drop him off at the lab for an overhaul. Check his circuit boards, upgrade the firmware, and try it again in 4 or (hopefully) 8 years.