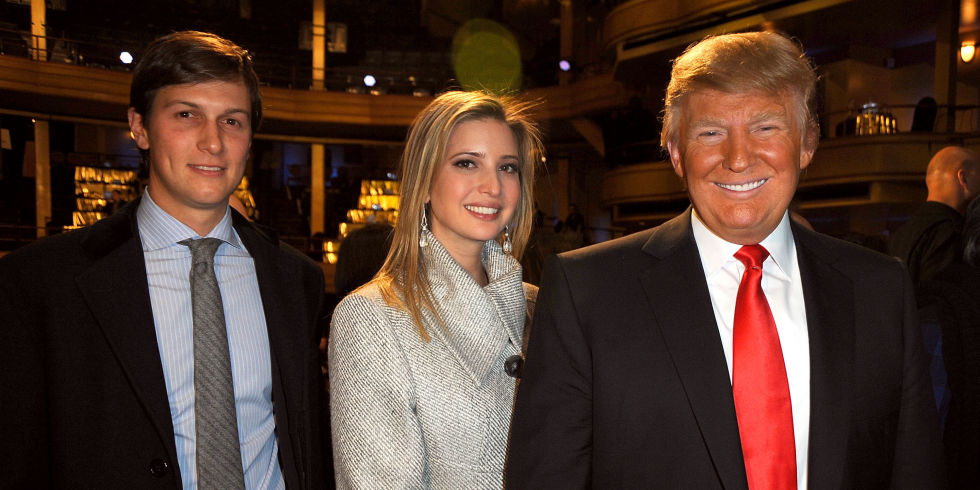 Jared Kushner, son-in-law of Donald Trump, has been appointed a White House senior advisor in the Trump administration. He is the husband of Trump’s daughter, Ivanka. The Kushners recently bought a house in the Kalaroma neighborhood of Washington DC, around the corner from the Obama’s new digs. More on the story here.

Donald Trump’s daughter Tiffany will fill in the gap at her father’s
presidential inauguration, after several mainstream Hollywood acts
passed on the opportunity to perform in front of 63,000,000 TV viewers.
She will sing Nelly Furtado’s hit song “I’m Like a Bird,” Mark Burnett’s
production company has announced. Producer of the Apprentice and
Survivor, Burnett is producing the inauguration.

It should surprise no one that Tiffany Ariana Trump, 23, an American
internet personality, singer and model, will be the star of her
father’s inauguration. Often called the Jan Brady of the Trump clan,
Tiffany is the only daughter of the President-elect of the United
States, Donald Trump, and his second wife Marla Maples. She is expected
to enroll at Harvard Law School in the fall. Nevertheless, she is a
Youtube personality, with no less than six hits garnering more than
100,000 views.

Trump released a music single called “Like a Bird” in 2014, while
attending the University of Pennsylvania. She later told Oprah Winfrey
that she was evaluating whether to take her music career “to the next
level as a professional”. Tiffany has also worked as an intern at Vogue
and modeled for a 2016 Andrew Warren fashion show during New York
Fashion Week.

This entire family is white trash. I’m an old redneck. I know white trash when I see it.

John McCain has turned over to the FBI a 35-page dossier compiled by British intelligence services on the Trump-Russia-Putin connection. Someone — probably on McCain staff — leaked the 35-page document — here it is:

My favorite part is about Trump engaging in “sex parties” in St. Petersburg, Russia, hotels with Russian hookers . . .