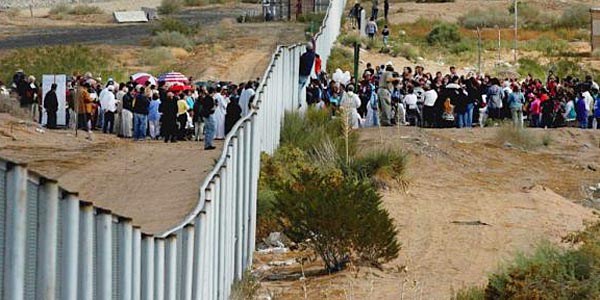 That’s because two out of every three illegal aliens don’t sneak across the border. They legally come to America as students, tourists, or guest workers—and then overstay their visas.

Rep. Lamar Smith (R-TX) recently introduced a bill to prevent anyone unauthorized to work in the United States from competing with American workers. The Legal Workforce Act would require all employers to use E-Verify.

This online program instantly checks whether newly hired workers are authorized to work in the United States.

Mandatory E-Verify would prevent existing illegal aliens from working. And it would deter new ones from coming. Without competition from illegal workers, Americans would have an easier time finding jobs and winning pay raises.

The promise of higher pay keeps America’s 8 million illegal workers from returning to their home countries. The average low-skilled worker from Mexico can earn ten times as much in the United States.

Competition from these illegal workers drives Americans out of their jobs. Workers from Mexico have displaced African-American laborers in multiple industries in Atlanta, Chicago, and Los Angeles, according to a study by Stanford and Princeton researchers.

Illegal immigration also depresses wages for Americans. “A one percentage point increase in the share of undocumented workers [in the workforce] can be expected to reduce earnings of [legal] workers by six percent across all sectors, on average; by 26 percent in construction; and by four percent in leisure and hospitality,” according to a Federal Reserve Bank of Atlanta report.

E-Verify would relieve these beleaguered American workers. The free online site cross-references newly hired workers’ I-9 employment eligibility forms — which everyone must submit after accepting a job offer — with their Social Security numbers, visas, and other identification documents.

In five seconds or less, the system spits out one of three results. E-Verify may confirm an applicant is authorized to work in America. It may issue a “tentative non-confirmation,” which a new hire can appeal. Or in rare cases, E-Verify may ask an employer for more time to return an answer.

The system is exceedingly accurate. Employers used E-Verify 24 million times from October 2015 to June 2016. Nearly 99 percent of cases were approved immediately. Of the 1 percent of cases that were tentative non-confirmations, 86 percent were found to be illegal aliens. Last year, E-Verify stopped over 50,000 illegal aliens from entering the workforce.

The resource is easy for employers to use. More than 700,000 companies across the country already vet new hires through E-Verify. As of March, 19 states required all or some employers to use E-Verify.

Many of those states have successfully deterred illegal immigration and boosted job opportunities for citizens.

Consider Georgia. In 2011, Georgia imposed penalties for private employers who didn’t use E-Verify. Since then, the state has cut its illegal alien population by 25,000, according to the Pew Research Center.

Or look at Arizona. After the state mandated that employers use E-Verify in 2008, the illegal alien population decreased by 40 percent in four years. The average low-skilled, native-born, white male worker in Arizona saw his annual wages rise by more than $5,000 following the state mandate. Phoenix workers recently enjoyed the highest wage increases of any municipal area in the country.

Making E-Verify mandatory nationwide would give millions of American workers a raise.

Such a reform would also compassionately deter future illegal immigration. Since foreigners would no longer be able to illegally obtain jobs, they’d have no reason to risk their lives crossing the border. They wouldn’t choose to overstay visas and live in the shadows.

And they wouldn’t bring their young children. So there’d be no need for future amnesties like DACA, the Deferred Action for Childhood Arrivals program, which gave temporary lawful status to about 750,000 illegal aliens who came to the United States as children.

Unless America switches off the jobs magnet, illegal aliens will continue to put their kids in untenable situations. As House Judiciary Chair Bob Goodlatte put it, “We can’t fix the DACA problem without fixing all of the issues that led to the underlying problem of illegal immigration in the first place.”

While a barrier on the border can be very effective against illegal crossings, it can’t stop everyone. As long as U.S. employers are allowed to hire people who are illegally in the country, illegal immigration will continue to be a major problem.

By making E-Verify mandatory, Congress could shut down illegal immigration and boost employment opportunities and wages for American workers.