Trust the Government, Ebola is Under Control; UPDATED Patient lied about exposure

Ebola has hit the United States by way of a traveler from Liberia.Â  According to the CDC, everything is under control.[read_more]

[quote font=”0″ color=”#001c5e”]â€œThomas Eric Duncan left Monrovia, Liberia, on Sept. 19 aboard a Brussels Airlines jet to [Brussels] After layover of nearly seven hours, he boarded United Airlines Flight 951 to Dulles International Airport in northern Virginia. After another layover of nearly three hours, he then flew Flight 822 from Dulles to Dallas-Fort Worth International Airport, the airline confirmed.â€Â  Source.[/quote]

[quote font=”0″ color=”#001c5e”]â€œDuncan first felt sick Sept. 24 and went to the hospital in Dallas. But staff didn’t suspect Ebola then, so he went home. He came back by ambulance on Sept. 28. He’s now critically ill in isolation in the hospital’s intensive care unit.â€Â  Source.[/quote]

[quote font=”0″ color=”#001c5e”]â€œMr. Duncan, the first person to develop symptoms outside Africa during the current epidemic, had direct contact with a woman stricken by Ebola on Sept. 15, just four days before he left Liberia for the United States, the womanâ€™s parents and Mr. Duncanâ€™s neighbors said . . . Turned away from a hospital for lack of space in its Ebola treatment ward, the family said it took Ms. Williams back home in the evening, and that she died hours later, around 3 a.m.â€ Â Source.[/quote]

[quote font=”0″ color=”#001c5e”]â€œThe incubation period, that is, the time interval from infection with the virus to onset of symptoms is 2 to 21 days. Humans are not infectious until they develop symptoms. First symptoms are the sudden onset of fever fatigue, muscle pain, headache and sore throat. This is followed by vomiting, diarrhoea, rash, symptoms of impaired kidney and liver function, and in some cases, both internal and external bleeding (e.g. oozing from the gums, blood in the stools).â€Â  Source.[/quote]

The CDC and others brief the public

Dr. Thomas Frieden director of the CDC has claimed that Duncan first exhibited symptoms around September 24th, that Duncan went to the hospital on the 26th where he was sent home with antibiotics, only to return on the 28th.

[quote font=”0″ color=”#001c5e”]Per NPR:Â  â€œBut passengers on the plane with the man were not exposed to Ebola, Frieden said. â€˜There is zero risk of transmission on the flight. He was checked for fever before getting on the flight.â€™â€[/quote]

[quote font=”0″ color=”#001c5e”]Frieden went on to state â€œ[I] have no doubt that we will control this . . . importation of ebola so that it does not spread widely in this country.â€[/quote]

Dr. David Lakey the Commissioner of the Texas Department of State Health Services, in addition to downplaying the infectiousness of ebola and explaining that â€œtop notch careâ€ was being provided to Duncan also stated â€œthis is not west Africa . . . the chances of it being spread are very, very slim.â€

It is likely that those treating Duncan now are able to take sufficient steps to prevent against further spread from Duncan.

The problem is for those who came into contact with Duncan shortly after the onset of symptoms.Â  The system for identifying exposure and preventing further transmission is referred to as contact tracing.

The CDC has provided the following flow chart to understand contact tracing, which involves identification, and monitoring of exposed individuals. 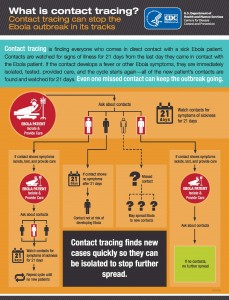 There are two significant gaps in this process dependent on the patient.Â  The first problem is in determining when the symptoms start, the second is in identifying with whom the patient has contact after exhibiting symptoms.

Duncan knowingly had significant contact with a person who had advanced stage ebola.Â  Duncan then entered a plane within days.Â  We do not know when he bought his plane tickets.Â  If the tickets were purchased within days of the flight, chances are he knew he had ebola or that it was likely he had ebola and was trying to get to the U.S. where he could get better treatment.Â  Even if he had purchased the tickets far in advance, he would not want to be stopped from coming to the U.S. so he would avoid any admission of contact with a sufferer of ebola.Â  In both instances, he purposefully hid his experience in order to make it across the Atlantic.

UPDATE: Shortly after publishing, the AP started reporting that Liberian officials will be prosecuting Duncan for having lied on his exit forms about exposure to ebola.

If he was willing to hide his contact with ebola, one can easily imagine he might not be forthright about the timing of the onset of symptoms, or with whom he came into contact.

Additionally, even if he is being completely honest, there is no way to verify that he remembers everyone he came into contact with after the onset of symptoms.

Incentives for the government to tell the whole truth

So instead, the remaining incentive is to tell most of the truth to prevent a panic for two reasons.Â  First, panic is bad public relations and reflects poorly on the agencies and public officials involved.Â  Second, and more importantly, in order to facilitate the cooperation of those on the contact list it needs to appear as if they have complete control of the situation.

After all the assurances from Frieden and the Texas officials that this is nothing to worry about, there was the implicit threat from Zachary Thompson, the director of the Dallas County Health and Human Services Department, that for those contacts who do not comply with the protocols for reporting, â€œmore stringent guidelines will be put in place.â€

I know public officials do not want to create a panic, but we are not receiving the whole story…

Trust the Government, Ebola is Under Control; UPDATED Patient lied about exposure was last modified: October 2nd, 2014 by Paul A. Prados

[…] I pointed out then that the authorities knew they had gaps in information and purposefully obfuscated the fact that they did not know. […]

The media continues to report that during his first visit to the ER, he was sent home by a nurse, apparently with a prescription?

Did he see a doctor the first time at the ER? Did he tell the person he saw at the ER that he had recently been in Liberia?

Did he have health insurance? If not, is that the reason further testing was not done?

These are questions that need to be asked, and answered truthfully.

Actually, you asked these dumb questions in a different post. What would you learn com these that you must know? why do you think there is a big conspiracy going on?

His past history would indicate that.

thanks for taking note. He is also on the record for saying the federal free and reduced lunch program is a waste of tax dollars. He says that the only people in the country who are hungry are those that want to be hungry.

I remember when Jesse Helms wanted to deduct $15 per week out of family’s food stamp money because he said that free school lunches should be recouped.

The first visit he was sent home. Hospital officials claim they thought he had a common viral infection and gave him antibiotics. Antibiotics of course will not counteract a viral infection, but it is standard practice with most doctors to prescribe antibiotics even when a virus is suspected, just in case it is bacteria, and also to placate the patient.

He was seen by a doctor in addition to nurses.

He told a nurse or nurse’s assistant he had recently been in Liberia in response to a specific question about travel outside the country. This information did not make it to the doctor who actually saw him. The ER is trying to be very careful about how they describe the ER visit on the 26th because they know they messed up.

Thanks for the info.

Not sure what the potential lack of insurance has to do with this topic. Or even if going to the ER actually suggests the lack. Without more details, this is nothing but speculation.

Given the Fed’s recent handling of the ‘kids’ on the border and how they were then shipped around the country, no sane person should feel comfortable with the government’s assurance that they have everything under control.

Indeed. There was a time, now long ago, when public health folks were relentless in chasing contagious diseases and they took no crap from anyone who did not comply. We are kinder and gentler now and far less capable of dealing with obstreperous carriers.

Let me point out that the gov’t you are talking about, either with this post, the Secret Service posts, or any other, are our neighbors here in Loudoun County. It is not a faceless giant but the same people we see every day.

Yes, they are among my neighbors but they aren’t in charge. That would be Obama. I trust my neighbors much more than I trust anyone in the Obama Administration.

In fact, the ones who stand up and attempt to do the right thing are often targeted and retaliated against like Ron Zermeno

Being a nice or good person, or knowing them personally does not make a person immune from public criticism in a public arena about their public job.

There is a big difference between respecting the hard work that public servants do, and giving deference to their decision making.

Today the CDC refused to tell people on the plane with Duncan that they had been exposed to Ebola. United Airlines will contact the people on the plane to tell them that they were on a flight with Duncan and what they need to look out for. Our government won’t warn people, or try to protect them, but United Airlines will. Why would anyone believe anything the CDC, or any other government agency tells us? More here, from UK reporters, http://www.dailymail.co.uk/news/article-2777375/Were-YOU-flight-America-s-Ebola-victim-United-Airlines-reveals-details-three-flights-Thomas-Duncan-caught-Liberia-Dallas.html

That makes no sense, again. The CDC does not need to tell these particular people precisely because United (and the media) is already doing it

Hey Duh,
The CDC should know who those people and be able to locate and contact them. You think, Duh?