Lots of ink has been spilled about what went wrong Tuesday, and lots more will follow. But let’s not forget the good news coming out of our House of Delegates campaigns.

Republican candidates for House of Delegates seats provide the one spot of nearly unmitigated good news for Republicans coming out of Tuesday’s elections. The House GOP Caucus, led by Speaker Bill Howell (R-Stafford), managed to stay anchored with super-majority (net loss of just one seat), despite the Democrat wave statewide. 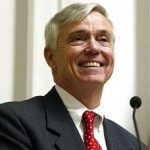 But the House Republicans didn’t just survive. They thrived, garnering an aggregate total of votes statewide greater than Terry McAuliffe. Some endangered incumbents, like David Ramadan, even managed to win by greater margins than they had previously, despite facing millions of dollars of opposition from statewide and national Democrat parties and affiliated groups. For instance, Barbara Comstock and others stared down Nanny Bloomberg’s anti-gun money and won.

When contacted to discuss how this happened, and how the House candidates avoided the fate of Republicans at the top of the ticket, Speaker Howell told The Bull Elephant earlier today that, more than anything else, building and keeping the Republican majority in the House simply comes down to basic, old fashioned shoe-leather politics.

“It’s not rocket science,” he says. “You’ve got to go to the PTA meetings, the Boy Scouts, church functions, and be active and seen in the community.” The Speaker says the House Caucus coaches candidates on ways to maintain superior constituent services, and to communicate regularly and effectively with the voters in each district. Each member of the Caucus also remains in regular touch with the leadership to help stay abreast of relevant issues and trends.

Speaker Howell says House of Delegates campaigns aren’t just a “sometimes” thing in odd year autumns, but require year-round work. “We’re part time legislators, and spend 10 months of the year in our home districts, and have to take full advantage of that time.” Howell said that when legislators lose touch with their communities, they become much more vulnerable. This also creates, he said, the kind of openings that lead to primary ousters of sitting incumbents.

In a year when the airwaves were saturated with lies and misinformation about GOP stances on abortion and contraception, Republican delegate candidates were not completely immune. However, in contrast to distant statewide candidates, Howell credits his members’ closeness to their communities with the opposition’s inability to get the “War on Women” narrative to stick. “It’s hard to think the guy you see at the Wawa or the Eagle Scout Court of Honor is evil. When people see and get to know their legislators personally, it becomes nearly impossible to demonize them.”

Howell also said that the General Assembly’s positive record of accomplishments played a big role. “We’ve got another budget surplus, and have replenished the rainy day fund. On education…we’ve done more on education than the Democrats have ever dreamed of.” As a consummate politician, Speaker Howell knew his audience and during our interview he avoided highlighting the landmark tax and transportation legislation he shepherded to passage this last spring. Nonetheless, while that legislation is deeply unpopular among conservative activists, the Speaker and other supporters have publicly cited this as one reason why certain legislators were able to retain their seats, and how the leadership PACs and individual members have been able to raise significant amounts of money.

Speaking of money, the Speaker’s PAC is swimming in it, having doled out well over $2 million this cycle to members of the House Caucus and the Republican Party of Virginia. Despite that number, though, Howell says that Republicans won this year even though they were outspent significantly, citing sizable infusions from Bloomberg, Howard Dean, labor unions, environmentalists, and national Democrat groups.

The financial resources controlled by Howell and other House leaders was very carefully targeted according to ongoing and detailed analyses of precinct-level voting behaviors and polling results. Complementing the number crunching is a ground game this year that is probably better than the GOP has ever done in terms of identifying likely voters and targeting them with personal contact. Many members also made great use of newer technologies to maximize the impact and efficiency of large-scale coordinated door knocking operations, some for the first time.

Credit Where It’s Due.

What I write below is essentially the same message I delivered to my fellow members of the GOP State Central Committee at a meeting this summer. In the wake of the elections, this has even greater resonance.

A lot (maybe most) of the people that read The Bull Elephant are among those that have opposed some of Speaker Howell’s signature legislative achievements. That includes me. I do not like that a Republican-led House passed the largest tax increase in Virginia’s history, particularly when a good chunk of the money goes to dubious projects that have little to do with solving our most pressing transportation needs. Like others, I prefer a more fundamental level of reform in state government before increasing revenues. I’m sure the Speaker would regard my stance as unrealistic at best. I also wish the legislature had not “left the door open” to Medicaid expansion, a subject I’ve written about before and will write about again in the near future.

However, as Speaker Howell himself once said to me, “If we agree 80% of the time, then we’re friends.” In that sense, most Republicans have no greater friend this election year than the man who had so much to do with gaining and maintaining our majority in the House Of Delegates–currently our only check on the power of future Governor McAuliffe. That doesn’t mean we won’t ever disagree (loudly sometimes), but it does mean that we have a bulwark against the wanton policy madness that is sure to come from T-Mac and his minions.

Thank you, Speaker Howell, and thanks to all the other members of the House Caucus who had a contest this year and won. That gives us something to smile about.