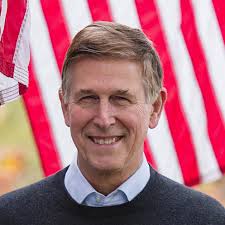 Don Beyer, new Congressman in the heavily Democrat 8th District, has two Republican competing for the Republican nomination next week at the 8th District convention.

Charles Hernick is 34, an economist and environmental consultant who has lived in the district for 5 years. He has raised $18,000 for his uphill battle against Beyer who has raised $1.3 million. Hernick believes 2016 is the year that electorate is ready for change.

“The only thing clear to me about politics this year is that people are hungry for a change,”

Hernick not only believes in climate change but he thinks the government should do something about it.  He describes himself as a ‘moderate’ republican who believes in small business and strong defense.  He has not previously run for office.

The other candidate is Michael Webb who moved to the area in 2008.  He is an a former Army officer, and son of a minister.  From the Washington Post,

Webb a pro-life, pro-gun and anti-debt conservative who is the son of a Christian minister, asserted that Beyer won his 2014 election with 63 percent of the vote because Republicans ignored the importance of African Americans, churchgoers and the business community.

Webb, who is African American, said he is confident that he can put together a coalition that will surpass the typical Republican share of 34 percent of the vote in the 8th District, which includes all of Arlington County, parts of Fairfax and the cities of Alexandria and Falls Church.

Webb is partially self-funding and has not filed an updated financial report with the FEC.  Webb says computer was hacked and he was unable to complete the report.  He says he’s having trouble raising money because local Republicans have not supported him financially.

It is extremely difficult for a Republican to win in the 8th district so I admire these two gentlemen for trying.

I have received more than a thousand emails from Webb over the last two months. He improperly campaigns in his ACUs (with candidate stickers) and has threatened to shoot up the convention and pee on various 8th District Republican officials. Hernick may not be conservative (at all), but if we’re going to have a standard-bearer in the 8th, i t can’t be Mike “Loose Cannon” Webb.

Agreed. I’ve also been among the imaginary cabal he targets in his emails and Facebook posts. Gerald Geddes has NOTHING on Mike Webb.

It looks like “loose canons” get elected President, get on late night television, enjoy 86k PTAT on Facebook, after a general election where the candidate was rejected by 78% of the “establishment GOP,” and have Blue Virginia and Democratic Underground talking about his low profile, non-partisan school board race eleven months before an election while the establishment that backed a “self described moderate” (Washington Post) went on to record the worst voting percentage and lowest fundraising tally in the history of the GOP in the district and have now rejected pro life and charter schools to back a Democrat for school board. And they cheered when Charlie Keller led a standing ovation for the suggestion that I join the Democrats.

A person who touts himself in stolen valor as a conservative leader who says he took it on the DL when they were really against him is a joke, and not a funny one.

And, per Jimmy Kimmel, I know my comedy, even if divine.

Perhaps I should have taken your advice, Robert, to “take it on the DL like we did when they were *really* against us.”

Examining the allegations of threats under the standard used in court for dismissal of a case under the Federal Rules of Civil Procedure, we must accept, as true, the charges, and way on the case on the merits of the case you brought. You and Robert Kenyon have claimed that I AM a “fake CI Ranger,” and “admin clerk,” and a REMF, authorizing Jonn Lilyea to post a libelous blog regarding the same, and Charlie Keller, Chief of Staff to Bob Goodlatte, posted on my Facebook page, as a visitor, during business hours, his claim, speaking on behalf of “everyone in VA8” that no one believes anything that I say. But, suddenly you and Matt Wavro, “Chairman Emeritus, title used for information purposes only,” found a clear and present danger of such magnitude to send an email to all convention delegates to warn them and have them contact the leadership to have them deny my entry? As Jake Blakeky asked for an “easy question,” “What is it? Yes or no?” To think, Jessica Talbert asked me “what have you ever done for your fellow Republicans.” Just clean the swamp.

Kissing your own elbow is impossible.

Winning the 8th as a Republican is not impossible, it’s just really, really improbable.

Good luck to you both.