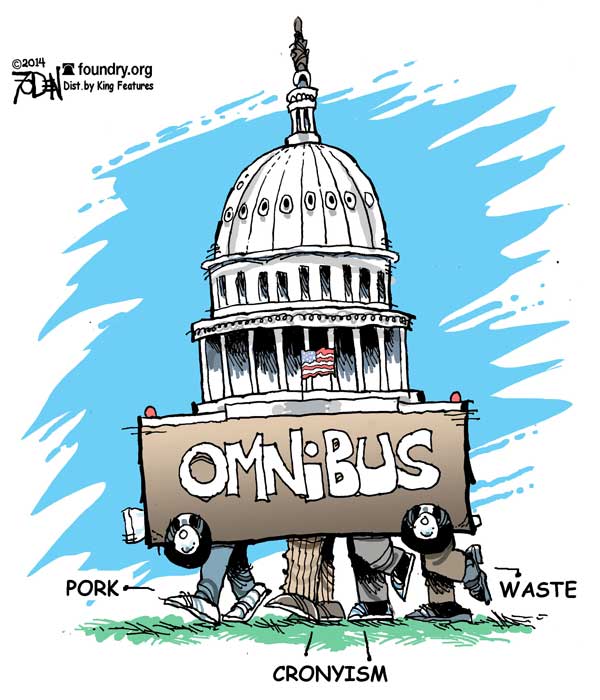 Only two Virginia Republican Congressmen voted for terrible Omnibus bill, Scott Rigell, and Barbara Comstock, both of whom have endorsed Marco Rubio for President. Conclude what you will. Â We have previously written how bad the Omnibus Bill is, here and here.Â

As he often does, Senator Marco Rubio failed to show up to vote on the massive, Â 2,000 page, Omnibus bill. Â Senators Rand Paul and Ted Cruz voted against the bill. Â The full House vote can be found here,Â and the full Senate vote is here.Â

(Is it just me, or does it seem the 10th district Congresswoman is often not on the side of conservatives when she votes? Â What’s up with that?)

If it is Alinsky to call out an ass with no class, then I’ll dedicate my next book to the devil as well.

You are incorrect as to the word, technically, she is acting as to the very form of the word!

On one hand, you are not the keeper and arbiter of the creed on the other hand, the case could be made that she is adhering to the creed according to her principles.

Any ‘grassroots’ thinking she was anything other than an establishment toady RINO musta been SMOKING the roots.

So so anxious to charge within the party eh? We certainly have no shortage of dumbasses to bloody themselves and whoever else they can convince to join them in the compound.

Let me give you a real world analogy. Know what happens to people who take antibiotics every time they get the sniffles?

Barbara took a look at the numbers, the landscape, the players and said ‘Yeah, I’ll risk it’ — what does this tell you? That her opponents would bitch, moan, carp, kvetch, and certain disaffected weirdoes would shake their fist at the sky and speak in dead languages trying to sound like in a Mel Gibson movie.

They are now the worst two congressional leaders in Virginia. What a huge disappointment for conservatives .

Semantics, decorum, and grammar aside, Comstock needs to be primaried. She is working on being the next Eric Cantor.

No, she needs to be ‘repealed and replaced.’ But ‘nuke it from orbit, it’s the only way’ solutions are just plain silly. And labeling and demonizing Cantor doesn’t help.

Mr. Erickson is getting flak for his choice of words – NOT for his message ( nice Akinsky tactics BTW, Rocinante & Donna W.). Please allow me to put it more P.C. for your tender sensibilites:

Barbara Comstock is a DISGRACE to the word, “Republican”! She violates the Republican Creed as a matter of course. Furthermore she’s a disgrace to all the grassroots who worked their hearts and souls out believing her DUPLICITY that she was a CONSERVATIVE! She’s most unfortunately NOT: Comstock is a RINO! An Establishment toady, if you will. She deserves to be PRIMARIED out!

Your wrong. You obvious don’t understand what Alinsky type tactics really mean. It is Jonathan using those tactics. Carry on with your use of capitalization of words.

Here is the link to Ms Comsock’s statement to educate yourself.

You might learn proper grammar before you lecture others about educating themselves. You are=you’re, not your which is possessive, such as ‘your book’,or ‘your daughter’ or ‘your car’.

Ms Martin a typical retort when you can’t defend the indefensible. You are sounding like Bill Clinton now.. You don’t need to lecture me on grammar.

I hope you will spell check every comment on your blog to include but not limited to Connie’s spelling of Alinksy which you managed to miss.

Now stop responding using the same tactics the Dems use when they want to deflect attention from the real issue at hand.

How was my grammar professor?

It’s as obnoxious as you always are.

I never mentioned spelling. Your word usage, not your spelling, was incorrect. Grammar and spelling are two different things. Perhaps English is your second language? It’s a very difficult, confusing, language to learn.

You obviously don’t know me and that is quite alright because I don’t care to know someone who is passive-aggressive like you.

You are way off the course of the original discussion and should follow the lead of some of your male commentators whose behavior is far more respectable than yours. Your are sounding more and more like Debbie Wasserman Schultz.

Seriously, we got enough trouble in the world and 10th to fix on TBE before we get into the grammar war.

Let’s everybody try to be more like me and save the savagery for political debate and chomping on Barbara.

Picky, picky, picky — it’s hard enough to post while driving and now you want us to proof??

Disqus ain’t that friendly to begin with and factor in the autocorrecting from my demon-possessed devices and it’s a wonder I’m as popular with my detractors as I am!

Also, I beat the crap out of English and twist vernacular and slanguage all over the place — and I throw in some non-English phrases and sayings as well.

So sorry in advance, I’ll try, but I do have to tone down my awesome intellect just to communicate with some of these people.

Democratic Sen. Chuck Schumer told reporters shortly after the $1.1 trillion omnibus bill was passed with Rep. Comstock being only one of two VA Republicans voting “Yea”.

â€œAlmost anything, the Republican leadership in the Senate achieved this year, they achieved on Democratic termsâ€¦ Democrats had an amazingly good year,â€ he declared.

If you want to spin that away with a five paragraph Comstock press release you have every right ot do so, but word of advice, I believe you are going to need a little more then this “I’m a tax and spend Republican and proud of it” statement to convince anyone but the lowest or low information voters or her Democratic support.

I never said I was a tax and spend Republican.

Find someone who can actually beat Comstock in a primary. Let me know who you come up with.

Referring to her press release that you linked not you personally, I don’t know you or your stated positions.

I have not found a single Republican who thinks this vote was acceptable — she really blew it with this one! Party old timers are ticked — I don’t know how she dances out of this one.

You are right. Even Comstock’s most ardent supporters are upset with this vote. “Betrayed” is a word I hear often. Does she think having been give a primary makes her exempt from being held accountable for her votes? Does she believe she now invincible? She isn’t. Her supporters are hurt and angry.

A real Democrat not a Democrat lite like that slimy Comstock can beat her And what would it matter if they did? What is it worth having a useless GOPe politician like her there anyway? Oh they’ll vote for a budget that gives Obama a total victory? Well that is what Comstock’s vote was for.

And that is the question — is any Republican better than a democrat?

Is she the ally without or the enemy within?

Is it worth her to maintain the majority?

Is her voting record on behalf of her constituents so repulsive to us that we are considering a proper response?

That presser was normal spin crap from GOP leadership — that vote was totally unacceptable to the district and especially to Republicans in the district. I hope it was worth it for her, because it wasn’t for me.

Wow! Jonathan do you feel better now that you reached a new low in your attacks on Barbara Comstock? What’s up with the nasty names?

She is not a conservative and does not represent republicans. A turncoat democrat sucker is what this skank is. That is the pc-est way I can speak of this piece of crap congressperson.

See that’s the problem, you hold back too much.. Let it out.

Seriously though, the vernacular is unbecoming. You are certainly entitled to your opinion but the coarse gutterspeak makes you less credible and is beneath you. She is still our elected Congressman and a Lady — we have more class than that.