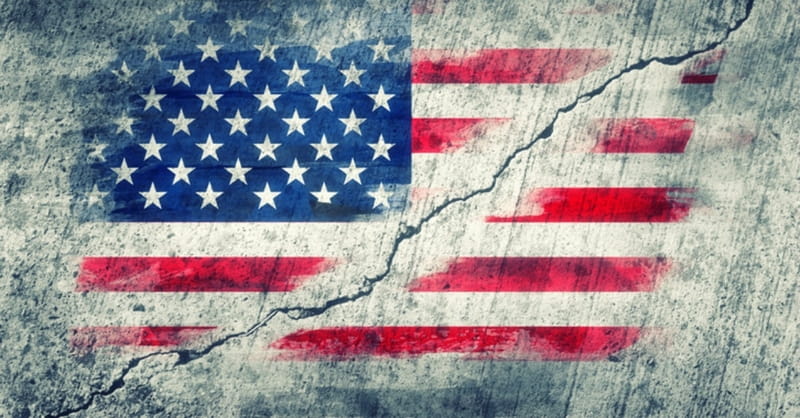 We Have Deep, Potentially Unhealable, Fractures In Our Body Politic

We live in contentious times!

Arthur C. Brooks (American Enterprise Institute), writing for the New York Times, highlights data showing that “political polarization in the US is worse than at any time since the Civil War.”

He goes on to explain that “the problem is not incivility or intolerance, but contempt” and cites a National Academy of Sciences (NAS) study reporting that the divide between Republicans and Democrats today is comparable with that of Palestinians and Israelis.

Each side believes that it is driven by benevolence, while the other side is evil and motivated by hatred.

We are on the verge of civil war according to many pundits. The general collegiality (“go-along-to-get-along”) that formerly reigned in politics has disappeared.

The recent midterm elections produced a very radically divided Congress emblematic of a totally divisive America that is rapidly drifting further and further apart towards a more vitriolic poisonous body politic. The media appears to revel in the divisiveness.

So, we have two broken sides with wildly different opinions and dogmatic philosophies heading farther and farther apart — certain to double down on poisonous and divisive treacherous gridlock, or more, heading into 2020.

The NAS study calls this phenomenon “motive attribution asymmetry.” It leads those on each side to view the other as an enemy with whom they cannot negotiate or compromise.

Why is this important and why should this seriously concern everyone? Because if so many of us are this convinced that the other side isn’t just wrong, but dumb and evil, then we’ll never be able to find enough common ground to solve real problems. Worse, we’re going to elect a gaggle of loudly honking leaders who cannot solve anything.

Is this not where we are today?

We all recognize significantly substantive differences between incidental variances of opinion, insults, defamation, and the real damages from violence by ‘social justice warriors’.

Radical activists and political figures have discarded any semblance of the ‘old manners’, and are engaged in “anything goes all-out war”. Discord and violence are actually celebrated; recall the recent Supreme Court nominee hearings, et al.

IMHO, the propensity for violence is mostly one-sided [see media video clips of violent acts committed by mask-wearing demonstrators at conventions, town halls, and other large gatherings, or attacking people in restaurants and public spaces.

“This is a dangerous game; people are going to die … it’s just a matter of time,” says J.J. McNabb, an expert on political extremism at George Washington University.

I don’t see any groups of conservatives committing such violent acts.

These troubling effects of our increasingly polarized social fabric and current political discourse include:

These are some of the causes and effects of polarization. In this article, however, this area is too complex to attempt to ferret out, and comment upon, the root causes. Suffice it to acknowledge that it exists and is becoming exacerbated to the point of metastasizing.

Some pundits predict that if this all continues on this downward spiral, we might go beyond the point whereby we will be unable, as a body politic, to find our way back — and this historically unique national republic that we once enjoyed is totally destroyed.

How did we get here?

We have a current focus on ‘feelings’ in our culture today — publicized actions indicate feelings are now so important that they are considered almost sacrosanct. Witness the creation of “safe spaces” on campuses; the overt strict limiting of ‘free speech’; the push for raising of ‘consciousness’ about the importance of ‘gender preferences’ and ‘transgenderism’; the celebrated unchallenged assertions by a young person recently elected to Congress that “feelings trump logic and facts”; et al.

How ironic this is for me to observe. I vividly remember the long ago day I was standing about 10 feet away witnessing Mario Savio (Initiator of the “Free Speech Movement” which later spread to college campuses nation-wide), also standing on the same steps of the UC Berkeley Student Union, the side facing Telegraph Avenue, vociferously shouting to a large peaceful crowd as he was ‘demonstrating’ for “free speech” — and then recently seeing on news broadcast videos, of the exact same spot on the UC Berkeley campus where I had stood, the violent riots in protest against a scheduled ‘conservative’ person’s speaking engagement.

This shows how the ‘Progressive’ left has truly turned 180 degrees around. What used to be so correctly morally right for them (free expression of ideas) has now become for them to be so morally and outrageously wrong (any views they oppose)! And what used to be ‘peacefully’ demonstrated is now acted out in out-of-control abject violent acts of hateful aggression.

Dr. Michael Brown says: “I have often observed how church denominations which become liberal inevitably change their views on abortion, homosexuality and Israel. And the more liberal they become, the more militant their pro-abortion, pro-homosexuality and anti-Israel stances become. Will this be the fate of the Democrat Party? It’s already more than two-thirds there.”

Accordingly, we note a March 6, 2019 headline on Gallup.com, “Americans, but Not Liberal Democrats, Mostly Pro-Israel.”… so then, is it a coincidence that Republicans are more strongly pro-life, pro-family, and pro-Israel, than Democrats? Are these three issues somehow related? I think the answer is “yes”. Does the sudden Democrat shift towards the radical left signal the end of (or, at least, the great diminishing of) their support for Israel? Again, “yes”.

Abraham Lincoln, quoting Mark 3:25, said: “A house divided against itself, cannot stand. I believe this government cannot endure” [from a speech in June 16, 1858 before he became President].

What can we do now?

So, we need to commit never to treat others with contempt, (even if in our hearts we believe they deserve it) but instead to “respond with warm-heartedness and good humor.” He reminds us that “No one has ever been hated into agreement, after all.”

While agreeing with Mr. Brooks about changing our attitude and response, I would add that moving beyond contempt and political vitriol does not mean that we must compromise on essential truths. For Christians, that means not compromising on the absolute truths in Scripture.

Thus, the egregious ‘pro-choice’ position which supports laws that permit the gruesome death of unborn children is non-negotiable. For me, I agree with Planned Parenthood, the medical community, the courts, atheists, and religionists alike, that life begins at conception — that recent publicly published assertion is now undisputed — and therefore, abortion is outrageously morally wrong.

Also, God’s intention is for marriage to be a lifelong covenant between one man and one woman. I acknowledge that ‘same-sex marriage’ advocates would vehemently contend that my position on biblical marriage violates the civil rights of LGBTQ people just as reprehensibly as those who had opposed civil rights for African Americans in the 1960s; but I disagree.

Wanton rioting, violence and destruction of property are acts of civil disobedience that must not only be stopped, but punished appropriately and publicly.

Controlling our national sovereignty and stopping the flood of illegal immigrants is essential.

The media’s fomenting of divisions must be curtailed. Actions are needed to strip away those specific legal protections specially afforded to the press which currently enable them to proactively advocate one-sided reporting and ‘fake news’ without consequence.

Those are my beliefs and I stand by them.

However, I will commit to civility and listening carefully while respecting the rights of others to hold contrary positions.

I am reminded of the Scriptural admonition to “Let no corrupting talk come out of your mouths, but only such as is good for building up, as fits the occasion, that it may give grace to those who hear” [see: Ephesians 4:29]. “Strive for peace with everyone …” [see: Hebrews 12:14].

My appeal is to everyone on all sides of the social and political spectrum.

During this Lenten season, let’s ask God to strengthen our relationships with those with whom we disagree; to pray for the courage and character to speak the truth in love; and to model the changes we want to see in our culture.

I say that this Nation, established under God, truly has room for all of us together — E pluribus unum and Annuit cœptis.