This isn’t about not wanting to count votes that should be counted. It’s not about seeking partisan advantage. To the contrary, it’s about fairness and equal protection of all Virginians under the law.

What happened in Fairfax over the last week, culminating in tonight’s announcement of a reversal in fortunes of the Virginia Attorney General candidates, was a travesty. I serve as Vice Chairman of the Stafford County Electoral Board, and can say from first hand knowledge that the Fairfax Board has departed significantly from the procedures followed by almost all other jurisdictions in Virginia in two important ways. First, provisional voters in Fairfax had more than twice the time as other Virginia voters to organize themselves and make their arguments that their ballots should be counted. Second, over the course of most of the last week, lawyers and advisors for both the Democrat and Republican parties were able to identify and coach “their” respective voters on how best to spin their facts and present their arguments to the board. No other provisional voters in the state had access to those resources.

Not only does this unprecedented and entirely unnecessary departure from the rules constitute tremendous unfairness to other voters around the Commonwealth, it turned what should have been a low-key, objective examination of the facts in accordance with published rules into the opposite: a politically charged zoo that undermines the electorate’s confidence in the uniformity and fairness of the electoral process. I’m sure the members of the FCEB felt they were doing the right thing by their voters, but in doing so they raised a giant middle finger to the rest of us.

On election day, each precinct keeps a log of the provisional ballots cast in that precinct. Among other things, the log reflects the name, address, social security number, and phone number of the provisional voter. The log also has a coded number to reflect the reason the voter is casting a provisional ballot. According to the Virginia Code and clear guidance from the State Board of Elections (“SBE”) to all electoral boards around the state, this log is NOT TO BE SHARED WITH THE PUBLIC OR THE POLITICAL PARTIES. Rather, it is to be made available for inspection by representatives of the political parties only during the electoral board’s meeting to decide on which provisional ballots to accept from each precinct. The SBE guidance, Provisional Ballot Meeting Memo_2013 (Final), reads in relevant part as follows:

During the provisional ballot meeting, authorized representatives are permitted to see and hear the process, to inspect the provisional ballot log and take notes from the list, including the names, phone numbers, date of birth, and addresses of individuals who have voted provisionally. While authorized representatives may take notes from the log, they should not be permitted to leave the meeting with any photocopy. The access rights are limited to inspection and note-taking.

This procedure allows the party observers to understand why each ballot was accepted or rejected, and to record (in real time) the relevant information for those voters whose ballots were rejected in the event a party wishes to challenge that decision in court. What IT DOES NOT DO is allow the parties time to identify their potential supporters among provisional voters in advance of the provisional ballot meeting, get those voters to the Board meeting to plead their cases, and have the party lawyers coach them on the best possible way to spin their circumstances to get the electoral board to accept their votes.

For that, we have to look to Fairfax County, where the FCEB decided to provide the information on the provisional ballot logs to the parties well in advance of the board’s consideration of the provisional ballots. Not only that, but rather than limiting the parties’ “access rights [] to inspection and note-taking,” according to FCEB Secretary Brian Schoeneman the board helpfully provided the parties with the relevant information on a single consolidated spreadsheet “as an administrative convenience.” The FCEB apparently justifies this by relying on a remarkably tendentious reading of SBE’s policy. Schoeneman has taken great pains to clarify that they DID NOT provide the provisional logs or copies of the logs (“To be clear, again, we do NOT provide copies of the provisional ballot log”), which would have been prohibited by SBE’s guidance. Instead, they simply extracted all the relevant information from the logs and provided it to the parties in a more usable, convenient electronic form (i.e., technically not a “photocopy”). 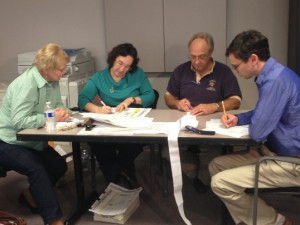 Schoeneman says that other large jurisdictions do this as well, and suggests that perhaps this has been done before in Fairfax. I cannot speak to this, but I can say that most jurisdictions choose to follow the rules and guidance from SBE, as this is the only way to ensure that voters across the state are provided equal protection under the law. FCEB’s departure from these rules means that a substantial portion of the electorate are subjected to a different (and more favorable) treatment than the rest.

With all due respect to the Fairfax board members, this “administrative convenience” is precisely what the procedures followed by most of the rest of the state are designed to thwart. The political parties are not supposed to be in advocacy mode, injecting their partisan interest into what should be an almost completely objective determination of the merits of each ballot. Which leads us to the second major departure from standard practice.

The blanket extension of time for provisional ballot consideration

Read that again: “[T]he meeting shall stand adjourned from day to day, not to exceed seven calendar days from the date of the election.” On Saturday the FCEB announced that it was extending the period for considering provisional ballots to Tuesday (today) at 1:00 PM. It is quite obvious that this departs from the Code in two important ways: first, a single day extension is to be granted to individual voters (presumably because of individual circumstances), not ALL provisional voters. Second, if the board is unable to complete its review of all voters by the end of one day, they may adjourn to the next day, but there is no authority to say in advance of a particular day’s meeting that the meeting will need to be adjourned for subsequent days.

Undoubtedly because of squawking by the political parties about insufficient time to find and coach their voters, and the fact that relatively few voters had shown up during the standard period (just like in every other jurisdiction), the Fairfax Board decided their voters were special, and not subject to the same rules and limits as everyone else. So, the Board voted to extend all Fairfax provisional voters’ time to appear before the Board by 3 days. And this is after they had already extended the period a day longer than almost every other jurisdiction, the vast majority of which completed their provisional canvasses last Friday.

I confess that I’m not privy to all the facts and circumstances giving rise to the Fairfax Board’s actions. My impression from afar is that they took these actions over the private objections of the State Board, and some of the actions over the very public objections of the Republican Party. Nor am I familiar with the precise procedures in other large jurisdictions, or what has been done previously in Fairfax. But, that’s essentially irrelevant.

What I CAN speak to is what most other electoral boards did. In Stafford, we too were harangued by the political parties to provide the lists of provisional voters in advance of the provisional ballot meeting. But, like most other jurisdictions, we followed SBE procedures to provide a uniform application of the election laws across all of the Commonwealth’s localities. We also saw the value of SBE’s procedures, as the idea of having the media and partisan circus swirling around our process is inimical to the spirit of non-partisan fairness that my colleagues and I pride ourselves on.

Had we fully grasped the impending disregard of the rules in Fairfax, I’m quite confident my colleagues and I would have likewise availed ourselves of the opportunity to give our voters a much better chance of getting their votes counted. But now, like most voters around the state, the voters in my county have been subjected to the unfairness of Fairfax.