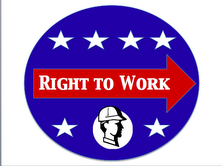 One of the best actions to come out of Virginia’s 2015 Legislative Session was the passage of Del. Rob Bell’s resolution to incorporate Virginia’s Right-to-Work laws into our Virginia Constitution. [read_more]

It was pretty close to being a party line vote; Republicans voting solidly in favor and Democrats opposing. Before becoming law, the resolution will need to pass both houses in 2016 and then pass a voter referendum in 2017.

Responding to the question posed in the title of local attorney and opinion writer John Flannery’s column, “The Other Side: When is a Wage Rate a Moral Offense?”, I offer this answer:  “A wage rate, otherwise referred to as a minimum wage or wage floor, is not a moral offense as long as it’s based on an agreement between a worker and his or her employer – not arbitrarily dictated by the government.”

In the same column, Flannery ignores the overwhelmingly positive effects Right-to-Work (RTW) laws have on people and the economy overall. Right-to-Work means no person can be forced, as a condition of employment, to join a labor union or pay dues. RTW laws in Virginia do allow people to pay union dues, but leaves that choice where it should be – with the workers. If unions cannot thrive based on the merit of the service they provide, that speaks for itself.

Here are a few points on minimum wage that should interest the public. In a 2014 report, the Congressional Budget Office shows clear evidence that an increase in the minimum wage does more harm to the low-income individuals it is attempting to help. A government-imposed wage floor lowers employment levels for low-skilled workers by 1 to 3 percent. When the cost of low-skilled workers goes up, the demand goes down.

The CBO report revealed what the majority of economists already knew; a wage rate increase kills jobs. Economist Thomas Sowell sums it up well, “The net economic effect of minimum wage laws is to make less skilled, less experienced or otherwise less desired workers more expensive — thereby pricing many of them out of jobs.”

Forbes magazine had this to say – Virginia Tops 2013 List of the Best States for Business, “Virginia ranks first among the states in the regulatory category because of its business-friendly government policies and strong incentive offerings.  Our study looks at six important factors for businesses: Costs, labor supply, regulatory environment, current economic climate, growth prospects and quality of life. Virginia, a Right-to-Work state, is the only state to rank in the top five in four areas—only missing on costs and growth prospects.”

Mr. Flannery seems to believe that legislators should attempt to expand their reach into the affairs of businesses and individuals through increased regulation and compulsory union membership; a mistake which most certainly will stifle growth. Increased government control with its expanding bureaucracy over key sectors of our economy, such as the health care system through Obamacare, will always result in reduced efficiency and higher costs.

In Chief Executive Magazine’s eighth annual survey of best and worst states in which to do business, California earned the dubious honor of being ranked dead last for the eighth consecutive year. The article tells us, “California’s economy, which used to outperform the rest of the country, now substantially underperforms; its unemployment rate, at 10.9 percent, is higher than every other state except Nevada and Rhode Island. With 12 percent of America’s population, California has one-third of the nation’s welfare recipients. Each year, the evidence that businesses are leaving California or avoid locating there because of the high cost of doing business due to excessive state taxes and stringent regulations, grows. According to Spectrum Location Solutions, 254 California companies moved some or all of their work and jobs out of state in 2011, an increase of 26 percent over the previous year and five times as many as in 2009.” California serves as a cautionary tale to the rest of the nation about what happens when our government interferes repeatedly and unnecessarily between businesses, employers, and consumers.

Dictating the terms of employment and union arrangements to workers and businesses, as Mr. Flannery proposes, is counter to the fundamental American ideals of equality of opportunity, and will weaken the economy and pose a threat to the free enterprise system.

The truth is that the private sector, not government, creates the opportunities our citizens need to prosper. I hope the Virginia General Assembly will pass the RTW resolution again in the 2016 Session and pass it on to voters. We can unleash the power of the free enterprise system by strengthening Virginia’s Right-to-Work laws and allowing the private sector to create high-quality and better-paying jobs.

The amazing prosperity and economic growth America has experienced over the last 200 years flows from the free enterprise system. Nurturing the power of that system with strong Right-to-Work laws is the path to a bright economic future for Virginia.

This is a good story , yet I have an issue with the 10th paragraph . An opportunity to succeed ? Well that is not exactly true the opportunity is met with the ever growing effects of illegal commerce competing with illegal employers illegal contractors in the Asylum State of Virginia.. Another good read to raise an eye to is http://watchdog.org/202012/subcontractors-shadow-economy/

Right to work laws are the rising tide in the US with 24 states now having enacted legislation, I don’t see this trend shifting in the foreseeable future and certainly not in Virginia, still a constitutional amendment is a worthwhile effort