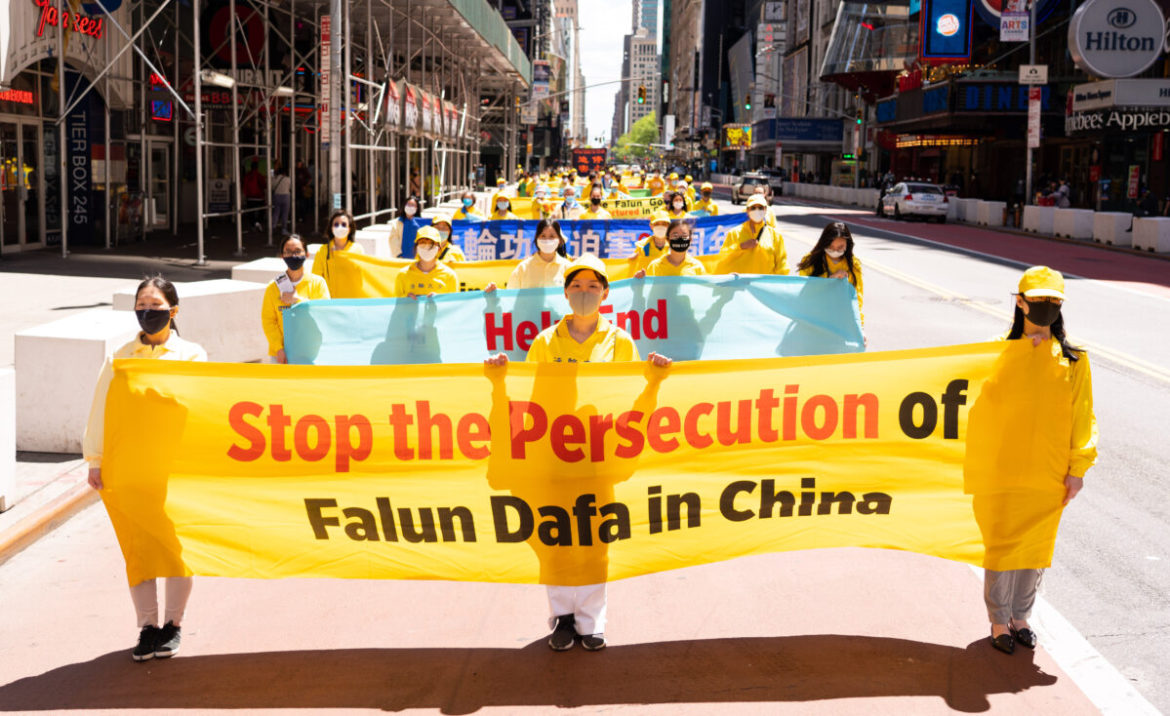 Practitioners of the spiritual discipline Falun Gong hold a parade in New York to celebrate World Falun Dafa Day and to protest the ongoing persecution of the spiritual practice by the Chinese Communist Party in China, on May 13, 2021. (Larry Dai/The Epoch Times)

The movie â€œUnsilencedâ€ is showing through next week at the Cinemark Theater in Fairfax.  Make a plan to see it.

Based on true events, â€œUnsilencedâ€ takes you alongside four Chinese university students on a perilous journey as they run headlong into government oppression for their personal beliefs.  As the film unfolds, some of the circumstances are hauntingly like what is happening today in the United States.

Falun Gong grew out of the qigong movement in China in the 1980â€™s and â€˜90â€™s, which emphasized health, traditional medicine, martial arts, and renewed interest in traditional philosophy.  At one time sanctioned by the Communist Chinese government, Falun Gong became increasingly popular.  By 1999, the government estimated that Falun Gong followers numbered 70 million. But its spiritual teachings and independence increasingly were seen as threats to the Communist Party.

In April 1999, over 10,000 Falun Gong practitioners gathered outside the central government compound in Beijing, seeking legal recognition and freedom from state interference.  The four young university students helped organize the crowd.  When the students were invited into government offices to explain the purpose of the gathering, they naively thought the Chinese Communist government would support their pleas for recognition. But shortly after the students exposed themselves as organizers, the brutal crackdown ensued.

The government swiftly began a propaganda campaign against Falun Gong, smearing its reputation and portraying followers as enemies of the state.  Government monitoring of cell phone conversations and social media was pervasive. The organizers were hunted down like prey, thrown in prison and tortured.

Thanks to a fearless American journalist, the plight of the students and fellow adherents to Falun Gong was exposed.

Iâ€™ll leave it there for you to see the film for yourself.  Be warned that there are a few graphic scenes from prison when the students are tortured.  Our comfortable existence cannot deny what happens in jail cells.

â€œUnsilencedâ€ has been very well attended and will show for another week at the Cinemark Theater in Fairfax.  As you watch it, think about similarities to what is happening today in our country.

[…] â€œUnsilencedâ€ film is a moving dramatization of Chinaâ€™s brutal crackdown on a religious minority, ordered from the top https://thebullelephant.com/unsilenced-movie/ […]

Well this is interesting â€¦. The daily, multiple show times suddenly have been reduced to one time only â€” 9:30 PM. This deserves further scrutiny. Might the Olympic Games have something to do with this?

” As you watch it, think about similarities to what is happening today in our country. ” What the hell are talking about? That is obnoxious

When you do not understand tyranny, you get more of it. This is a good example of how totalitarian communism works but there are many others throughout history. Even Canada today is witnessing the tyranny of government oppression.

“Even Canada today is witnessing the tyranny of government oppression.” Hadn’t heard that………..