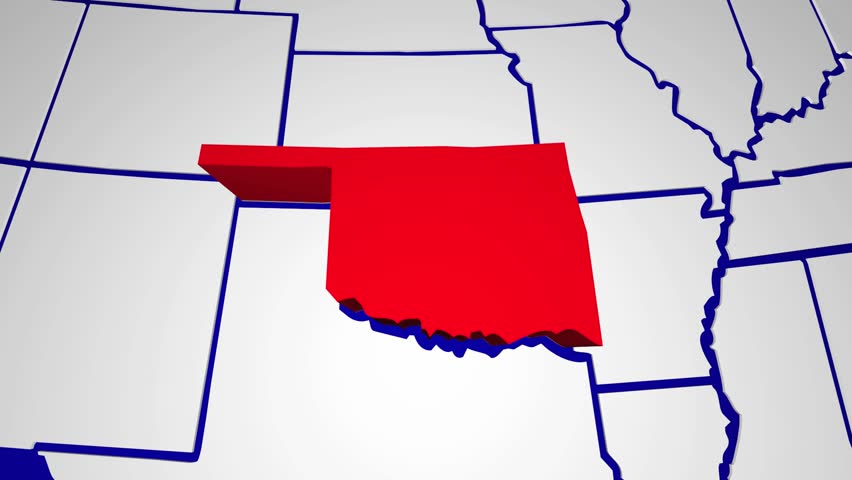 UVA Center for Politics Predicts a Landslide for Clinton

On Thursday the University of Virginia Center for Politics issued their predictions for the coming election showing a landslide election for Clinton. Â From BusinessInsider.com:Â

Larry Sabato, the director of the UVA Center for Politics, described what he said made the map different from most polls, which reflect the more fickle tendencies of the electorate. The UVA electoral map focused on “the electoral fundamentals and fixed elements of politics that predetermine most votes, especially partisanship, demographics, and strong forces shaping the political landscape.” 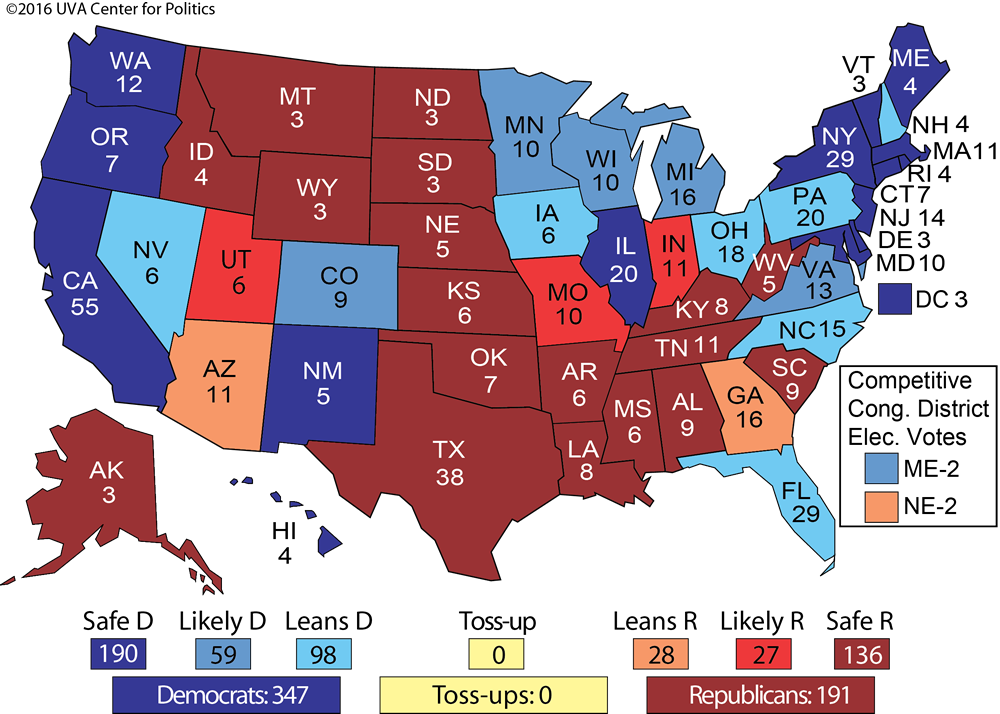 In case you missed it, Hillary is so confident of winning Virginia, she has pulled all of her ad buys from the state. Â Story here. Â Sad to see Virginia become a reliably blue state, President, Governor, and both Senators.

This race has consistently stood the pollsters on their ears.

This scenario only happens if we don’t energize and engage voters to go to the polls.

Wanna get a good barometer on who’s going to win the election? Here’s a challenge. If you go to Hillary Clinton page and you go to Donald J. Trump page it will tell you how many of your friends like each. I have 127 for Donald and 10 for Hillary. I’d bet nobody has more Hillary friends than Donald friends but I’m curious. It’s not scientific and will only provide intel on your politically motivated FB friends, but still, it’s an interesting snapshot:

When you see the polls showing Hillary ahead yet Trump events are 100% sold out with thousands standing outside while Hillary cant fill a high school auditorium, you have wonder why?

You know things are bad when Georgia is ‘iffy’ for Republicans.

Funny, this article says Trump will win in a landslide. Many more out there like it. It seems Virginians, at least at this site believe everything the media puts out to be true. Guess we will find out in November which one gets the landslide.
https://the-politik.com/2016/08/04/trump_will_win_landslide/

If you don’t want Va to be blue then get up off your ass and do something about it, and quit your whining. Jeez, I have never heard such pathetic whining in all my life, not even from a two year old. “Oh well, I didn’t get my way so I will stay home because I have principles, values, ….or something. But golly ghee we ended up w/Clinton and a blue state. Poor pitiful me.”

When will you understand that it has NOTHING to do with our guy not being in the race, and no one is looking to feel sorry for themselves. If Trump can’t do his his job, and bring out Republican voters, that’s on him.

Perhaps when you quit whining and bellyaching. It has everything to do w/being a sore loser, otherwise you would be have changed your own attitude. Others get it, they are willing to hold their nose, but you seem to think you are above that. Millions have voted in the past for the GOP candidate and not because the candidate brought out the voter, it was out of necessity.

You flit around like you are MIss GOP, but yet you seem to enjoy feeding the enemy. Why don’t you quit w/your negative crap and negative stories? Everyone sees right through it. You want to report the truth fine, but the spin is not acceptable if you want to be considered as a trusted and worthy news site. If you want to be like the corrupt MSM by all means continue to do so, but I will ridicule you each and every time because it is lame.

I get people don’t like Trump, his style, and all the rest, but it is our country at stake. What don’t you understand about that? I do not know if you are naive, just stupid, or enjoy being in your pity pot, but it is funny how you blame your poor attitude on everyone but yourself, it is either because someone is being mean to you, or no one is begging you to get w/the program, or Trump isn’t doing his job, never because you act like a spoiled brat that didn’t get their way.

Just what way did I not get?

What did I not get that I wanted? I am reporting the news, polls are included. You are just going to have get over it. Your guy is stinkin’ up the place, you can find a way to cope with that, or continue your whining and bellyaching.

I think the point is that he is OUR guy, and once we admit that then we can stop bellyaching and get on with defeating the traitor in a pant suit.

I would have agreed with that in every Presidential year prior to this one. McCain was not my choice but I got behind him, delivered signs to my friends and neighbors and worked the phone banks hour after hour. Same thing in 2012, Romney wasn’t my first choice but I did everything I could to help elect him. This time is different for so many conservatives. I’m still waiting for Trump to give me a reason to support him, something other than Hillary is worse.

The fact that “Hillary is worse” is definitely a good enough reason to vote for Trump. Why is it so terribly important to have “a good reason” to vote for the Republican nominee when the opposition is Hillary Clinton?

The lesser of two evils is still evil.

So vote for the lesser two evils.

It is my belief that the return of manufacturing and associated construction is essential to our national wellbeing. Trump is committed to business tax cuts and badly needed regulatory reform. Hillary is talking about tax increases and no regulatory reform. If she is given multiple years of power, then China and India will surpass us and we will become like Europe.

If the Beast declaring that she will open the flood gates w/in the first hundred days w/illegals, and Syrian refugees that are ISIS isn’t enough for you then you are dumber than I thought. When the illegals rape you, slaughter your family, and take everything you own don’t whine to any of us because Trump didn’t give you reason to vote for him. God, you are pathetic.

Are you aware of the little disabled girl in Idaho? How the media and politicians are doing everything in their power to keep that story quiet? Go watch the video of the town hall meeting, you are just like the mayor.

Just more narcissist behavior, it is all about me, me, me. Miss Jeanine needs Trump to personally cater to her, because it is about her, not our country, not American lives, jobs, dollars.

If this is going to be the attitude going forward, then I will have to become an independent. You are either loyal or not.

I saw just how poor McCain was when I manned the local hq. The phones and walk ins were dead until Palin got the nod – and then McCain blew it. Romney never had a chance and I knew it before he got the nomination. Nevertheless, I walked and talked and wrote to get them elected. A lot of effort for nothing.

Now we have a real chance – and supposedly loyal Republicans are taking a hike? Sure, Trump wasn’t my first choice but he has a better chance at becoming president than McCain or Romney.

That is the problem w/this hack, she doesn’t want Clinton to lose, and she plays the naive, little ol me, just posting the news crap. It is clear what agenda she is pushing, and she and her ilk are exactly why the GOP is despised, and whether Trump wins or loses the GOP is dead. We will be forming a new party with or without them.

“Your guy” Very telling statement – he’s the party nominee and as I have supported one doltish Republican presidential candidate after another it’s time for the so called establishment to support Donald Trump. Our soldiers are ready to give their lives for our country and the establishment crybabies (who pompously and mistakenly claim the conservative mantel) won’t give a vote to prevent an all out socialistic attack on our country?! I’ve had it with these idiots!

You are not alone x millions.

Speaking of stinking. You skew what you report because you are unhappy w/Trump, that is a fact. There is plenty of positive news, like there IS video of the cash to Iran to release the hostages, like Khan is crooked as the day is long, yet you continually to choose to find negative where Trump is concerned so you can push your agenda, and push for Clinton, just like all the other media whores that push Clinton. And then you whine, “Oh, Va will remain blue”. It is disgusting. You want it to be blue.

It has been proven time and time again the polls have been skewered towards the Beast, and the media bias is stunning even for them. Trump scares the daylights out of everyone, and for good reason. Time to end the corruption.

Give it a week:

Everybody has been predicting this since before the primaries, to see it happening is no surprise.

The GOP downfall is the cities. You can win RoVa all you want, but if you can’t break the cities it’s all over. Beat on those urban doors instead of taking a drive through the country.

They said that he would be beaten badly for the nomination about a year ago too, didn’t they? I’ve had more people (voters, mind you) asking for Trump material than we can provide. More power to the Trump camp, if Hillary has pulled her ads. You guys need to get out and talk to folks outside your normal group. You may be very surprised.

No, I am not surprised that Trump has brought in new voters. I just doubt it will be enough.

If these ‘conservative’ voters are willing to vote for Clinton, what makes you believe they are conservative Republicans?

I never said conservatives would vote for Clinton. Among the many I know, they are simply not voting. A few of the younger folk are going with Johnson. In any other year, they vote a straight Republican ticket.

A non vote is a vote for Clinton. The non-voting conservatives are not conservatives at all. How could they sit home knowing what will happen to the Supreme Court?

A year ago they published a pretty nuanced piece that named their 5 most likely and ranked him number 6 of 15. They also devoted considerable space to their rationale and how Trump might break old patterns.
http://www.centerforpolitics.org/crystalball/articles/republicans-2016-what-to-do-with-the-donald/

Do we know how accurate this Center has been in predicting past Presidential Elections?

Their summary of accuracy in predictions on their Web page is impressive
http://www.centerforpolitics.org/crystalball/about/

Then the game plan is to tell every liberal we know that Hillary has it in the bag and they needn’t trouble themselves by voting.

It won’t be enough.

I wouldn’t say Virginia is a reliably blue state. However when the Republicans run a liberal candidate who has no interest in promoting the Constitution and shrinking the size of government, is it any wonder why voters would reject them?

Jeanine also mentioned that we have a Blue Governor & two Blue Senators. Not all the R candidates are liberals.

Possibly because so many of us have the Blues 🙂