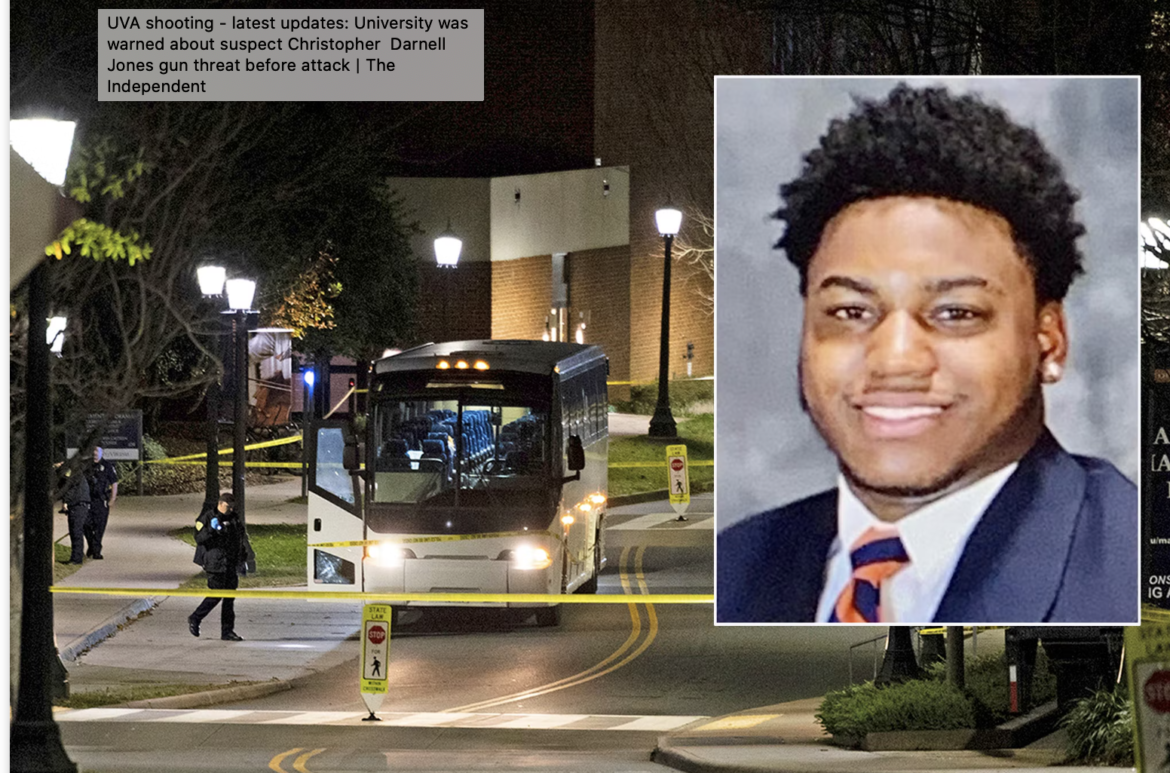 Former UVA football player, Christopher Darnell Jones Jr., has been accused of opening fire on a bus filled with UVA football players, killing 3 and injuring 2 more with one in critical condition. The bus was returning from a field trip to see a play in Washington DC. It was about 10:30 pm last night when shots were heard coming from near the Culbreth parking garage on campus.

The students who were fatally shot:

After a 12-hour manhunt, Christopher Darnell Jones Jr. was arrested and charged with three counts of second-degree murder and three counts of using a handgun to commit a felony. The motive behind the shooting is not yet clear.

Jones grew up in Petersburg and later played football Varina High School and his senior year was spent at Petersburg High School.

Virginia Sports reports Jones was a non-playing member of UVA’s football team in 2018.

He was not currently a member of the team and hadn’t been for “over a year,” according to school officials.

Police say all three people killed in the attack were football players, but no motive has been provided for the slaying.

Jones was also involved in a hazing incident in February 2021, university officials said, but did not provide more details.”

“I am holding the victims, their families, and all members of the University of Virginia community in my heart today, and we will make plans to come together as a community to grieve as soon as the suspect is apprehended,” Ryan said in a statement released just after the shooting.

More details of this horrendous act are here, here and here.

Define Non-playing member of the team , and go from there.

The UVA administration has to share some blame here for allowing violent rhetoric to pervade relationships and make mentally fragile people into murderous monsters. Civility is a lost cause – and it shows up in the social studies grievance industry of far too many colleges and universities.

It would have been much better if he had used a Molotov cocktail? Once again, you are an idiot.

I would take the risk that we won’t have a surge in molotov cocktail attacks if we get our gun epidemic under control.

You’ve got a huge job to confiscate guns Eric… You are going to be putting a lot of black men in jail. Chicago Eric? Look at the photo of the killer. Then once you get the guns already in the US, you are going to have to shut down the guns that will be crossing the border illegally from Mexico with the fentanyl.. I am sure you don’t want to do that. Guns will become another export from Mexico along with the drugs that come over.. Guess you guys are off of defund the police and now you will want to appropriate billions of dollars of gun police.. Along with IRS agents. Can you just combine the two and maybe save a couple of million? This of course being the federal government.. which wastes money as fast as it can..

One of the things anti-gun nuts like you seem to think is that you can prevent murderous people from murdering if you take away one means of murder. People adapt and use lots of other things. In the UK, the machete is now a big problem. Am betting that the same for most of Western Europe. What are you going to do, ban butter knives?

Yeah, sure, machetes can kill 25 kids in 2 minutes. Stop being an idiot

Doc, have you compared the UK murder rate to the US murder rate lately? Ours is 5 times higher… smh…

University of Idaho students were stabbed to death. 3 girls and one boy. No suspects so far.

Daryl Brooks.. you know the Ford Escape that killed the dancing grannies in the parade in Wisconsin.. used a car. ER… To you liberal crap heads, I mean the Escape killed the grannies. Was a hate crime too.. but that doesn’t register with you does it schmuck? The Ford Escape is getting 6 consecutive life sentences…

“Once again, you are an idiot.” Get bent

Machete attacks in Rwanda genocide killed nearly a million people. There have been a number of recent machete attacks by one person that injured/killed dozens in a very short time. Look it up.