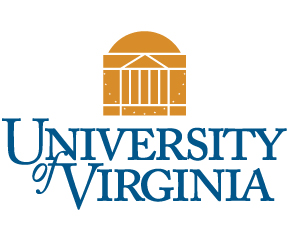 The 2014 Loudoun County Survey of Residents was carried out by the Center for Survey Research (CSR) at the University of Virginia.  The survey was based closely on the last survey in 2012 and covers a vast amount of information, including residential approval rates for both Fire, Rescue and Emergency Management Services as well as the Loudoun County Sheriff’s Office. Download the full report HERE.

Local government focuses on providing certain core services to residents, with one of the most important services being public safety. About 98 percent of respondents said they feel “safe” or “very safe” in their neighborhoods, and 95 percent said overall quality of life in the county is “excellent” or “good.” In addition, 80 percent agreed “strongly” or “somewhat” that the county provides a good value for the tax dollar. 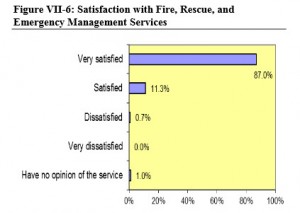 Fire, rescue, and emergency management services have been used by slightly under one quarter of households in the past two years. 87.0 percent of users are “very satisfied” with the services, up from 79.3 percent in 2012, while only 0.7 percent are “dissatisfied.”

African Americans give fire, rescue, and emergency management services relatively lower ratings than do residents in other categories. Residents aged 25 to 34 give relatively more favorable ratings than do residents in other age groups. But even those poorer ratings among other age groups are fairly high on the scale for this highly-rated service. (See P.46) 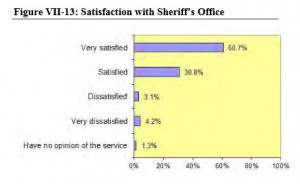 Approximately one-quarter of households have used the services of the Sheriff’s office in the past two years. 60.7 percent of users are “very satisfied,” up from 44.4 percent in 2012, with 30.8 percent being “satisfied.” Only 3.1% are “dissatisfied.”

Among racial groups, the Sheriff’s office receives its highest ratings from African Americans and Whites, though these race differences are not statistically significant. Residents aged 25 to 34 give the Sheriff’s office higher ratings than do residents in other age groups, though once again the differences are not statistically significant. (See P.48)

Overall, residents of Loudoun County continue to give very high marks to the county for its public safety, overall quality of life, value provided for the tax dollar, quality of county services, rural character, and proximity to amenities and jobs. The concerns most frequently expressed by residents relate to traffic and growth.