The Virginia Citizens Defense League PAC today reiterated in no uncertain terms its strong support for the Senate candidacy of Del. Ben Chafin (R-Russell). Chafin’s Democrat opponent, Mike Hymes, has some real issues about campaigning like he favors defending the Second Amendment, but saying an entirely different thing when he doesn’t think the general public is listening.

If you favor protecting Virginians’ civil rights regarding gun ownership, then it is absolutely critical that you help Ben Chafin get elected in tomorrow’s special election. VCDL PAC Chairman Bob Sadtler gets it just right in an email circulated earlier this evening (emphasis mine):

Although he’s been a member of the House of Delegates for a short time, Republican Ben Chafin has an actual voting record (unlike the other two candidates) and has been a reliable pro-gun vote on any gun legislation that has come before him. I expect his pro-gun voting record to continue when Ben is elected to the Virginia Senate.

Much has been made of the Democrat’s position on gun rights. He answered VCDL’s survey Very Pro-Gun. However, he was caught on audio supporting both handgun registration AND bans on modern sporting rifles like the AR-15. He has since posted on his website a statement stating that his statements on this recording did not represent his true values.

The truth is, IT DOESN’T MATTER. A vote for anyone but Ben Chafin will cede your gun rights in the Virginia Senate to anti-gun zealots Dick Saslaw and Donald McEachin.

As we saw earlier this year when the General Assembly was in session, the McAuliffe/Saslaw/McEachin gang want to do everything they can to kill any pro-gun legislation originating in either the House or the Senate and they will use underhanded parliamentary maneuvers to advance anti-gun legislation in the Senate.

Gun owners can’t allow that to happen. That’s why gun owners in the 38th Senate district must stand up and say “No” to the McAuliffe/Saslaw/McEachin gang.

If you live in the 38th Senate district, PLEASE VOTE FOR BEN CHAFIN TOMORROW, TUESDAY, AUGUST 19TH! Your gun rights for the next year depend on it.

Spread the word and get as many friends, neighbors, and fellow gun owners to go to the polls with you and VOTE FOR BEN CHAFIN for Senate. 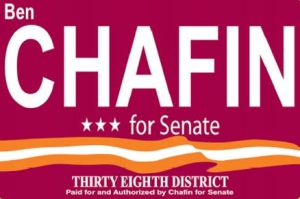 Ed Gillespie appeared at a rally for Ben Chafin in Radford on Sunday evening, and it was striking to see the two of them together — right there in the same room was the possibility of a Republican Senate — at the state and federal levels — and the beginning of the beginning of ending the Democrat’s extreme agenda.

The Virginia Senate fell into Democrat hands at the start of 2014 because Delegate Lynwood W. Lewis Jr won the Hampton district by ELEVEN votes. ELEVENTY ELEVEN!!!