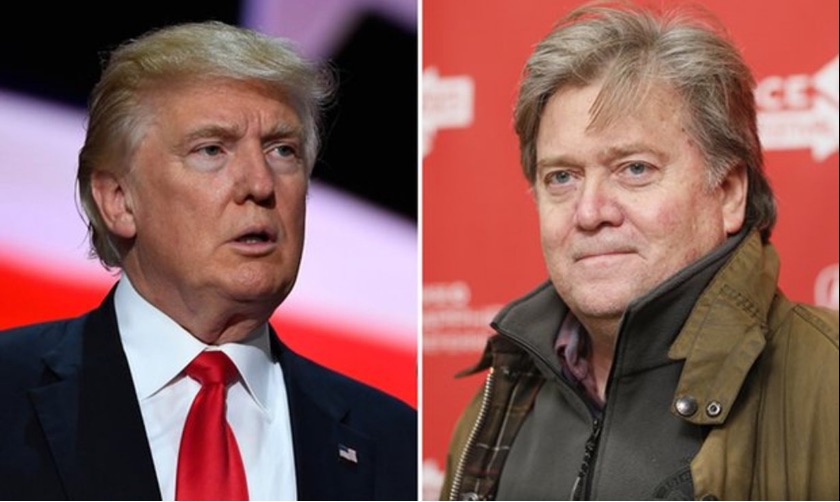 I found it quite amazing to read the latest piece posted here by TBE Guest Contributor John Fredericks. It was definitely a surreal moment to read the Vice Chairman of the Trump campaign in Virginia, and perennial Trump booster, complain about what a disaster the White House is, filled with fat-cat, Wall Street 1%-ers and deep state, neo-con swamp dwellers.  It was especially surprising since just a few short weeks ago the only thing you would hear from die-hard Trump fans is how the Trump Administration was supposedly the greatest, bestest, most conservative Administration ever put together in the history of the world that has achieved more in the first 8 months of his Administration than all the other Presidents in history…combined!!

The only thing that seems to have changed between these two competing views of the Trump administration is the firing of alt-right promoter-in-chief, Steve Bannon (who also hails from Goldman Sachs, but we don’t talk about that. Shhh…).  With Bannon unceremoniously dismissed, he has returned to his Captain’s Chair aboard the S.S. Breitbart and has turned her broadside to face the Trump White House with gun-ports open. With “War” declared, Breitbart has begun lobbing a constant stream of fire on the Trump administration, while Bannon himself declares “the Trump Presidency that we fought for, and won, is over.”

Bannon seems to be playing an interesting game.  He claims he still supports Trump, yet left the White House on his own so he could continue the fight.  He attacks Trump, his policies, and his administration, yet says he is fighting FOR Trump against the globalists who are hijacking his presidency.  One would think that if Bannon were aiming to help Trump and steer him away from the direction the “globalists” want Trump to go in, he would want to stay in the White House in his role as Trump’s “Chief Strategist.”  The truth, however, is more likely that Bannon was finally pushed out by Trump.  Too many people were crediting Bannon with Trump’s victory, taking away from Trump himself, which really ticked him off. It is likely that Bannon’s disastrous advice on how to handle the Charlottesville situation, and its predictable fallout, was the last straw.

With Bannon gone from the White House, it is almost as if the true Trump supporters had their rose-colored glasses ripped off their faces.  They stand around, blinking their eyes, saying, “Holy Cow!  Where did all these globalist, establishment swamp creatures come from?! How did they get in the White House???!?!?!”  They were there all along, folks.  Some of us have been wondering when you might notice them.

The complaints about the current state of affairs is quite confusing, because it is based on a strange contradiction that paints a picture of two Trumps existing simultaneously.  It seems that President Trump is both a decisive executive with a clear vision, yet swayed by those around him into doing things against his interests and the interests of the country.  He is both a strong, conservative leader of a “political revolution,” yet held captive by the mythical (and all powerful) “deep state,” forced to continue the globalist policies of his predecessor.  Ignore the fact that Trump is the President of the United States, who makes the final decision on all of these things, and the people who are supposedly controlling him serve at his pleasure, and can be dismissed with a wave of his hand, and a succinct, “you’re fired.”  This is nothing short of a coup, we are told, to try and remove the greatest President we have ever seen.

This dichotomy of Trumpian depictions is really designed to do one thing: to lay the blame for all of the failures of the Trump administration at the feet of other people, and to protect the image of the man so many of them have come to idolize. So many people have invested so much of their time, money, and effort into the success of the Trump presidency, and in presenting him as a Reaganesque champion of liberty and conservatism, that anything which conflicts with that image is met with indignant, oftentimes hostile disbelief.  Trump can’t be surrounding himself with liberal Democrats and establishment Republicans because he wants to, he is being deceived by those who want to hi-jack his presidency! Trump can’t possibly be pushing liberal policies like keeping most of Obamacare, amnesty for Dreamers, and tax HIKES for the rich because he supports them. He has to be held hostage by the swamp creatures of Capitol Hill!

This hero worship is not exclusive to the current administration.  We have seen too many examples of this in the past, where ideas are supplanted by idolatry, but it is inevitably a fatal flaw that right now is causing serious strife throughout the party.  The only way we are ever going to get past it is for people to recognize Trump for what he really is, and that also includes those who have opposed Trump from the beginning.  For Never Trumpers, it means acknowledging that Trump is not the devil incarnate, sent to lead Conservatism and the Republican party into destruction and despair.  He is just a deeply flawed man who has been a Democrat all his life.  For the Ever Trumpers, it means acknowledging that Trump is not the leader of a new Populist movement dedicated to “draining the swamp.”  Donald Trump was never going to drain the swamp because he is, and always has been, a swamp creature himself.

The truth of the matter is that what we are facing is your everyday, run of the mill, Establishment Republican presidency. The sooner both sides come to understand and embrace that reality, the sooner we can get on with the business of dealing with it, and the way we deal with it is the same way we deal with any Republican president who starts pushing liberal, establishment policies.  We fight.

If we want to see a conservative immigration policy, a conservative fiscal policy, or conservative health care policy, we cannot just accept anything Trump or the leadership set in front of us. We cannot be afraid to call out Trump when he is doing something wrong. We have to continue to fight for the ideas we believe in and have championed for years, not simply accept flawed, liberal policies simply because the President is a Republican, or is someone we supported in the elections. Trump has already proven more than once that he can be swayed by strong, resounding criticism to a proposed policy direction, especially when that criticism is coming from his base.

We have at least three and a half years to go with the Trump Administration, and it will be what we make of it.  If the Never Trumpers do nothing but criticize and offer nothing constructive, and the Ever Trumpers refuse to recognize Trump’s flaws and keep blaming others for his liberal ways, we will be stuck watching a continuation of Establishment rule.  If both sides step away from the ledge and meet the other half way, we can have a real chance to affect the policy direction of this administration in a positive way.

With the departure of Bannon from the White House, it is as if the scales have fallen from the eyes of some in our party, and they have regained their sight.  If that can lead to a rapprochement of “Nevers” and “Evers,” it will be the best thing Steven Bannon has ever done for his country.