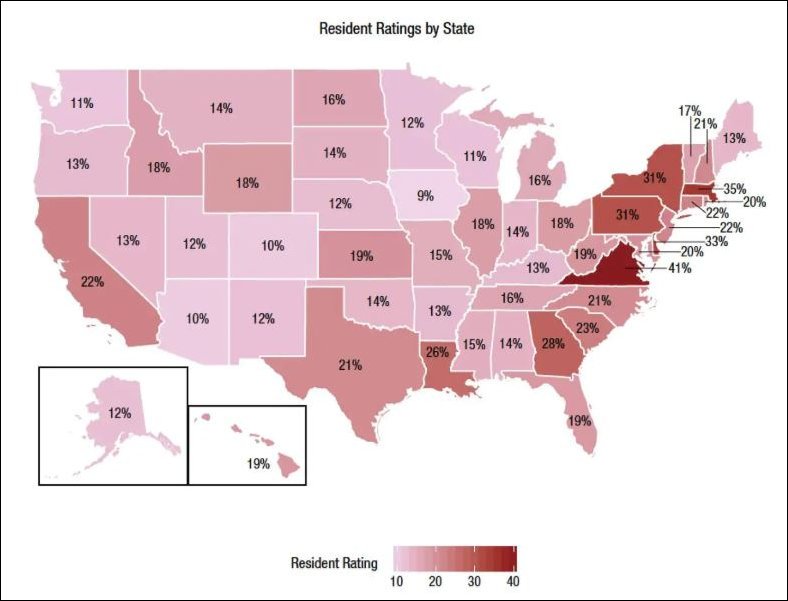 Virginia as the most narcissistic state?

As you contemplate the implications of the previous post showing Virginia to be the most patriotic state in the union, consider a new map ranking Virginia as the most “narcissistic” state.

“Collective narcissism—a phenomenon in which individuals show excessively high regard for their own group—is ubiquitous in studies of small groups,” writes Henry L. Roediger III, a psychologist at Washington University in St. Louis, in a study published in Psychological Science. According to his study, the findings of which were picked up by the Washington Post, collective narcissism applies to large groups like state populations as well.

Roedinger asked people, “In terms of percentage, what do you think was your home state’s contribution to the history of the United States?” Next, he asked them to rate the contribution of other states. Then he compared how people rated their state with how outsiders rated their state. The people of all 50 states rated the significance of their own history as higher than others did. This same phenomenon, which he describes as narcissism, applies to countries across the world. Apparently, narcissism is a human condition.

Except it’s worse in Virginia than anywhere else.

Yeah, yeah, yeah. This is more social-scientific mumbo-jumbo. The methodological flaw is obvious: As a matter of objective fact and reality, some states did contribute more to American history than others!

The reason Virginians regard their history so highly is that so much important stuff happened here. The reason Iowans are the least “narcissistic” is that little of significance happened there! States along the East Coast ranked high because, as a matter of objective fact, their recorded histories go back much farther, they experienced years as English colonies, they fought in the American Revolution, and they debated the Constitution. Some states produced thinkers and leaders who had greater influence on the institutional and intellectual development of the nation than others. Some states fought in the Civil War, others didn’t exist then. Some states were major battlefields of the Civil War, others were backwaters. Some states endured slavery, Reconstruction, Jim Crow and the dismantlement of segregation, others were spared that tragic history. In other words, Virginians are entirely justified in judging their state’s history as significant — as opposed to say, Delawareans (the ninnies), who rank No. 2 on the narcissism index.

If citizens of other states don’t appreciate Virginia’s contribution to American history as much as they should, that’s a blight on their pathetic and parochial teaching of history — and perhaps also a reflection of the nation’s growing historical amnesia — than a mark against our great Commonwealth!!

OK, enough tongue-in-cheek. Seriously, what else would one expect? What else is a Virginia school system going to emphasize — the history of Pennsylvania? No, in addition to teaching American history as a whole, school systems everywhere should teach the origins of their states, the growth of their institutions, and the struggles and conflicts that drove social, economic and political change in their communities. It is only logical that Nevadans learn more about the rise of the casino industry than Iowans do, only reasonable that Hawaiians learn more about the Kamehameha dynasty than Vermonters do.

Finally, residents of states are marinated in their own history. Here in Virginia, Jamestown, Williamsburg, Yorktown, Monticello, Mount Vernon, the James River plantations, and of course the incomparable Bacon’s Castle are part of the landscape and local lore. Texans learn about the Alamo because the Alamo is right there. New Yorkers learn about the Erie Canal because the Erie Canal is right there.

One last point: Just because people are acutely aware of their own history doesn’t mean that they hold themselves in higher regard. Just witness the debate in Virginia over the statues of slave-holding founding fathers and Civil War generals. This morning I received an email from my son-in-law in response to my recent post on how Richmond’s monuments commission recommended preserving the Lee, Jackson and Stuart statues and adding context. Said he: “So the statues will be cautionary now? As in ‘beware the influence of racism, exploitation, and dehumanization lest this be you!’?”

Many people loathe their history. I don’t call that narcissism except in the narrowest possible, social-scientific meaning of the word. In sum, what Roedinger’s study shows is that people of a particular state know their own history better than other people know it. What an earth-shaking surprise.

Virginia as the most narcissistic state? was last modified: July 7th, 2018 by Guest Contributor James Bacon

They just reported that one of Richmond’s narcissists harassed Steve Brannon while he was in a bookstore. The bookstore owner called the police on the harasser who promptly fled the scene. Just another Red Hen creep.