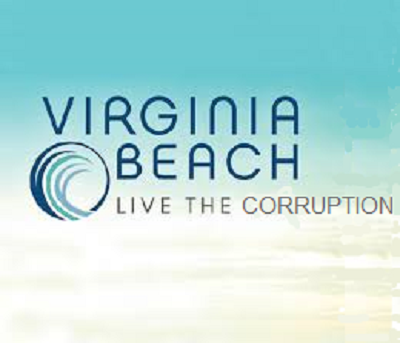 Virginia Beach – A place for Corruption and Oligarchy

Is there anything riper for corruption than a resort town oozing with tourism dollars and defense spending?  It’s the double whammy of insider deals and opportunism. As if having Bruce Thompson and Towne Bank’s name on every other publicly-funded pet project wasn’t enough, now Beach leadership is trying to convince residents they are too stupid and misinformed.

A recently released city budget for fiscal year 2019 includes tax increases across the board; including hikes in the trash fee, property taxes, and tobacco products. You see, three weeks prior, the city orchestrated a dog-and-pony show billed as a “public input session” in which we were surrounded by lackeys in blue shirts who were supporting the new Pherrell Williams endorsed “Wave Pool” project. The whole thing reeked of propaganda and three -card Monte.

A smart man once said that good ideas don’t require force. They also don’t require propaganda campaigns, back-dealing city managers or fake dog and pony show ‘bid processes’ to shore up support. Our beloved City Manager Dave Hanson was again caught in the spotlight recently, this time for saying he wanted to punch State Transportation Secretary Aubrey Lane in the face. Hanson has also been under scrutiny for comments about a failed light rail referendum, in which he suggested the state should have just “found ways to build the damn thing anyways.”

During all this kerfuffle, the beach continues to dress up its errant campaign to remove all semblances of charm from our seaside town. The last few “input session” I have attended have felt more like a timeshare pitch than a stakeholder meeting. Scratch that; at least timeshare pitch gives you free swag… it was more like this. Recently on March 7th taxpayers were invited to our $160 million convention center finished just 9 years earlier for a public input stakeholder pay your damn taxes and like it presentation on how they wanted to spend $190 million on entertainment projects.

While the current powers that be want to turn our city into Disneyland North, roads go unrepaired, schools go unfunded and thousands of residents remain in danger of home destroying floods due to poor stormwater drainage.  The kicker, and stop me if you’ve heard this one, is that most of these decisions are made by a small cabal of original recipe lobbyists, extra crispy bankers and a side order of nepotism.

Dorothy Wood is chair of the Virginia Beach Development Authority, a collection of unelected bureaucrats who get to decide where $40-$90 million of our tax dollars go every year. As previously reported, they have spent 300K on a Happy Gilmore-esque “Top Golf” and 2 million on a brewery that is shutting down after a year in service. Her son, Jim Wood, sits on City Council. John Uhrin, who was the president of the VB Hotel Association when elected, has a wife who worked with the real estate broker who was on the recent deal to publicly fund a $30 million restoration of a 20’s era hotel. The family of Ben Davenport, another city councilman, run Davenport Group Real Estate and own several real estate interests around the newly created and tax-payer subsidized “Vibe” District.

Oh, did I mention our mayor was convicted in a court of law of actual corruption?

New leadership is needed ASAP. Several contenders are running for council in 2018, including small businessmen John Coker and Tim Worst. Virginia Beach representation needs to change or the lingua franca between the unholy union of frivolous development and big government will be our hard earned savings.