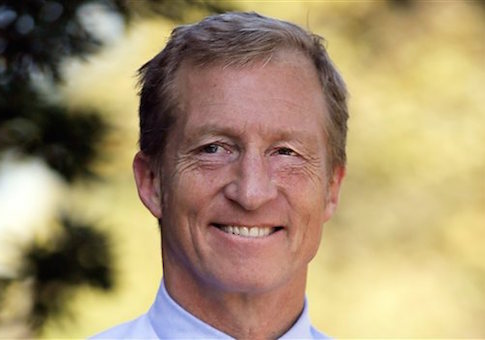 Virginia is one of two states that have elections every year. Every six months or so, Virginians from across the commonwealth head to the polls to vote in primaries and general elections, with everything on the ballot from House of Delegates to U.S. president. A few pundits and pollsters treat our off-year elections as referendums on current events, but until Donald Trump rocked the political world in 2016, very few outside the commonwealth even knew we had elections.

That has all changed.

I became worried and confused when last week I read of Tom Steyer’s push to indoctrinate our college campuses. Worried because elitist Democrats are attempting to use our youth as pawns in their political games, and confused because the people losing their minds over unsubstantiated claims of “Russian collusion” in our elections are the same people applauding outside influence from rich Californians.

One can make the argument that because Steyer is a U.S. citizen, he is justified spending millions in Virginia. However, U.S. citizen conservative billionaires are, surprisingly, less welcome on college campuses. In fact, students at George Mason actually sued their school over donations taken from the Charles Koch Foundation. I won’t hold my breath for a similar lawsuit over Steyer’s money.

Imagine a headline that reads “National Rifle Association to Invest $2 Million in Virginia’s 2nd and 10th District Congressional Races.” Indivisible would break out a call-your-congressman script within 24 hours. For at least a week, our GOP members would be inundated with angry calls from a very vocal minority. Signs would appear that read “NRA Owns the GOP,” and rancorous mobs would protest outside of district offices across the commonwealth.

Instead, the headline is “Billionaire from California to Invest $2 Million in Virginia Elections.”

This isn’t even the first time Steyer and his group have had an interest in our elections. Just last year, he dumped $2 million into Ralph Northam’s campaign. But there was no public outcry, no protests, and no clever signs.

I could pretend to ponder the reason someone living more than 2,000 miles away would invest in a statewide election, but the answer is very simple. The Democrats are still reeling from perhaps the biggest loss in their history. It was Hillary Clinton and Tim Kaine’s turn. We were supposed to get more welfare spending, open borders, and a Planned Parenthood on every corner. Instead, Donald Trump exploded onto the political stage and destroyed the left’s hopes for a dynasty.

If we are actually worried about outside meddling in our elections, we should first look internally. Many have accused Republicans of, for example, being owned by the NRA. The NRA has donated about $685 thousand to Republican groups in Virginia all told (and $91 thousand to Democrats). Planned Parenthood has given nearly $4 million to Democrats in Virginia. The League of Conservation Voters has given $6.25 million to Democrats. Who really answers to whom here?

Steyer’s appearance should be a warning to all Virginia conservatives. The left doesn’t care who you are or what you stand for; it wants to beat you into extinction.

John Whitbeck is chairman of the Republican Party of Virginia and may be contacted at [email protected].

This author/RPV Chairman tells us to be wary of the elitists and crony capitalism it fosters.
We should and we should also apply this to Republicans or those Republicans will feed off of us taxpayers.
On that note did Republican Senatorial Candidate Delegate Nick Freitas take the contribution of $1,500.00 from Syncronized Construction Services Inc. before the corporation was awarded the track improvements contract for Orange County High School or after?
Will Senator Kaine exploit this fact in the November election?
Corey Stewart hasn’t, why is that ?
Underneath Corey has Class.

We need to run ads and play up social media in order to counter this and Steyer’s national ads that have been run on TV calling for Trump’s impeachment. Is there any plan to make an issue of pointing out to those on campuses that these initiatives come from big funding from a West Coast billionaire?

If money is speech, who should fear its expenditure?

Well, duh, a lobbyist that doesn’t pay for access can’t be that good of a lobbyist.

It’d be like someone trying to paying money to affect elections of those not representing them… oh yeah. That’s what Whitbeck said.

R,
We have determined that the RPV Chairman’s (Whitbecks) duty was fund raising.
As long as fundraising
(not issues or previous job performance) appear to drive elections should the RPV Chairman be looking at promoting candidates that desire to end the amounts or what contributions are used for.

I wonder if the RPV chair cares to list any Va. legislation (current or past) that might assist in this?
Who are the Democrats voted against it?
Who are the Republicans?

I’m cool with the RPV Chair raising money for our nominees, it’s up to the party faithful to select the nominees.

What use is a strong cohesive Republican Party to the disaffected personality-based, politically-naive, mutual admiration societies be they ‘Liberty,’ ‘Tea’ or ‘SUV?’

I am an individual who once voted across the board Republican, I towed the line.
I do not tow the line anymore.
I am in 100% full support of Mr.Stewart, Congressman Bratt, Congressman Garrett and all here know of my full backing of our President I voted for , then I yield with full caution with all others.
America and the working men and women of America have done their job in placing Trump in office, that is the lobby check that every other Republican should be cashing and if those other Republicans can’t seem to muster the fortitude or courage to stand with him and the working men and women of America why should they stand with them? United We Stand!
This unity must be 365 days a year not just a Tuesday in November.

The Republicans that want a free flow of foreign labor (which they do not require abide by the same laws as citizens) should muster up some courage go to the boarder today and stand against Trump and all of us on the world stage.
MSNBC will be waiting there to put them on the news, then they can go onto California and dine with the other side of the same coin, Nancy Pelosi.
I stand with Mr Stewart and Jerry Falwell Jr. It appears the only place to find the legal contractors in Lynchburg, Virginia are at Liberty University.
R,
It is up to the Congress to determine the fate of the illegal immigrants, it is up to Virginia to enforce our State employment and Contractor law and this is where I part with the Pelosi Republican.

That has especially been the pattern since Bubba Clinton came to power in the 90s. Believe me, Clinton is a genius at using the government and all its resources to his advantage. Corporations and billionaires paid protection money to Clinton’s Murder Inc. If you didn’t you would get a call from his EPA, the DOJ Anti Trust Division…. the DOJ Civil Rights Division… Bill and Hillary didn’t collect half a million dollars for every speech to an investment bank or corporation for nothing… They knew it was pay to play time.

Plus don’t think for a minute that corporations and billionaires want small government. That scumbag Bezos makes a fortune off of cloud based storage for government agencies.