How Virginia conservatives and libertarians are working together

Like my parents and grandparents, the extent of my political involvement was a being a registered Republican voter of Maryland. Within three years I had volunteered for no fewer than five Republican campaigns. Needless to say, after knocking on doors, making phone calls, and spending many late nights in campaign headquarters, I have learned a lot, gained friends, and created political relationships across the Commonwealth.

Yet in the beginning, I wondered “Who would possibly welcome a young libertarian upstart into a party dominated by an older, well-established generation??” Granted, party leadership was indeed excited to see the young faces of eager Ron Paul supporters. Right up until we broke the 11th commandment.

“Thou shalt not speak ill of any fellow Republican.” Sounds well-intentioned, but what happens when that means supporting certain “fellow Republicans” who refuse to or can’t take a stand for the Life, Liberty and, Property of the individual? Is pointing out the hypocrisy of supporting Republican candidates who are unable to uphold Republican principles truly a damnable offense?

I have heard the question, “Why do you always attack Republicans?” I’ll let you in on a little secret: libertarians have a higher disdain for liberal politicians than conservatives and moderates do. Rest assured, from protests in the streets to duking it out on Facebook, we have made our voices heard. We have come to take our country back! What better way than to reinforce the party of our fathers? Who better to constructively criticize Republican representatives than their own constituents with fresh ideas?

But we are not alone in our criticism. Many fiscal conservatives I disagree with on social issues recognize one indisputable fact: the future of the Republican Party is in serious trouble! Attend your local GOP meeting and count the number of those under 30, heck, even 40! Of course there are a few students bolstering their resumes and taking jobs thanks to a 16% youth unemployment rate, but where are the passionate young volunteers? After being told to show up, sit down, keep quiet and do as they were told, they left. And who wouldn’t? The only youth accepting that kind of mentality voted for Obama or get paid to work for their candidates. 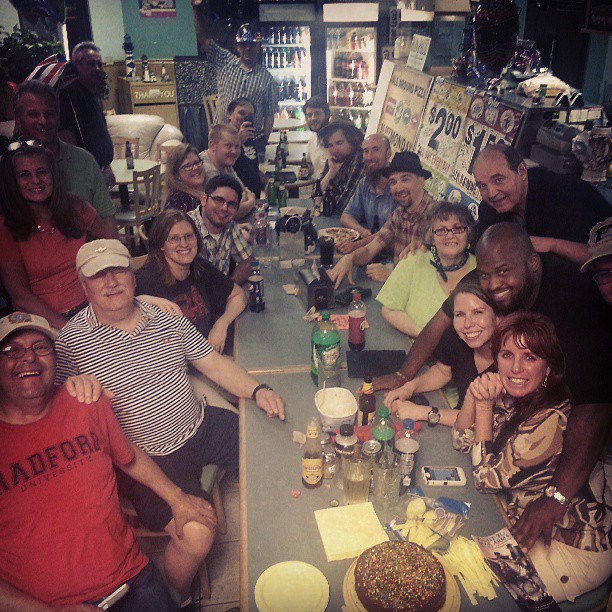 Conservatives and Libertarians Breaking Bread Together in Virginia Beach

So who truly reached out those of us younger generation disillusioned with the status quo, despite our creative tantrums? Those who understand the future of the GOP lies in the hands of these young, libertarian upstarts who should be embraced and given a seat at the table. While conservatives and libertarians disagree with each other on certain issues—and there is no shortage of disagreement—that has not been a problem. We are working together to keep our party from slipping into obscurity like the Whigs or “drifting left” like the Democrats. We adhere to the Republican Creed, hold our elected representatives accountable, and fight together for that seat at the table, side by side. And we have made great progress!

In 2012, faster than Republican leadership could blink, district conventions across the state were filled with the ranks of excited libertarian activists,Tea Party patriots, and fiscal conservatives united under one banner: reform. In the race for district chairmanships, state central committee seats, and national delegates, conservatives voted for libertarians while libertarians voted for conservatives. My own 2nd district and our neighboring 3rd were prime examples of this beautiful coalition for freedom. We wanted to take the party from the consultants and corporatists, giving it back to the grassroots activists. Result of unity: Victory.

Nearly half of the delegates to the Republican National Convention represented libertarian Ron Paul, over moderate Mitt Romney. Simultaneously, our united Virginia delegation was the only to vote unanimously against the top-down philosophy rules changes that caused a huge uproar nationwide. The now grassroots-controlled state central committee put the nomination process back into the hands of the party, which had given us the winning ticket of 2009, as opposed to the hands of all registered voters (including Dems) that led to the defeat of McCain, Romney, and Allen. Unfortunately, this power shift did not go without repercussions. Bill Bolling, being sore about having to drop out of the race for governor refused to support Ken Cuccinelli and even briefly entertained the notion of running as an independent. Virginia Beach mayor William Sessoms let his membership lapse to endorse the democrat nominee (for the 4th time) and Republican consultants jumped ship, working for the biggest Democrat fundraiser: Terry McAuliffe. Result of division: Defeat.

Here in Virginia Beach the voices calling most loudly for “unity” are the same calling to seat just 32 of over 1,000 delegates filed to attend my district convention, the first organized push for slating in 30 years. So I ask you, while conservatives and libertarians are coming together for a single cause, what keeps moderates from joining us? Why don’t the self-proclaimed “party faithful” embrace the new generation? Why not come together under the banner of the Republican Creed? The future of our party literally depends on your response. Respond quickly, for time is running out.