Virginia Delegate Joe Morrissey (D-Henrico) is under investigation for taking indecent liberties with a child.  A 17 year old girl was found by police at Morrissey’s home on Friday night.  The police were called by her father.  In 1999 Morrisey was found guilty of assault after beating a man and threatening to kill him.  After this brutal beating Morrissey lost his license to practice law.

Today the girl’s mother issued a statement saying that nothing had happened in Morrissey’s home.  According to her mother the girl is a part time receptionist in Morrissey’s office and was at his home to discuss a personal matter with the full knowledge of the mother. (Who hires a 17 year old receptionist to work in a law office?)

Joe Morrisey is the Delegate who brandished a firearm on the floor of the House of Delegates with his finger on the trigger, exactly the WRONG way to ever  handle a firearm.  Fortunately no one in the room was injured during this stupid stunt by Delegate Morrissey. 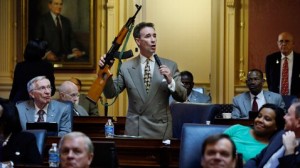