Virginia Democrats in Debt, Look to Taxpayers for Bailout

The Democratic Party of Virginia is in dire financial straits, but officials don’t appear worried, and instead seem rather relaxed. Why? Because the taxpayer is going to bail them out.

It is with mild amusement that I read that DPVA is mired in as much as $600,000 of debt. As much trouble as their Republican counterparts may have had at various points in recent memory, never have we been saddled with that kind of liability.

This says something about the parties’ respective approaches to OPM: Other People’s Money. But it’s not just the obvious comparison that Republicans cut back and operate more frugally to avoid insolvency, while Democrats continue to borrow and spend and spend. This particular debt dilemma goes even further in illustrating the Democrat belief that there is no problem that can’t be solved with even more of Other People’s Money. 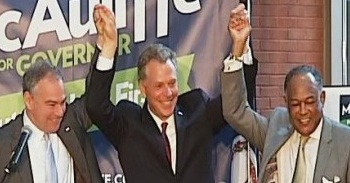 In this case, Richmond Mayor Dwight Jones is the key player.  You see, Jones is not just the mayor of Richmond, he’s also Chairman of the DPVA—thus responsible for the health of his organization and how to deal with all that debt.  Coincidentally, Jones has a convenient vehicle to deliver himself and Virginia Democrats from this problem, in the form of construction of a new baseball stadium in Richmond’s Shockoe Bottom, a project Jones has been pushing for quite some time.

How does that benefit DPVA, you ask?  Well, as it just so happens, the DPVA headquarters building (purchased in 2008 for $1.15 million) is located directly in the path of the wrecking ball.  In fact, their building backs right up to where the third base line will be.  So, DPVA stands to gain quite a windfall with the sale of its building to a project that has been pushed from the beginning by their own chairman.

Folks, this is what a real conflict of interest looks like.  Compare and contrast.

Making matters worse, as Norm Leahy points out, the project is completely under the management of Mayor Chairman Jones’ quasi-governmental Richmond Economic Development Authority (“EDA”), and the EDA isn’t subject to the same set of rules as the government:

In a nutshell, the EDA is not bound by the Richmond City Charter and City Code, creating an alluring legal loophole. The Richmond EDA could award millions of dollars in contracts for the stadium and other facilities without competitive bidding. EDA rules also allow secrecy to protect the identities of subcontractors, lawyers, public relations firms and lobbyists working for the winning main contractors.

Wow. Recognizing the potential public relations disaster, a group of DPVA poobahs have now apparently beseeched Mayor Chairman Jones to recuse himself from any of the DPVA’s considerations on the sale of their building. Party spokesman Ashley Bauman said, “We’ve created a firewall between the mayor and any discussions with the building.” Yep…that clears it all up. Move along, people, and pay no attention to that man behind the curtain.

Virginia Democrats in Debt, Look to Taxpayers for Bailout was last modified: May 21st, 2014 by Chad Ochocinco

It’s not corruption yet. My house ain’t worth no where near what it was in 2008. Is that building? What is your basis for a “windfall”?

Thanks President Bush, for making my house worth about $60,000 less than it was.

Shame on Bush for his crazy idea that every American should own a house. That lead to so many problems in the housing market and the bubble.

Also, it is oblivious that the women in this blog are far more intelligent than the men, myself included.

We need more women in government.

Anything new on jobs or the economy Steve?

I wrote a piece on the economy just the other day, Jim: http://thebullelephant.com/negative-interest-rates-perpetuate-depression/

My Zero Hedge capital finance readers thought it was pretty on point, you may find it interesting.

Yep, I did. Not sure how I missed the article? Thanks and thanks

Quite welcome. For future reference, I’m the economics nerd on the team. The blatant rigging and politicization of capital markets is one of the elements that moved me from “politically interested” to “politically active”.

I have noted your particular interest in jobs growth. Jobs are a second-order effect of other economic conditions – they are created primarily in an environment where small businesses are healthy. While I don’t often tackle the issue of jobs specifically, for that reason, I do address the reasons why small businesses are not being formed and are not hiring. I believe that in a free market, rather than one rigged to favor the wealthiest and largest players therein, the jobs problem solves itself as small business would have an environment in which it could prosper.

So, I think what you are saying is that we need another Joe Kennedy to clean up the markets, again?

I was thinking more of Andrew Jackson.

Really, thinking outside the box, Fred Smith/ Susan Martinez in 16′?

I know, how many hidden bodies? But, maybe the media would sanction it for the profits involved?

Good article, exposing Democrat corruption. The Examiner should pick this story up.

Wow! Steve – this is the kind of stuff that makes a true conservative’s head explode. I am furious after reading this -and am spreading the word to all my like-minded friends! Thanks for the great piece – I love this news blog – you all do a great job here!

FOIAs? What ever happened to transparency in government? Sounds like a lawsuit or two is in order. This is an issue that could bring the Tea Parties and Republicans together. A Kum-ba-yah moment!

Great article. Whatever happened to the Richmond tea party? This is the exact kind of corruption that grassroots needs to hone in on and protest!!

Great story. Someone needs to fire up some FOIAs so we can see just how impenetrable that firewall is.

We need to flood Richmond with FOIAs… We need to share this article with Breitbart & Drudge.

Explain the scope of these FOIAs that you want so badly?