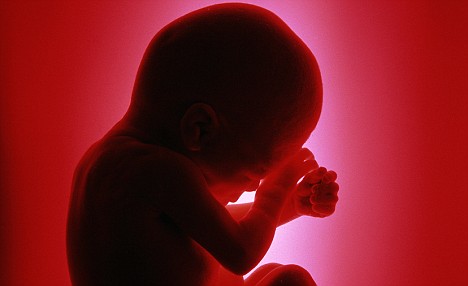 If you or anyone you know are considering voting for a Democrat in the Commonwealth in November, think again. Virginia Democrats are waging an all out assault on pregnant women. Democrats in this State have no shame, no conscience and no heart. I say this with all conviction, DAMN THEM!

Not only are Democrats purposefully driving up healthcare costs in the Commonwealth, they are rolling back safety and health regulations in clinics. For those who read my posts on a regular basis, this one will be short and sweet. Democrats despise women and they have no compassion for unborn children.

No issue has split apart the Republican Party the way abortion has. Moderates tell us that we aren’t allowed to talk about this issue because it will cost us elections. Minus the Catholic moderates who, despite all our other disagreements, have at least been with us on this one issue. Moderate Republicans oppose this final solution. Shaun Kenney, at Bearing Drift, has written countless articles about abortion. As anyone who has followed me through the gauntlet of various websites I’ve written for, you know this is an issue I care deeply about. I just wanted to point out that a member of the rival gang is as passionate about this issue as I am. I’m not alone.

If Democrats in this state want to kill babies and they carry the majority, then fine; but they can at least protect the health of women carting their babies off to these death camps. Right? Do you really want to live in a State that not only allows the slaughtering of children, but refuses to protect the health of the women dragged into these facilities by necessity and men who refuse to care for their offspring?

Over the last few years, Democrats have viewed their path to success through the prism of social issues. They ran the gambit of gun control in the commonwealth, only to discover that we weren’t going to budget an inch.

Now they want to harm the women who feel they have no other choice but to do something the majority of us find reprehensible.

Look, I know for a fact that women put in this position aren’t put there out of coldness or cruelty. They are put there by circumstance and society. If we can do nothing to save the lives of the unborn, we could at least protect the lives of the women that go in for abortions, right? No. Democrats don’t care about these women. They just want high abortion numbers. They just want to limit the ill-effects of their social-welfare policies. Damn Them!

It’s about time that the authors at Bearing Drift and The Bull Elephant come together to save lives and to support life. No? Yes?

There has recently been put forth questions about Hon. Congressman Dave Brat, by what can best be described as used car salesmen establishment types. Is it not only fair to ask the establishments own Congresswoman Barbra Comstock about her purity?

Nothing demonstrates how low we have fallen as a society more than abortion. Slaughtering innocent children is more abhorrent than any other evil practice we have witnessed in the USA in our entire history.

Ending abortion SHOULD be a uniting principle of Republicans and abortion should be a millstone that pulls Democrats down.

But what indication do we have that Republicans can unite around anything? This is just one of many issues we can’t agree on.

“Deliver those who are being taken away to death, and those who are staggering to slaughter, Oh hold them back.” (Proverbs 24:11 NASB) Since 1973 our most precious and primary “inalienable” (eg., unchangeable or unalterable) right to life has been sublimated to a “evolutionary new civil right to privacy.” Yes Americans and Virginians are divided on this right to kill, but God alone will be the Ultimate Judge of what is right and what is wrong more so than what is now legal or illegal, moral or immoral. For life does begin at conception and a baby’s heartbeat can even be heard as early as sixteen days after conception.

Just when I think rightwingers can’t sink any lower, can’t say anything more ignorant . . . they do.

What a load of crap.

You, line ’em up you bastards.

a littly testy? Just because you write something that is not loved by all?

If he actually wrote things loved by all, he’d be part of the 4th estate cabal.

Hey, quick question, how did you get assigned TBE, was it just on the screen or did you have some connection to this state?

Parking regulations and corridor width rules don’t do a damn thing for women’s health. But you know that. If you want to make abortion illegal, go at that directly. But you will never accomplish that goal, and you know that too.

At some
point a civilized society has to realize that killing its unborn children is
not just immoral, it is worse than barbaric.

If you Bruce Hendrick, and you that hides behind the old redneck moniker, think
that is a load of crap, then you are already damned.

I’m with Tucker on this.

America has allowed the murder of 59 million (mostly black) children, and
because of that we may all be damned. I will continue to oppose you who murder
children out of convenience until the day I die; then I’ll take my chances with
my Maker.

Never say never Bruce; at some point your loyal minority voters may wake up and
realize that you have been killing their babies for decades, and they may not
take that so well.

Isnâ€™t this is where you start calling me names?

so, you are agreeing with Bruce? This is not about regulations to safeguard women but rather a way to eliminate abortions?

Don’t put words in my mouth, or his.
I do oppose abortion; that’s true and I will own that.
So you agree that murdering the unborn is about women’s healthcare?

But this article is about regulations and the position that they are in place to safeguard women – you changed the topic! Focus!!

How will these regulations safeguard women?

exactly – the writer claims to be interested in safeguards but is actually attempting to promote abortion bans, only using false arguments – while appropriate for TBE, not a great bit of writing for anyone else

thanks for the agreement

It depends upon which women you wish to safeguard.

Steve writes, ” but they can at least protect the health of women carting their babies off to these death camps. ”

Bruce’s point is that this position is nonsense and that the question is truly about abortion, not about the “health of women” as Steve writes.

Why avoid the questions. Is Steve merely distracting from the true issue or is that a real issue that these regulations address?

So as long as we just abort xy that would be cool, but given a woman’s right to abort is absolute, then aborting a woman who could one day herself abort is just murder.

you are avoiding the question – is this a well argued article or is it drivel? Don’t abort the topic

Whether or not you’re in favor of convenientcides, appropriate medical sanitation is certainly in order.

this is not about sanitation – none of the over-the-top regulations will make any differnce at all. Steve knows that yet writes this drivel. Everyone else knows it too. Stop pretending and attack the issue head on

If you care to favor survival of the more experienced female, then you wish to avoid adversely affecting the ‘life of the mother’ (trigger) Anti-Moms Lives Matter!

Why do you advocate against Women’s health this way?

I believe he is pointing out the hypocrisy of Demoncrats who claim to be SO concerned about women’s health that they sanction the murder of unborn children, but draw the line at having that murder take place in a facility that at a minimum, meets established medical standards that are designed to prevent infection and other complications, and to insure adequate access to doctors in the case something goes wrong and the mother’s life is truly threatened.

no, he is arguing for regulations that will have no impact – thanks for seeing it my way

This 59 million are called the missing American workforce. The democrats want those American deaths because they are afraid of Americans being difficult to politically control. Much easier to import 3rd world migrants who will stay gratefully on the welfare plantation.

what a nut job – nobody “want those American deaths.”

Apparently you do not see they contradiction in your statement. If nobody wants them, then why are there 59 million? Obviously, those deaths are wanted.

Then let them find a way without my help – and be accountable for it. A woman has a choice and it is an individual choice. To make it into a collectivist social justice issue is ugly und unconscionable.

A woman has a choice to kill another human being?

Yeah, it would be ugly and unconscionable to make that an issue.

What IS unconscionable is the murder of unborn children by the millions.

My point is this. Abortion has been turned into a political issue when it is really a personal issue.

We have built a society where failure is no longer personal but involves everyone in some way. The individual having the abortion should suffer the consequences and not distribute the consequences across the entirety of the American population.

Did women die in back alley botched abortions? Yes, but they were few and far between. Today abortion is prevalent and no more significant than a bowel movement to far too many young women.

We have effectively aborted 60 million future Americans or approximately 20% of what would have been the American population. This is unconscionable.

Have you interviewed any of these woman or are you projecting you own anxieties? When you say they care about abortions as much as they care about pooping, do you have any facts? I imagine that once again you are posting your feelings and truth. Perhaps abbot of actual research would help you sleep better at night

Apparently, you haven’t read any of the celebrity magazines and their interviews extolling abortion.