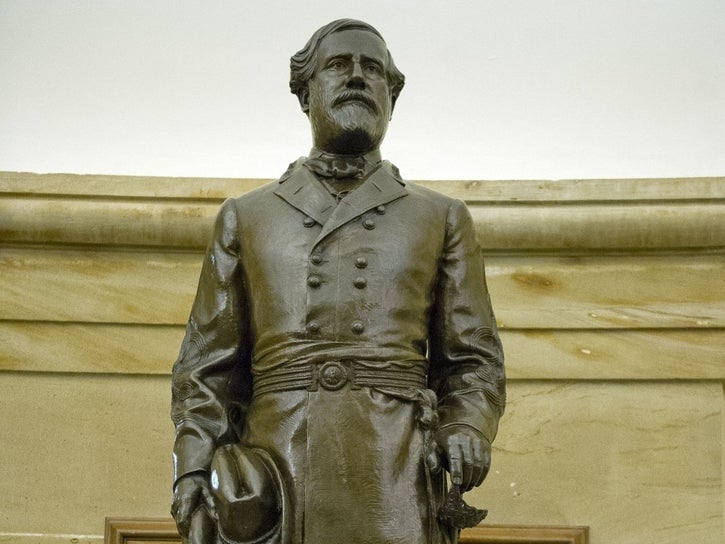 Virginia Democrats Whitewashing Their History, By Tearing Down Ours

While most Virginians raced to spend the Christmas holiday with their families, Virginia Democrats raced to be the most self-righteous and the most outraged, with many calling for the removal and replacement of the Robert E. Lee statue in the U.S. Capitol building. But no one wants to call this what it really is – the far left’s hypocritical attempt to whitewash racism in Virginia’s recent history, committed by Democrat leaders still in office today.

First, let me be clear – all American history, even slavery, should be represented and not painted over. Virginians should be educated and reminded of our past to ensure such horrors do not repeat themselves. That is why we should not rid ourselves of historic reminders like statues. When we cover up unappealing history and the reminders of its existence, we run the risk of allowing such beliefs to manifest in younger generations who become completely unaware of our collective history.

Our own Governor Ralph Northam says removing the Robert E. Lee statue is something he has “long wanted to do,” but was that before or after it was discovered he dressed in blackface as an adult man and Virginians called for his resignation? If Democrat Reps. Jennifer Wexton and McEachin are so passionate about removing the statue, do they also believe our governor should resign for his own racist past? What about The Washington Post, whose sympathetic reporters are jumping in today to revise history for Governor Northam, lauding his heroic comeback merely ten months after they were speculating about whether he should resign? ​

As an African American man, I am fully aware that racism exists today, but I live my life and raise my daughters with the belief that we cannot let it affect our lives, we cannot harbor bitterness. And we cannot whitewash over the governor’s indiscretions any more than we should our history of slavery, that too many, Robert E. Lee represents.

History is not only about battles won, but about the lesson in history and the reason battles were fought in the first place. Our mistakes do not need to define us, but teach us lessons to be better men and women. But that’s not what Virginia Democrats are concerned about. Virginia Democrats want to exploit African American voters with righteous indignation over statues to distract from their own hypocritical offenses and to avoid talking about the issues that matter to Virginia families today. Issues like unemployment, criminal justice reform, education, and economic opportunity – all issues, coincidentally, President Donald Trump has been focused on and delivering on since the day he took office. We are better than that.

The fact that a Republican president has delivered more tangible wins for the African American community than the Democrats pushing to tear down a decades-old statue is something the liberal left cannot stomach. The fact that someone in their own party committed a racist offense more recently than the generals of the Civil War is an ugly truth they prefer we don’t acknowledge. But this is not an us versus them debate. We are Virginians, we are Americans. Virginia Democrats would rather we take sides in these debates, pit one another against each other. But we must stand together and learn from the scars of our past – however historic or recent they may be – and get back to doing the work of the people.

Virginia Democrats Whitewashing Their History, By Tearing Down Ours was last modified: January 2nd, 2020 by Guest Contributor Omari Faulkner

Virginia Democrats Whitewashing Their History, By Tearing Down Ours – Omari for Virginia January 14, 2020 at 5:32 pm

[…] Read the full op-ed at the bull elephant here: http://thebullelephant.com/virginia-democrats-whitewashing-their-history-by-tearing-down-ours/ […]