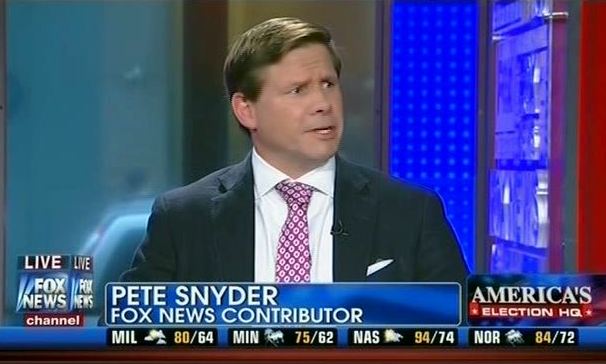 Virginia high-tech entrepreneur and former Republican candidate for Lt. Governor Pete Snyder said today he’s ruled out a run for governor in 2017.  But that’s not all.

Sources close to Gillespie say the one-time Republican Party of Virginia finance chairman, now a Northern Virginia venture capitalist and angel investor will play a prominent role in the Gillespie campaign. “It’s like getting two candidates for the price of one,” a Gillespie operative familiar with the campaign who requested anonymity to talk freely, said.

Snyder’s endorsement and apparent high profile role in the campaign could be a game changer for Gillespie.  Snyder, who many expected to run for governor himself in 2017, could bring much needed grassroots enthusiasm to a candidate who is long on money and political endorsements and short on ardor.

The main boon for Gillespie is the fact he does not have to deal with Snyder in a primary. A Snyder gubernatorial bid would have thrown the race wide open, making it a five way dogfight.

Two recent public opinion surveys show Gillespie, who has a distinct money advantage over his challengers to date, ahead in the race.  But early polls like these are often a direct reflection of name recognition. There is a long way to go.

A poll conducted by Public Opinion Strategies of 800 likely Republican primary voters from September 18-21 found that Gillespie enjoys an 87 percent name recognition, established during his competitive race for U.S. Senate against incumbent Mark Warner (VA-D) in 2014.

The poll has Gillespie leading the field with 38 percent of the vote followed by Wittman at 12 percent, Stewart at 5 percent and Wagner at 4 percent.

Another poll, released last week from Mary Washington University, showed Gillespie leading his rivals with 19 percent.  But in this poll Wagner was in second place at 11 percent, followed by Wittman at 8 percent and Stewart at 6 percent. The UMW survey found that 40 percent of Republicans were undecided and 12 percent wanted another candidate.

While I have my share of personality differences with Gillespie and some of his key campaign staff, there are little actual policy differences between Snyder and Gillespie.  The Snyder endorsement – and apparent hands on campaign involvement — now makes Gillespie a prohibitive favorite to win the GOP governor’s nomination.

Gillespie’s support might be a mile wide and an inch deep.

Wagner’s surprise 11 percent polling in the UMW poll should be a warning sign for Gillespie. Wagner has no real name I.D statewide and his district is smaller than Wittman’s. It may reveal restlessness among GOP voters. Personality wise, Wagner is the antithesis of Gillespie. If he digs into his NOVA vote base, the race will tighten.

I’ve learned three things covering Frank Wagner over the years. One: never count him out. Two: never underestimate him. Three: see one and two.

Stewart is gaining statewide exposure as Trump campaign chair in Virginia as he crisscrosses the commonwealth as Trump’s top surrogate. A Trump win in Virginia undoubtedly propels his ’17 bid.

Wittman is the enigma. He has the capacity to emerge as Gillespie’s chief rival, and if he raises enough money to be competitive – which he will – he could capture the nomination with 30 percent of the primary vote. His conservative bonafides are solid, and he is scary smart. Besides, who doesn’t genuinely like Rob Wittman? If you find someone, let me know.

The winner will square off with likely Democratic nominee Lt. Governor Ralph Northam, who is the morning line favorite to succeed current chief executive Terry McAuliffe.

Say, how much does this primary cost, who’s paying for it, and why?

Pete Snyder. Fox contributor. That’s all we need to know.

Where do you find these slimeballs?

As for Rob Wittman: He’s my representative . . . rather, that’s what he claims to be. He shows up in the district around election time after which we don’t see him for two years.

You got Rob Wittman? You lucky duck, I’ll trade you a Comstock, a Loudoun Chairman, a Sterling Supervisor, and a Broad Run School whackadoo for Wittman!

Funny, someone please take Comstock Rocinate and I will take $10 and some gum if someone will take Comstock.
I’m note voting for her, no way, blank on that slot.

No to Gillespie, he’s a Bush.
Stewart raise taxes all the time in Pee County.
Met Wittmen once and he was very smart in speaking to him

Wagner WHO, VaBch boy, better start getting off the beach and up around the state.

This is by no means either a prediction nor a gaze into the crystal ball but given that political professionals are lining up behind an establishment candidate, big money campaign donors are committing looking for future leverage, many major media outlets are playing up his “lead” far, far in advance of any meaningful context to put such a notion into, I seem to be having a blast of deja vu so compelling that I just can’t get it out of my mind.

O’ yes there it is, but not Ed Gillespie of recurrent Virginia election failure fame but rather his not so distant political cousin Jeb “flash in the pan” Bush that keeps vexing my recall. A lot of events are open to completion in the interim prior to this 2017 race, I believe I will wait to see how they unfold before proclaiming any front runners or favorites.

By the way regarding the content usage permissions process it’s a really simple five-step procedure today.
1.Determine if permission is needed.
2. Identify the owner.
3. Identify the rights needed.
4. Contact the owner and negotiate whether payment is or is not required.

But this may all change with Obama’s give-away of the Internet management process in two days time to a merry group of anti-free speech dilettantes and dictators.

I had nothing to do with the photo. Please share your concern with TBE staff. Thanks! John

It is good to have Republican gubernatorial candidates of which we can all be proud. I think the world of Rob Wittman, but will happily fall in behind whoever is the eventual candidate.

I completely agree with you about Congressman Wittman. He has experience at every level of government in Virginia and is wicked smart. He is the most qualified candidate running for Governor.

Won’t beat the Gillespie juggernaut unless some others drop out.

That’s how folks felt about Jeb!

You’re right, maybe there will be a Trump equivalent to block and defeat the Jeb equivalent.

John, I already sent you a cease and desist notice on using my picture. The next step is court. remove this photo of Pete and stop using my photographs without permission.

Gregg, Again: I had no role in TBE photo choice. Please take up with Team TBE. Thanks John

The picture has been changed.