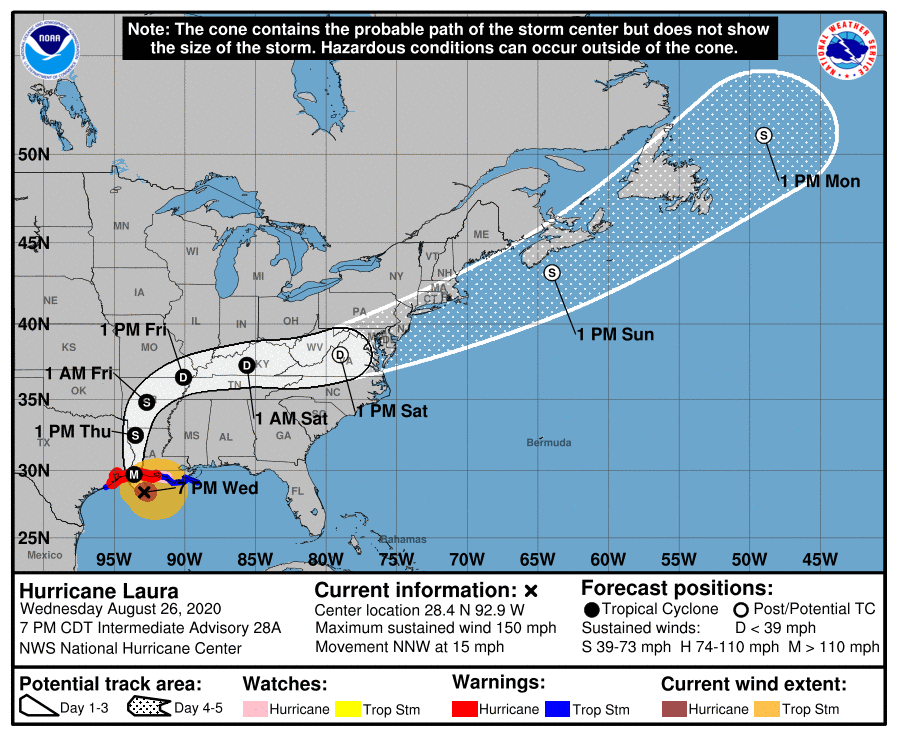 Virginia Has a Prayer

From the latest weather forecast:

Hurricane Laura is expected to strengthen into a Category 4 as it heads for a destructive landfall near the Texas and Louisiana border Wednesday night into early Thursday morning. A catastrophic storm surge and damaging winds will batter the region and a threat of flooding rain and strong winds will extend well inland. …

The hurricane is now a Category 3 with 125 mph winds and is expected to continue strengthening. Laura is forecast to become a Category 4 hurricane later today as it approaches the northwest Gulf Coast.

Laura has prompted hurricane and storm surge warnings for the northwest Gulf Coast.

A huge amount of money over the past 13 years has been spent to create hurricane protection systems not only for Northwestern Texas, but especially in Louisiana. The Louisiana projects have been led by the Corps of Engineers and Louisiana’s Coastal Protection and Restoration Authority and have completely transformed that region, not only with levees and pumping stations, but also with restoration of nearly 48,000 acres of land and 60 miles of barrier islands and berms. In Texas, the Galveston District of the Corps of Engineers has built seven major federal levees.

This storm will likely test the systems like no other.

So, while this is of interest to all Americans, why highlight it on a Virginia blog?

We care here because the two areas of the United States other than in Texas and Louisiana most threatened by a combination of sea level rise and storm surge are Miami and Hampton Roads.  The great Chesapeake and Potomac hurricane of 1933 flooded downtown Norfolk streets six feet deep — before the last 87 years of sea level rise.

We care here because river flooding is regularly deadly and destructive.

We care here because the biggest natural disaster in Virginia history occurred in Nelson County in 1969. It resulted from flooding from Hurricane Camille. It required a special session of the General Assembly to declare over 200 people officially dead because the mudslides buried them so deep (see image above) that the bodies would never be found.  relatives needed the official declaration to get the life insurance of the dead to rebuild.

I spent several years trying to get the state of Virginia to step up as a partner with the Corps of Engineers to at least plan storm damage protection for Virginia’s coasts, rivers and mountains. My home district Delegate, Jason Miyares, introduced a bill I drafted to make that happen.

The joint federal-state hurricane and flood protection planning effort for coastal, river and mountain communities would have cost the Commonwealth something like $15- 20 million for its share.

The Corps of Engineers must be convinced of a state’s willingness to follow through and build to the plans or it won’t spend its efforts and money to do the planning. It will also not recommend to Congress that it prioritize the federal funding that will pay for 65% of the cost of construction without such assurance.

The bill failed. As a result, the state won’t participate.

Virginia cities and counties are officially on their own to pay the full costs of any storm and flooding mitigation not planned and developed under the federal program.

We certainly have hope that the residents and infrastructure of Texas and Louisiana will be safe and their hurricane protection systems will hold.

Virginians will have to stick with prayer.