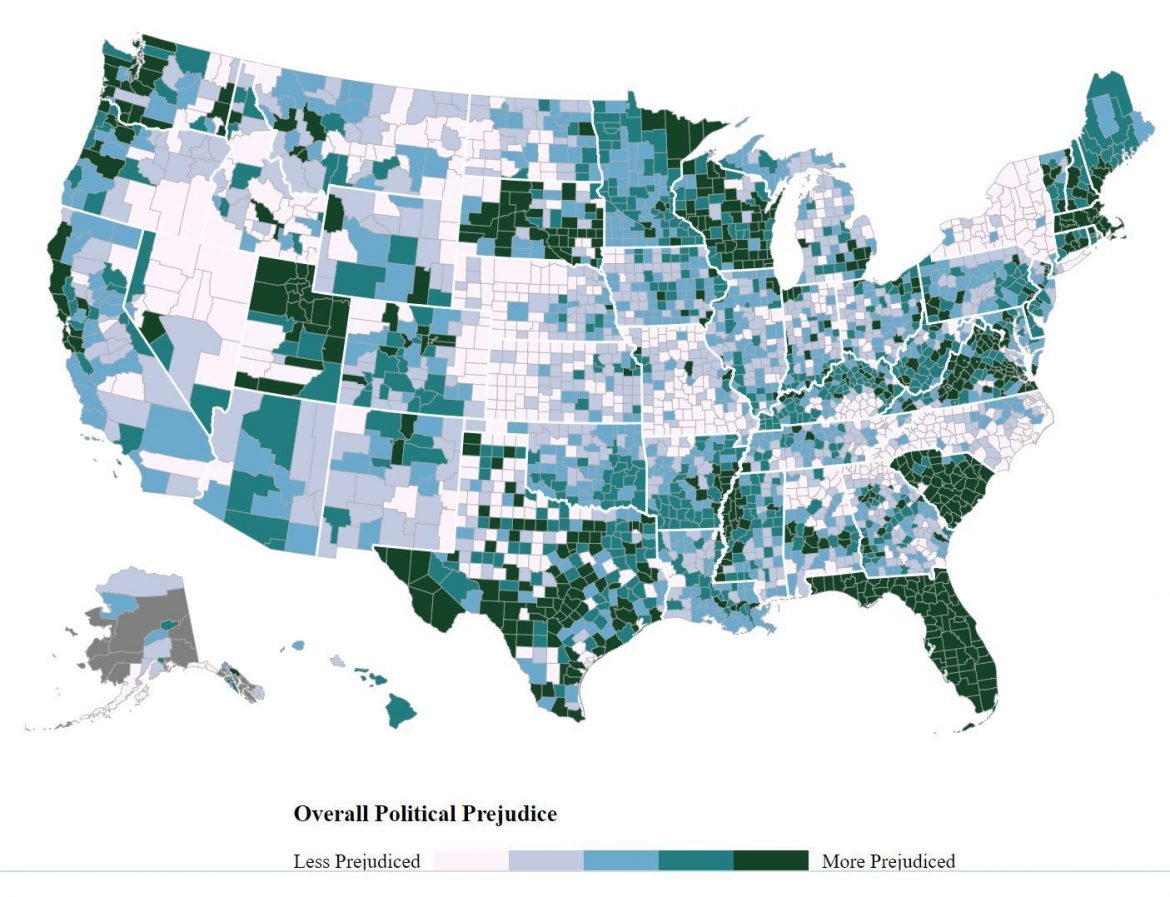 Virginia is for Bigots?

Virginians are among the more politically intolerant people in the United States, judging by a map published by The Atlantic magazine. (Their interactive map is here.) If you accept the validity of The Atlantic’s methodology, such a finding says a lot about contemporary Virginia politics in the era of Ralph Northam, blackface, and the social justice wars.

The Atlantic hired PredictWise, a polling and analytics firm, to create a ranking of counties in the U.S. based on partisan prejudice, or “effective polarization.”  The results showed significant variation geographically. The Northeast, parts of the Midwest, and the coastal enclaves of the West Coast are bastions of liberal/leftist intolerance to those with opposing views. South Carolina, Utah, and swaths of Texas, predominantly conservative, stood out for their narrow-mindedness. Florida and Virginia, classic “purple” states, also show strong strains of prejudice, as can be seen in the map above.

Within Virginia, intolerance was pervasive across most the state. The only pockets of relative forbearance were located in non-metropolitan counties in Southside, Southwest, and along the Chesapeake Bay.

The study does not paint a positive picture of Virginia (unless you really, really hate the other guys and believe that intolerance in the pursuit of virtue is no vice). But the methodology is open to question. It is not based on direct polling data of Americans on a county-by-county level. PredictWise polled 2,000 Americans nationally to capture peoples’ feelings about other people. How would they feel if a close family member married a Republican or Democrat? How well did they think the terms selfish, compassionate, or patriotic describe the other guys? Then the firm extrapolated findings with age, race, urbanicity and partisan loyalty to each county based on its demographic characteristics. (Gender was the main demographic factor that did not correlate with intolerance.)

I don’t know much about statistics, but I believe it should be possible for PredictWise to calculate (within a margin of error) how much each of its demographic variables account for the variation in political intolerance. Do they explain 50% of the variability? 90%? If they explain only half, could geographic-specific factors account for the difference?

The methodology makes no effort trying to determine if tolerance might vary with the peculiarities of regional culture, history, media influence, or other localized factors. It assumes that the demographic patterns (age, education, etc.) apply uniformly across the board. And the results are a bit strange — high degrees of intolerance coinciding strongly with state borders. Thus Virginia, South Carolina, and Florida are intolerant, while North Carolina, Georgia and Alabama are tolerant. Does that pattern accurately reflect reality?

Despite those caveats, The Atlantic findings do ring true, at least in part:

In general, the most politically intolerant Americans, according to the analysis, tend to be whiter, more highly educated, older, more urban, and more partisan themselves. This finding aligns in some ways with previous research by the University of Pennsylvania professor Diana Mutz, who has found that white, highly educated people are relatively isolated from political diversity. They don’t routinely talk with people who disagree with them; this isolation makes it easier for them to caricature their ideological opponents.

The phenomenon certainly describes the myopia of media elites in New York and Washington. They live in liberal/leftist monocultures epitomized by the famous (but apocryphal) Pauline Kael quote, “I can’t believe Nixon won. I don’t know anyone who voted for him.” There is no one more smugly arrogant than a highly educated white person — Bacon’s Rebellion readers excepted — who considers himself very informed and well read and views with the contempt the ignorant views of the great unwashed in the other political party.

The Atlantic’s findings provide interesting context to poll results in which Virginia blacks appear to be more forgiving of Governor Ralph Northam’s 35-year-old blackface transgression than whites, as measured by their belief that he should step down from office. One would think that blacks, who are said to find blackface highly offensive, would be more likely than whites to demand his resignation. To the contrary, Virginia whites are more likely to wax indignant and say the governor should go.

This particular instance may be anecdotal, but it’s a vivid anecdote. I think the Atlantic’s intolerance map may reflect reality in Virginia. In my experience, the intensity of intolerance and self-righteousness has ratcheted up tremendously in the past few years. People get angrier at people on the other side of the ideological fence than they used to. I have seen old friendships break up over politics. And the situation is getting worse: The more polarized people get, and the more they seek confirmation of their biases from those around them, and the more they shun those with views they find offensive, the more blinkered they get in their thinking and the more intolerant they become.

This is an ugly dynamic. Where it stops, nobody knows.