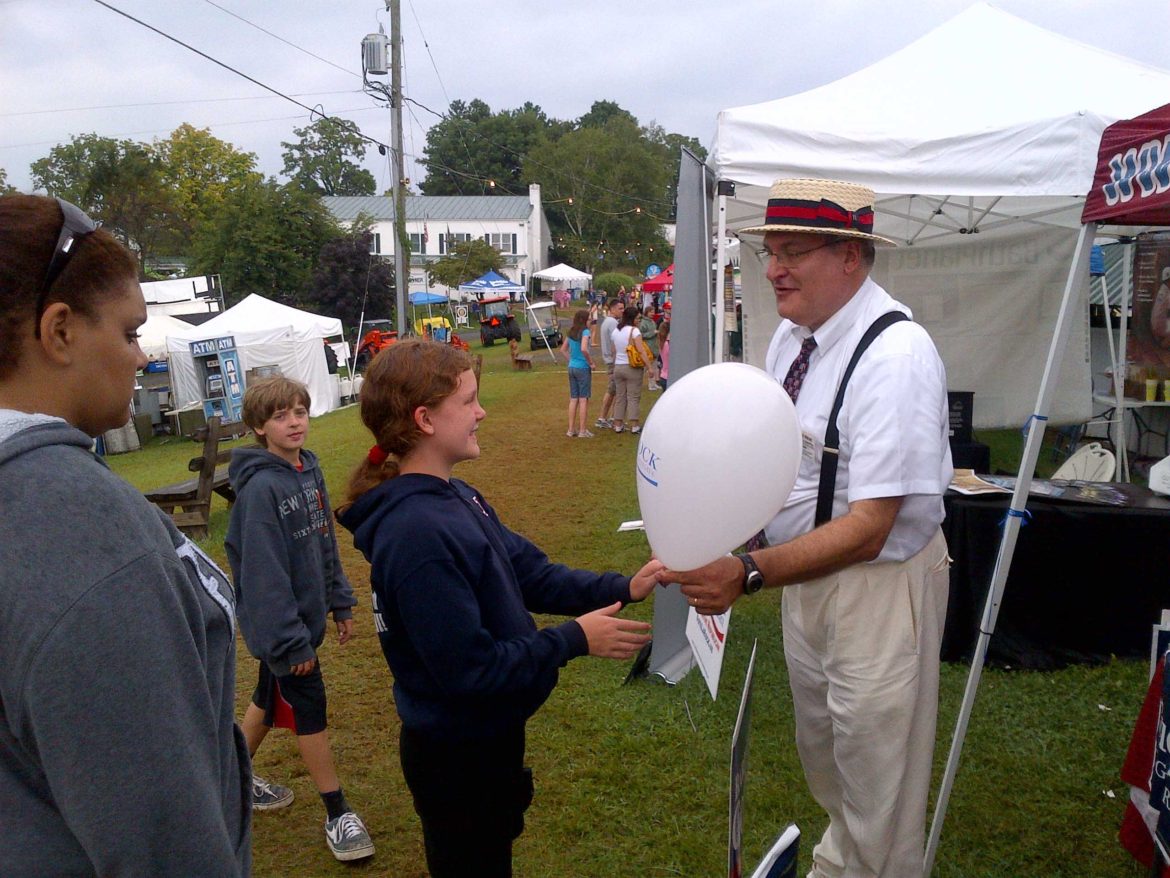 The author distributing balloons for Del. David Larock in 2013 at the Loudoun County Fair. If released into the air, starting today, fines of $25 per balloon could be assessed

$25 fine for each balloon released is now law, thanks to Democrat Nancy Guy

Starting today,  July 1, when most state laws take effect, it will be illegal for anyone over the age of 16 to release a “non-biodegradable balloon” or any material  that requires more than five minutes contact with air or water to degrade  into the atmosphere,” or face a $25 fine PER BALLOON.  Adults are liable for the fine if their kids under 16 release the balloon – even by accident.

Apparently, balloon waste washes up on beaches and birds and turtles eat them, according to a study 2013-2020 by Longwood University (Who paid for this one and really, how widespread of a problem is this?)

Most Republicans in the General Assembly voted against it on initial debate, but the liberal media is “blowing” this story out of proportion, as if it’s a major environmental legislative feat.

(Let’s not forget that marijuana is legal in Virginia, as of today, but releasing a balloon in the air will get you fined.)

The Virginian Pilot ran the article page one June 30  with glowing biased reporting, plugging the web sites of the activist groups that pushed for the balloon bill   — preventballoonlitter.org; joyfulsendoff.org and balloonsblow.org – and chief patron Delegate Nancy Guy, a Democrat who defeated longtime GOP Rep. Chris Stolle in Virginia Beach/Norfolk in 2019.

For nearly 10 years, legislators on the hill who tried to ban balloon releases dealt with snarky commentary.

Now, it seems, the unenlightened were full of hot air.

“I had to be willing to take the ribbing even from people I consider my friends,” Guy said. “You would think it would be an easy bill when you fully understand it’s a legalized form of littering.”

Ok, I will do some ribbing and snark.  This law is a lot of “Ballooney” and unenforceable.

How can one fine someone for waste on a beach without seeing them release the balloon in the first place, unless the balloon bears the name of a company, product or maybe a political candidate?  NOTE: I used balloons in my Leesburg campaigns  and distributed them at the Loudoun County Fair (see photo above) and I am sure many were accidentally released.

The legislation is unenforceable unless the anti-balloon groups form squads to spy on outdoor events. (I wonder if they a Leftist-funded, or fronts by businesses that compete against balloons?)  But they have won passage of similar laws in job-killing Nanny State Maryland  — where the fines start at age 13 – plus California and other “blue” states.

Most of Guy’s bills deal with environmental and energy issues, and few have been adopted into law.  She obviously is a waste of flesh in the House of Delegates, and her seat is targeted by the  Republican State Leadership Coalition.

She clearly wants to “suck the air out of the room” from a good party and like many liberals, has an “inflated ego.”

We need to “blow her” out of office this November.  Please support Republican Tim Anderson and visit his web site. https://www.timforva.com/

I have met Tim dozens of times and he is a solid lawyer and not a “blowhard.”

Mamny of the roadside pop up road accident death memorials feature balloons that are not released but are tethered. Does this law apply to them? Are the police going to arrest someone who has lost a child to accidental death because of an errant balloon. What if a balloon isn’t deliberately released but escapes but accidental release when a three year old loses control of the string?

The law is not very long. Perhaps you should read it.

Typically, leftists like you are never happy and want others to be miserable as well.

So true. The Dems have abandoned the center/right and have become socialist and statist and want a Nanny State with loads of laws and regulations to restrict freedoms, make people more miserable and feel more government is the answer. Liberals like Eric the half wit always focus on your words, your tone, style, facts but avoid debating the substance up here because they are flummoxed by the fact conservatives pierce their bullshit so well. Liberals can even be on one side of an issue one day, and then the other side the next day if it suits their agenda and narrative.

Again, you are lamenting your loss of freedom to kill sea turtles… what next, you feeling the urge to club some baby seals… FREEDOM!!

Did you actually read it yet, Doc?

Aw, now see, that really hurts J. I will concede to not being the most sentimental fella. I accepted that it’s your God given Constitutional right to mourn and celebrate by knowingly littering His (or Her **see, I’m already doing better by caring enough to be all-inclusive. Thanks J!) creation. Now, I get to make an assumption about you being a “why can’t we go back to the way it was” kind of lady. (amiright?) Sooooo, how in the world did people manage to mourn, celebrate, etc back in the day, pre-balloon?

Do you think collections of lighted candles were safer?

Hell, if you’re going to light something, go all the way and have a Norse funeral. (Those are also banned by the way. Although Maine was at least considering allowing them). If you’re going to bitch about your rights being taken away and want to celebrate, at least make it something worthwhile like leaving this world on a big ass burning boat.

Thus you make my point and refute yours.

Lmao, I’m sure somewhere in that peanut head of yours there is your definition of “a point” and again, only in your lil peanut, that point was somehow made. Congrats.

Ken chooses the “I want demand my right to kill sea turtles and birds with my garbage” hill to die on. God given and all that jazz…

Bye… “Let’s not forget that marijuana is legal in Virginia, as of today, but balloons are banned.”

Balloons are not banned, Ken. At least attempt to be truthful in your clever rush to score political points.

theyd might as well be if the Democrat Balloon Police are out there ! But ive asked Jeanine to correct that

Oh, it was just a mistake, eh? I guess your imagination just ran away with you, huh? Notice… still there… There are no balloon police either… just can’t help yourself, can you Ken. Answer this… why should anyone take anything you say or write seriously?

Marijuana will lead to more human deaths than balloons. But that is what you leftists want – more dead people to save the planet.

“ how widespread of a problem is this?”

Just like anything though, you’d have to care. Maybe, just maybe that whole be a good steward thing could be applied at some point. But I know, I know, it’s you’re God given right to litter and hell with anything that doesn’t directly impact you so screw that stewardship crap.

I care about the parents who have lost a child and release balloons in their child’s favorite color on their birthday. Once a year. They deserve all the comfort they can find. It’s a small price to pay.

Yes, you do seem to have the attitude that if it doesn’t affect you, who cares?

No one is banning balloons. What is banned is RELEASING NON-BIODEGRADABLE BALLOONS.

i said that. how do the police enforce the law and the $25 fine?

The are going to check for little kid birthday parties and raid the place. Of course, they could go to dollar tree and hand out tickets as people buy unapproved balloons.

They are probably preparing their legal challenge now claiming it violates their religious beliefs not to pollute.

As usual, you have it completely wrong.

Well… I think I pretty much nailed it.