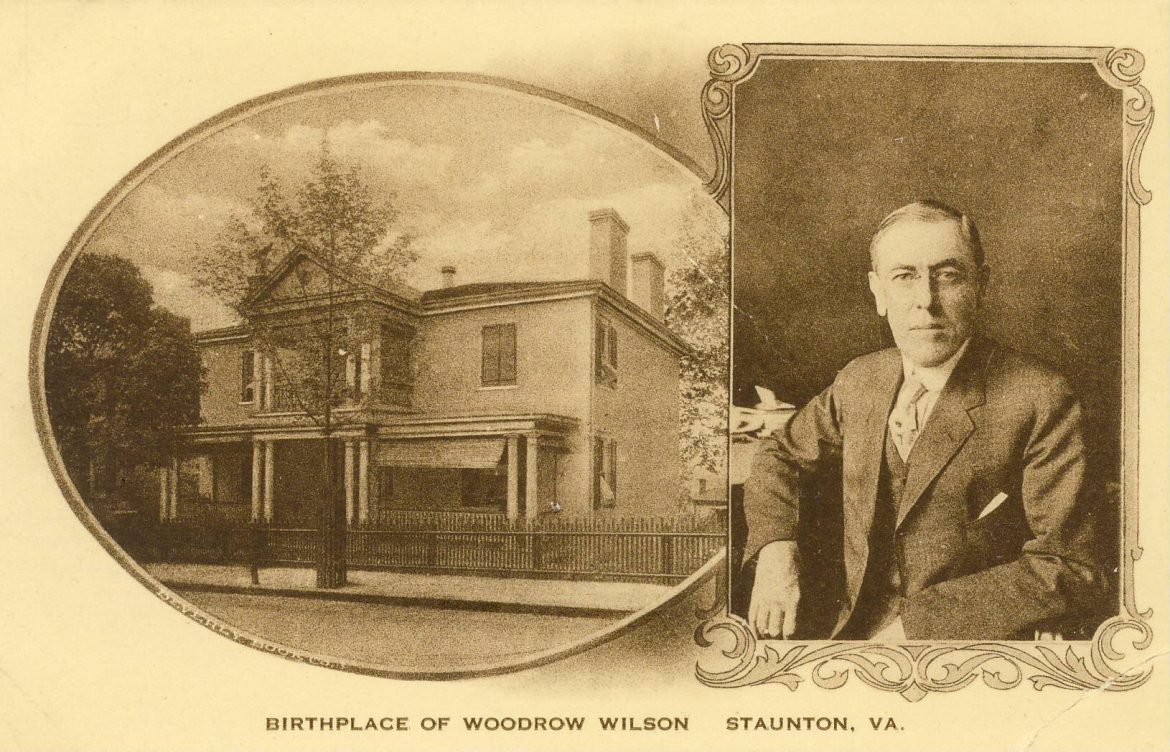 I grew up in Princeton, NJ, in the 1960s and 70s when we school kids learned to be proud of the fact our town was where Thomas Woodrow Wilson, 28th president of the United States, 34th governor of New Jersey,  alumnus and president of Princeton University, and native of Staunton, VA, made his start.

His home still stands and is marked with a plaque.

But the trustees of Princeton just voted to take the Democrat’s name off the Woodrow Wilson School of International Affairs due to his  “racist thinking and policies [which] make him an inappropriate namesake for a school or college.”

For several years, even before the current wave of monument iconoclasm, campus activists have wanted to remove Wilson’s name from many things at Princeton due to his segregationist polices that kept blacks out of the Civil Service –and more.

The Princeton University Board of Trustees  also accelerated the retirement of the name of a soon-to-be-closed residential college, changing the name from Wilson College to “First College.” However, the Board did not change the name of the university’s highest honor for an undergraduate alumnus or alumna, The Woodrow Wilson Award, because it is the result of a gift. The Board stated that when the university accepted that gift, it took on a legal obligation to name the prize for Wilson.

I guess when it comes to money, Left leaning ‘woke’ schools like Princeton bend the rules.

But it doesn’t end there.  Just do a Google search on “Woodrow Wilson renaming” and you will find that Mayor Muriel Bowser in DC wants to rename Wilson High School in Northwest DC;  Monmouth College in New Jersey is renaming Woodrow Wilson Hall;  elementary schools in New Brunswick NJ, Framingham, MA, and Kannapolis, NC;  and even Woodrow Wilson drive in Los Angeles and the I-495 Wilson Bridge between Maryland and Virginia (perhaps after Sojourner Truth).

So far, I have seen nothing about abolishing or renaming the Woodrow Wilson Museum in Staunton where “Woody” was born and spent the first two years of his childhood  His presidential limousine is there and boyhood home is available to be toured.  It was closed in April when I visited it with my daughter, Lara, just to see it.

Without a doubt, revisionists on the Left and the Right have done a number on old Woody the last few years.

“Notwithstanding his accomplishments in office, Wilson has received criticism for his record on race relations and civil liberties, for his interventions in Latin America, and for his failure to win ratification of the Treaty of Versailles.  Sigmund Freud and William Christian Bullitt Jr., an American diplomat, collaborated in the 1930s on a psychological study that was published in 1966. [331] They argued that Wilson resolved his Oedipus complex by becoming highly neurotic, casting his father as God and himself as Christ, the savior of mankind  Historians rejected the interpretation. Diplomatic historian A. J. P. Taylor called it a “disgrace” and asked: “How did anyone ever manage to take Freud seriously?”

“Many conservatives have attacked Wilson for his role in expanding the federal government. In 2018, conservative columnist George Will wrote in  The Washington Post that Theodore Roosevelt and Wilson were the “progenitors of today’s imperial presidency.”

The income tax and Federal Reserve Bank started under his administration via constitutional amendments, and conservatives have not looked kindly on that either.

But conservative revisionism about Wilson is playing no part in the renamings – just our 28th president’s racist views and policies.

“Cancel culture” dictates that even if a president or Confederate general did something good, his or her name must be blotted out like we Jews do with Amalek (who viciously attacked Moses and the Israelites).

We forget that Wilson was an important leader, who not only ” remade Princeton, converting it from a sleepy college into a great research university,” as an article in the “Princetonian” noted,  but also was a reform Governor of New Jersey who cleaned up a LOT of corruption.

A variety of polls and surveys over the decade ranks him as one of the nation’s best presidents.

We can debate all day whether the U.S. should have intervened in World War I, and no doubt, Wilson was very naïve about European power politics at Versaillse. The U.S. never joined the League of Nations, which was his idea, until Roosevelt, but I personally believe it was very bad for the U.S. to retreat into isolationism after Wilson left the White House.   I firmly believe that had the U.S. been more involved in world affairs, as Wilson wanted, it may have obviated the rise of fascism, World War II, the Holocaust and subsequent spread of communism around the globe.

His views of blacks, Jews, and other immigrants are reprehensible by modern standards, but to take his name off anything is an abomination and will do nothing to advance race relations or help the persistent problems of the black underclass in this nation.

Same goes with renaming Army posts, streets or buildings – or Washington & Lee University,:  as reported on TBE here  No amount of renaming and shaming is going to move the ball for black Americans; if anything it will just polarize people more and encourage a huge number of non-blacks to disengage from the dialog altogether.

“Cancel culture” is a cancer on the U.S. and must be stopped and it is a true shame several GOP administrations have done little to stop it on the campuses (like Princeton) where it germinated.