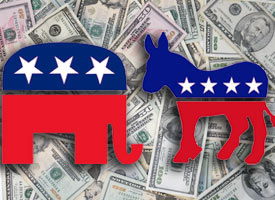 The disparity in cash is even greater in the House of Delegates, which is two-thirds Republican. House Speaker William J. Howell has direct control over $1.4 million spread out over three different campaign committee accounts. By contrast, Democratic Minority Leader David J. Toscano and the House Democratic Caucus have $371,000 on hand. And several of Howell’s top deputies have robust campaign accounts well into the six figures that can be spread around to competitive races.

Republicans hold the state senate by just one vote. It is expected that Democrats, including the Governor, will be putting money into every senate race that has a chance of being competitive with the hope of taking back the senate. Â Our Senator Dick Black is one of their targets so we must do all we can to help his campaign.

Hopefully this doesn’t discourage people from giving. We are going to need every penny to keep control in the House and Senate, take back the governorship, and #TurnVARed for Election 2016!

Obviously people AREN’T discouraged from giving. They are just being judicious about exactly who they are giving it to.

It’s amazing! In Virginia all these corporations have become animated like so may Frankensteins, acquired political opinions, and are now even trying to register to vote.

Yes, amazing it is.

You see Corprations do not need a photo ID to vote on Election Day at the polls.

No, corporations can vote anywhere, everyday of the year.

You see, corporations vote via lobbyists with Checkbooks.

You miss the point of my sarcasm. Corporations are no more than real people who formally band together to pursue common interests, which may be commercial, cultural, policy-oriented, or any combination thereof.

You can be bitter that you are not the only voter in the district and therefore elected officials and candidates do not do what you personally want of them.

Or you can try to band together with enough like-minded people to make a difference in both voting power and the communication and organizational capabilities that cost money.

Or you can support socialized campaign finance.

Only one respects the freedom of speech, freedom of association, and republican form of government memorialized in our Constitution. Do you choose that one?

Not sure how you come to those conclusions regarding the Republican Party?

” Corporations are no more than real people who formally band together to pursue common interests, which may be commercial, cultural, policy-oriented,”

Would this be called a Union? An anti-labor Union? Isn’t greed their common interest? Purchasing our elected officials as if they are a loaf of cheap bread?

Were there not about a half-dozen Republican’s who introduced bills in this year’s GA in Virginia calling for a COS to change our Constitution? No Democrats introduced any such legislation.

“Only one respects the freedom of speech”.

You talk about freedom of speech? Why do you post in a blog, BD, where freedom of speech is not allowed unless you agree with their beliefs, in spite of the truth? Isn’t BD a Republican blog? A private union?

In spit of no profanity, and backing up what I write with links, I am banned for pointing out the truth? Effectively I might add, very effectively.

They sure have done a great job of raising billions for Nobama and corporate whores The Clintons!

In other words, in Virgina elective office is purchased, like at an auction? Getting elected has nothing to do will qualifications, how well you did I the past in office? All depends on who has the most cash?

Something like that. Government has become so important in our lives, at every level, that people put a lot of money into electing the right people so (in the case of Democrats) the government can become even more intrusive in our lives. It’s important to Republicans to elect people who will leave us alone and get the heck out of our lives and our toilets.

Worked for Nobama, The Clintons and Slick Terry.
Did you vote for any of them?

“In other words, in Virgina elective office is purchased, like at an
auction? Getting elected has nothing to do will qualifications, how well
you did I the past in office? All depends on who has the most cash?”

I can honestly say that I voted for the most fiscally Conservative in all those elections.

Wow – this is great news for the GOP! I have a suspicion that the Democrats are counting their eggs before they hatch with McAuliffe. McAuliffe doesn’t care about Virginia or who controls the House and Senate. He only cares about Hillary. If Virginia wasn’t a swing state, he would have never bothered to run for governor here.

Yes, the Governor does appear to be very Hillary focused. http://www.richmond.com/news/virginia/government-politics/article_feb25cf3-bfab-5c4e-b9e2-1effa38fc7a5.html