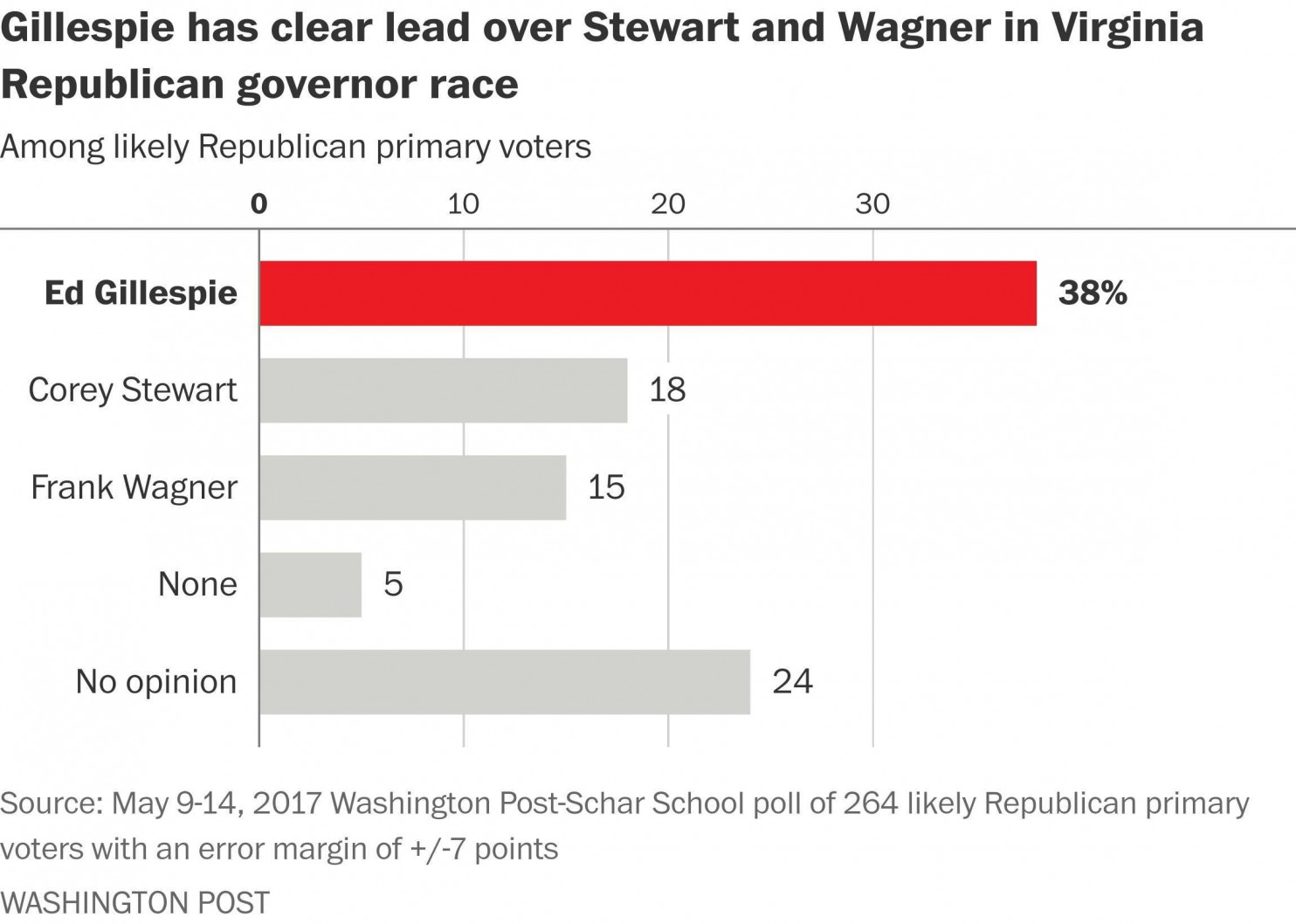 Even more interesting are the results when Republicans were asked which candidate has the best chance of winning in November. Â Ed Gillespie was chosen by 60% of Republicans, Frank Wagner was second with 9% and Corey Stewart was third with Â 7%. 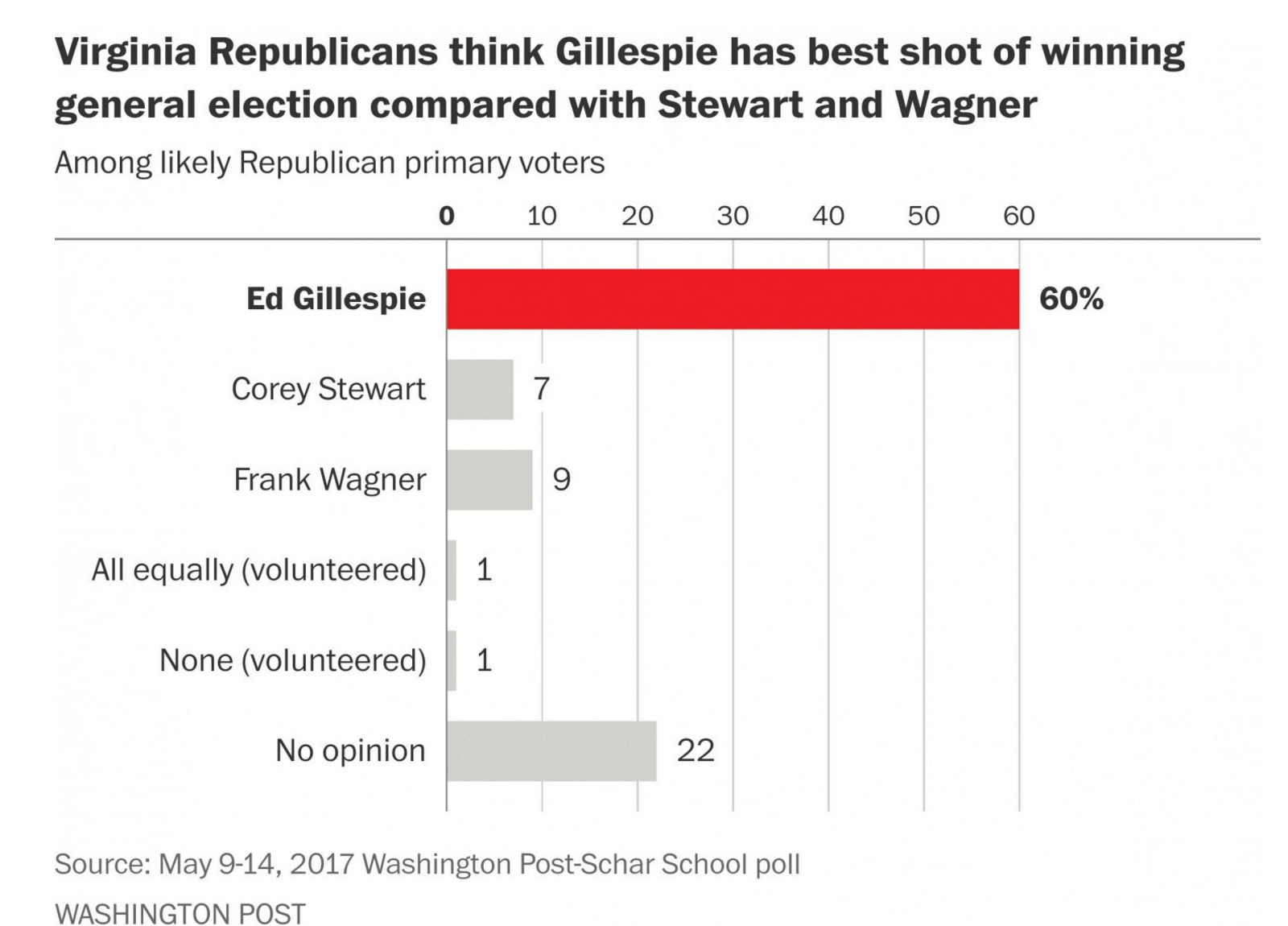 Gillespie is also seen as the best candidate to support Trump. Â He has 37% of Republican voters, while Frank Wagner and Corey Stewart each get 12%.

There is nothing good in this poll for Corey Stewart. Â And the last few days haven’t helped, as we reported here and here.Â

More on this latest poll here.Â

Virginia Republicans say Gillespie has the best chance to win in November–Stewart the least likely to win was last modified: May 16th, 2017 by Jeanine Martin

The Why Bother candidate. That sounds like the best choice for the foreseeable future when everyone seems to be demanding a constitutional crisis. That way there’s no paper trail to directly condemn you to a potentially short life. Political gamesmanship is headed to a whole new level in America.

Trump had the best message by far but nearly torpedoed his campaign with a poor delivery. He won not on his merits in particular but on the promise of change coupled with a very weak opposition. In short, so many of his votes were more anti-Hellery than pro-Trump. Corey’s campaign style seems to mimic Trump’s. It’s not working and he will probably be crushed in the primary – which is a good thing because he would likely perform even more poorly in the general. Perriello, is just as extreme as Stewart but his typical liberal message does not come across as being so harsh because it plays to those who are looking for free stuff from the government. Sadly, he may win because of an anti-Trump backlash. All the more reason to hope like Hell that our president’s programs are successful !

The problem I have with Ed is that for 4 years we Republicans have been angry that Carpetbagger McAwful only landed in Va. because he was a party hack. He did not come here for any other reason than to chair the DNC. Ed came here to chair the RNC. Either could have just as easily bought a property in MD or DC. This was the same argument I made for Cuccinelli whose family had moved to Va when he was a teenager, and he’d gone to school and put down roots in our state other than those instructed by the party.

Those polls are a testament to how bad our choices are…yet again.

Ed the lobbyist is going to lose to Perriello by 5-10 points.

Mr.Ed in LU Debate spoke of cutting DPOR Regulations to create jobs.
Which Regulations?
Why?
How many jobs will be netted?
Have you Mr.Ed implemented any of your policies anywhere else in Goverment?
Governor McAuliffe is off to a start in the * right * direction with the implementation of EO24.
How would you Mr. Ed address EO24?
no answer, just the sound of crickets, or do you have to check with someone?
If you are not capable or lack the testicular fortitude to address illegal employers/employment then we must
elect Corey Stewart in June because Ed is not up to speed on fraud and executive actions.

Can’t see Wagner getting the nomination, saying you need to raise gas taxes when families are already strapped financially, for roads which will never be built or widened (see Rt. 15 in Loudoun) is a loser. Corey had a legitimate chance to win, but wrapping hisself in the Stars and Bars over and over and over again does not endear him to the average Virginian.

Ed will win in June, and likely it will be convincing.

#NeverTrump Gillespie is the one most likely to support Trump”? Balderdash!

Yeah, all the polls had Hildabeast winning up unti Nov 9th too. And remember earlier when the GOP leadership assured us only Jeb! (please clap) Bush could win against Hillary?

Trump is a populist and so is Corey.

Most Virginians voted for Hillary, I don’t see how being an unpopular populist is going to help Corey.

A presidential election brings out a different mix of voters.

The statement is the Gillespie has the best chance of winning in November.

Instead of just throwing unsupported, anecdotal crap, care to expound upon where exactly you predict that Mr. Stewart, if by some chance he carries the Republican nomination, will make up the difference that has already been seen in the voting electorate?

Who is coming to the polls in November to vote for Mr. Stewart that A. didn’t vote for Mr. Trump or B. didn’t vote at all bc he has to find them or he doesn’t win. Unless you are predicting that Democrats will not vote in large enough numbers compared to Republicans to swing the election.

Unfortunately the nomination process this year is not exclusive. Republican votes for our nominees will be once again diluted.

But this time the democrats also have a primary and they can’t choose both ballots.

I won’t be voting for anyone who supported TARP. Sorry, that’s just how I roll.

I wonder if you can go vote and just not select anyone and record it as voting for nobody and leaving.

I wrote in Commissioner Carlton Ray Davenport on Senator Newman’s last ticket , he has done more to protect legal employers and employees from illegal commerce than the longest serving Va. Senator Steve Newman has , and in particular the 23rd.
I bet the Honorable Senator is clueless, nice guy though.
He is a good man.
Corey Stewart for Governor
the candidate votes buy not money $$$$$$
http://watchdog.org/202012/subcontractors-shadow-economy

You could vote for the Libertarian candidate, who’s website is still under construction and has a grand total of 18 twitter followers:
https://twitter.com/CliffHyra

I’m glad to see that the LP-VA is on top of things as always.