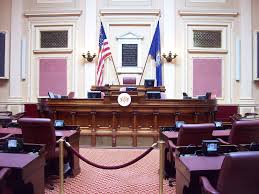 Currently Republicans hold the Virginia House of Delegates by 2 to 1. Republicans have no such hold on the Virginia Senate where they hold 21 seats and the Democrats have 19. Democrats are hopeful that they can take back control of the Senate in November. [read_more] Their first target is the seat being vacated by the retirement of Sen. John Watkins, R-Powhatan.  The district has voted democrat over the last few years.

Democrats will also challenge Frank Wagner, R-Virginia Beach and the seat being vacated by Jeff McWaters, another Virginia Beach Republican.

Republicans are also eyeing several senate seats, including one in Prince William County being vacated by the longest serving senator, Democrat Chuck Colgan. Republicans hope to pick up the seat held by Lynwood Lewis,D-Accomack. Lewis won in a special election in 2013 by a mere 11 votes. The last democrat Senator in southwest Virginia, Sen. John S. Edwards, D-Roanoke, might also be vulnerable. His district is mixed, with Roanoke county being more conservative while the city is more liberal.

“The only seat of ours we view as truly competitive is the 10th District,”

Frankly, I believe Virginia voters are becoming increasingly savvy regarding the fact that simple political party headcount or association in either the Senate or General Assembly accounts for little consequence in solving the problems in their daily lives, especially among the Republicans when adherence to the tenets of the party’s self proclaimed creed is largely ignored and treated as meaningless jargon in today’s Richmond political arena. If Republican’s maintain, as many do, that the only viable option to win elective office in any contested Democratic region is to run on agreement of many of the same issues with their opponent and distinguish themselves with nuance rather then substance is there really much to engage the potential voter to even give them them a second look? When you homogenize to completely you end up standing for nothing in the voter’s eye so why switch my Democratic vote predisposition. The trend lines aren’t looking good for new seat acquisition in my opinion.

Reply
Virginia Democrats Really Want The Senate Back | Virginia Virtucon March 10, 2015 at 7:57 am

[…] The Bull Elephant gets the conversation started: […]