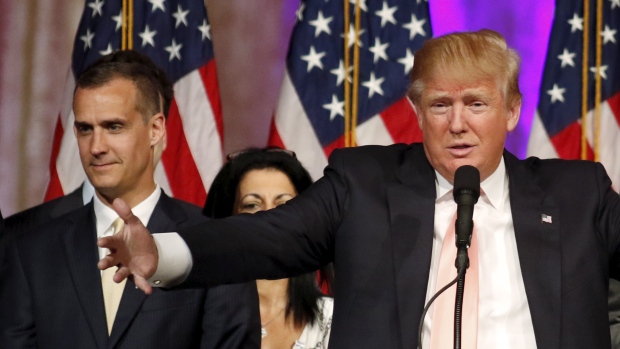 Corey Lewandowski did a tremendous job in helping to secure the 2016 GOP Presidential nomination for Mr. Trump. Amassing over 14 million GOP primary votes and setting records for campaign efficiency against the the most powerful Republican field in memory, Mr. Trump’s election performance to date is unprecedented.

Corey is a historic, campaign transformational figure in American politics. He will never be forgotten by many of his friends who embraced his vision.

The Trump general election campaign is evolving and it’s going in a great direction.

Our extraordinary, consequential movement will endure and prosper beyond internal personnel adjustments.

I am more confident than ever of victory in November in both Virginia and nationally.

Mr. Trump’s vision for America First is sweeping the nation and awakening a forgotten middle class.

This is one campaign the D.C. consultant class or media elitists will not dictate.

The people will prevail.

I guess you have to put a happy face on it, but anyone who thinks that the Trump campaign is doing well is delusional. Trump continues to talk trash, only to have to come back later and say that either he didn’t mean it or didn’t say it. Trump’s biggest advantage is a Democrat candidate who is extremely unpopular as well.