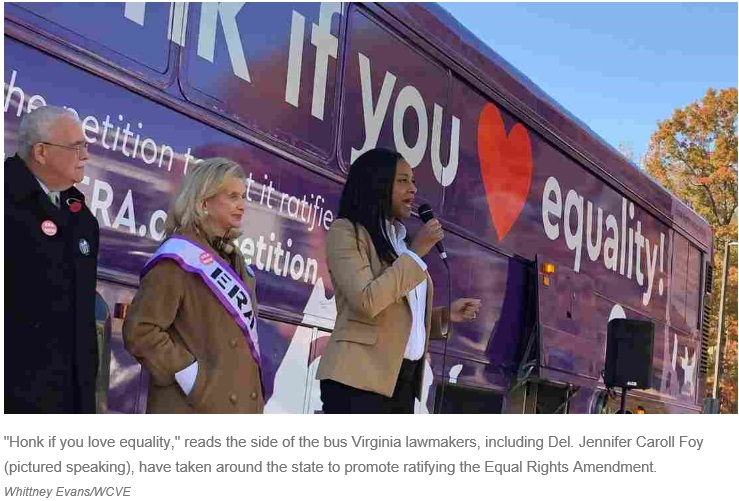 written by Dave Webster November 21, 2018
The deadline for the passage of the Equal Rights Amendment expired in 1982.  Despite this, for ten days in November Virginia legislators traveled throughout the Commonwealth in their ERA bus proclaiming that if Virginia votes in favor of the Amendment it will be passed as Virginia would be the 38th state to ratify it.  The supporters of the ERA claim that Congress is not empowered to set deadlines under Article V of the US Constitution or that Congress could retroactively extend the 1982 deadline thus resurrecting the Amendment.

Unfortunately for the wishful thinkers, the Supreme Court has directly ruled on this matter and stated that Congress may set deadlines for amendments.  In the case of Coleman v. Miller (1939), the Supreme Court ruled that: “We have held that the Congress in proposing an amendment may fix a reasonable time for ratification. Dillon v. Gloss, 256 U.S. 368, 41 S.Ct. 510, 65 L.Ed. 994. There we sustained the action of the Congress in providing in the proposed Eighteenth Amendment that it should be inoperative unless ratified within seven years.

With regard to the retroactive extension of the deadline, ERA supporters argue that Congress extended the original deadline from 1979 to 1982, so Congress could do so again.  They overlook the fact that a federal district court ruled in Idaho v. Freeman (1981) that Congress had no power to extend ERA’s ratification deadline because the extension had been passed by a simple majority and not the 2/3 majority required for a Constitutional amendment.   So even the legality of that extension is in doubt.

In addition, four states rescinded their ratification of the ERA prior to the original deadline of 1979.  The court in Idaho v. Freeman (1981) upheld those rescissions:  “Until the technical three-fourths has been reached, a rescission of a prior ratification is clearly a proper exercise of a state’s power granted by the article V phrase ‘when ratified’ especially when that act would give a truer picture of local sentiment regarding the proposed amendment.”   This case was appealed to the Supreme Court but the case was dismissed as moot after the 1982 deadline expired.

Members of Congress have also acknowledged the ERA is a dead letter. ERA supporters in Congress have reintroduced it on several occasions (most recently in January 2017), thereby conceding that the Amendment process must proceed anew and that the expired ERA cannot be revived.

The push to vote for the ERA is just another example of wishcasting that we often see in politics.
Virginia Wasting Its Time On ERA Vote was last modified: November 21st, 2018 by Dave Webster