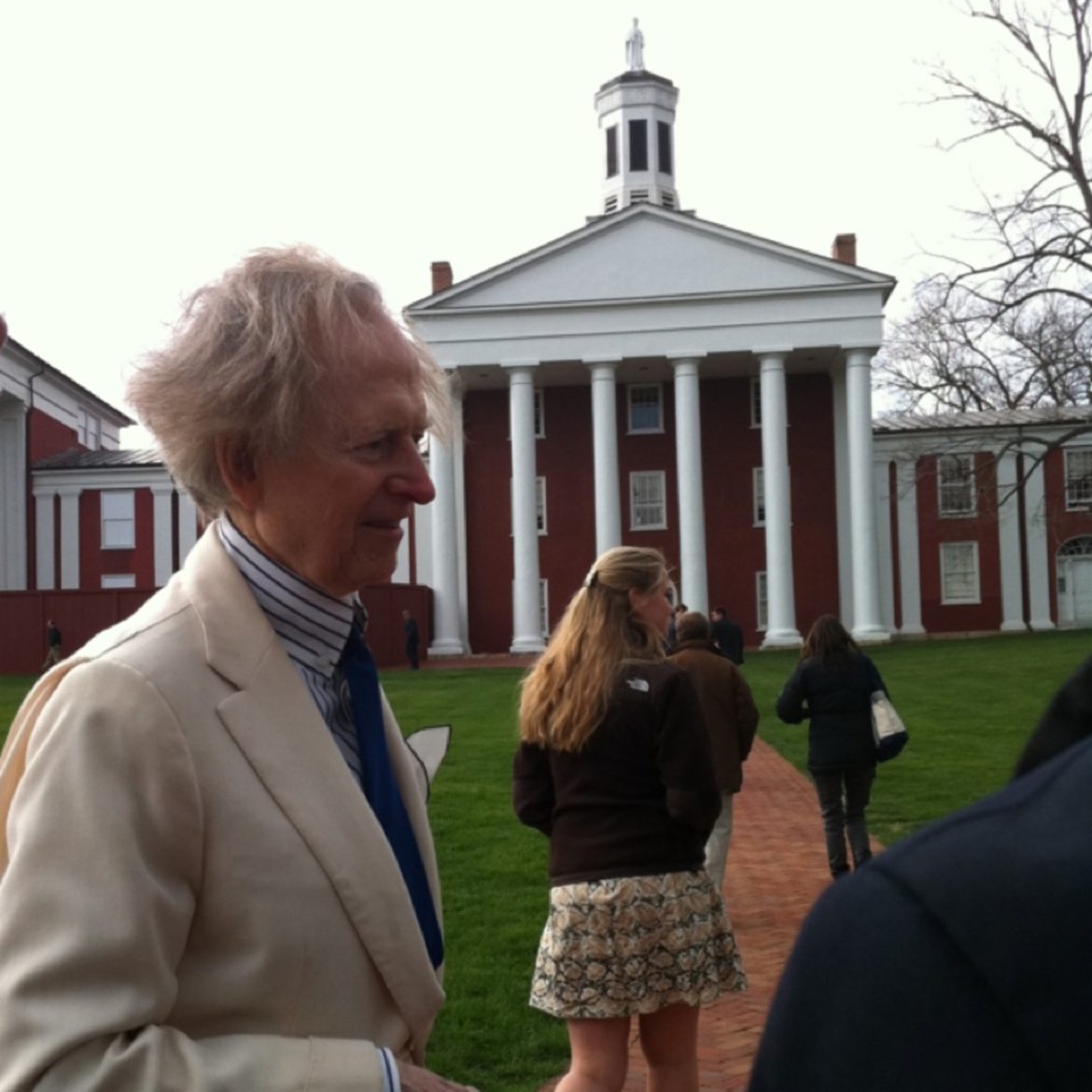 Tom Wolfe — born and raised in Virginia, alumnus of Washington & Lee in Lexington — died in New York this week, his home for most of his life, at the very good proud age of 88, leaving behind a wife, who writes for liberal harpers, and two older children.

He is best known for his books “The Right Stuff,” about the early days of the space program, and Bonfire of the Vanities, about 1980s New York Wall street greed culture, and wearing  white Southern gentleman suits, hats and white bucks

Nobody could spot the political, economic and social impact of trends like Tom Wolfe.  For me, becoming a journalist in the 1970s, his books were required reading, as this was the era when journalism wanted to be more “story telling” and not just bogged down in facts.

“Bonfire” and “Right Stuff” were made into blockbuster movies.  Few of his other great books and articles were.  So, a goodly number of post-Baby Boomers may never have enjoyed “The Kandy-Colored Tangerine-Flake Streamlined Baby” (about Southern California car culture) “The Electric Kool-Aid Acid Test” (about drug culture and Ken Kesey and his Merry Pranksters) and “The Pump House Gang,” a wonderful short story about Southern California teenage surf culture in the 1960s.

A number of his humorous Wolfisms are permanently etched in my brain.

In the interest of full disclosure, I have used the “nose that can slice roast beef” to describe many a WASPs (please forgive me).

His critique of 20th century suburban architecture in “From Bauhaus to Our House” was not a big seller, but for me, it was my first skeptical entrée to the perils of heavy handed planning and zoning – something I dealt with regularly as an elected official in Loudoun from 2006 to 2017.

But most important about Wolfe is he was a conservative and skeptic of Leftism,  though you will find no mention of that in the extensive New York Times obituary on his fascinating life.

“Radical Chic” is all about the welfare state and the elitist liberals who enable it;  “Mauve Gloves” about the growing number of self-absorbed people of the 1970s;  “Bauhaus” about zoning, and “Bonfire” is not just about 1980s Wall Street excesses.  It has a black activist character patterned after loudmouth Al Sharpton, and the book does him no favors.

I watched Wolfe do a lecture where he termed Nicaraguan Sandinista leader, Daniel Ortega, a “Woody Allen like character.”  Ortega has actually been back in power in 7 Nicaragua since 2007  if you were unaware.

He acknowledged voting for George W. Bush in the 2004 election and would not be surprised if he voted Republican most of the time. Tough to do living in New York.

The hallmark of New Journalism was to write news stories using prose found most often in fiction.  The idea was to not bog the reader down with too many facts and for the author to provide his and her perspective.

This had its good points, in that it revolutionized print journalism, making it more lively and readable, thus keeping newspapers and magazines alive in the TV age.

However, New Journalism also had its downside – it led a number of writers to put aside facts for fiction, such as the 1981 “Jimmie’s World” series in the Washington Post, which won a Pulitzer- only to be revoked when it turned out the story (about a supposed 8-year-old heroin addict) was fabricated.

I remember my shock in 1985 when I heard a Miami Herald feature writer, who was held up as a model of making journalism more readable, respond to a question that “of course, we have to have some facts” in our stories.  The room of reporters was aghast at the comment.

The recent fabrication in Rolling Stone about fraternity rape at UVA is another example of the abuse of New Journalism.

So, from a negative standpoint, New Journalism may have been the forerunner of today’s “fake news,”  both Liberal and Conservative.

But overall, Tom Wolfe made a magnificent contribution to literature and our means of spotting emerging social trends and how they impact our society – -politically, economically and spiritually.  His books are a must read, especially us conservatives, as he was no doubt, one of us.

May God rest his soul and hope Virginia honors him with a statue – in a white Southern gentlemen suit, of course.

God Rest? I doubt it, Tom Wolfe was a devout atheist.

I can still wish him God rest 😉

Well written. Thanks for it. Rises above the rest here. Great that you see through the veneer and capture the man. He was deep, detailed, a beacon.

Hope it offers some respite from the 6th District stuff. We will have days of 6th district articles on TBE, i am sure. Glad I am not going to that convention