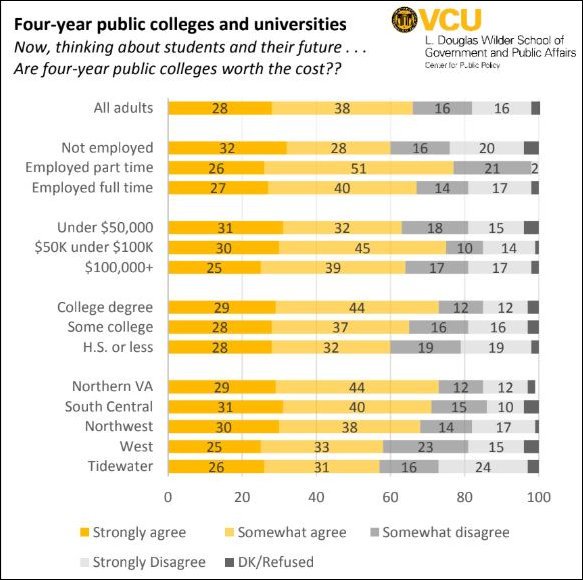 A broad majority of Virginians — 80% — believe that the state’s community colleges are “worth the cost,” according to a poll recently published by the Virginia Commonwealth University’s L. Douglas Wilder School of Government and Public Affairs. Sixty-six percent answered that four-year public colleges are worth the cost. But a bare plurality — 49% compared to 48% who disagreed — responded that private four-year colleges and universities were worth the money.

Ironically, community colleges are experiencing the worst erosion in enrollment of the three categories of higher education as prospective students decide they would rather take jobs in a booming economy than undergo training to get jobs.

In a double irony, Virginians who made the most money (more than $100,000) and had the highest level of education (a college degree) were significantly more likely to believe that community colleges were worth the money than Virginians with high school educations or less, or those making less than $50,000.

The poll, a random sample of 802 adults in Virginia conducted by landline and cell telephone from July 10-30, has a margin of error of 3.49 percentage points.

An implication of the poll is that Virginians are attuned to the cost of higher education. Consumers look most favorably upon community college, the least expensive of the three categories. Most also look favorably upon public colleges and universities, which are heavily subsidized by the state, though by a smaller margin. Virginians are most likely to be skeptical of the value proposition offered by private colleges, where the cost of attendance is highest on average (although most institutions discount tuition based on financial need).

Another implication of the poll is that private four-year colleges, most of which are liberal arts institutions, have a significant image problem to overcome. A quarter of Virginians (24%) responded that they “strongly disagree” with the proposition that private four-year colleges are worth the cost, while another quarter (24%) somewhat disagreed. Shrinking enrollment is threatening the viability of many small, liberal arts institutions. A hypothesis worth testing is that a significant share of the higher-ed market is shifting from higher-cost private colleges to lower-cost public colleges — thus throwing a lifeline to public colleges which otherwise might have been pricing themselves out of the market.

Finally, it is worth noting that among all the demographic variables collected by the pollsters — including age, employment status, race, education level, and geographic region — the most telling was party affiliation. While 79% of Democrats said that colleges and universities in Virginia are “doing a good job” in providing workforce skills, only 58% of Republicans and 51% of independents believed the same. Conversely, 40% of Republicans thought they were “doing a bad job,” while only 15% of Democrats believed the same.

In future polling, the Wilder School might explore this divide. Has the perception of politically correct thinking and ideological hostility to conservatives in higher ed soured Republicans on higher education generally? Has the animus generated by the campus culture wars spilled over to Republicans’ appraisals of the value of higher education? One would think that administrators would want to know whether or not they are alienating a third of their potential market.

Virginians Like their Colleges, But… was last modified: August 26th, 2018 by Guest Contributor James Bacon

Virginia state schools are a very good bargain, but it depends on the major and thats where the state legislature (as long as it’s in republican control) must get a grip on the social justice B.S. and other B.S. majors at the state colleges, and other state legislatures should do the same. And, Virginia schools like UVA and W&M still accept only 66 percent of students from Virginia, claiming they have to take more out of state to ensure they can survive. well, the best way to survive is end the BS programs and majors or make parents pay full rate. Richmodn needs to convene a review of state higher ed programs and figure out which majors are bull and which are not. and then channel the resources appropriately. Even journalism, which is a practical major, is training kids for jobs that don’t exist vs. training them in tech writing, proposal writing and software documentation which is in huge demand. And, the Trump admin needs to step in, too, and put some restrictions on student loans and grants for academic research (especially in the social sciences) if free speech and balance is not present in the classroom. Each student gets a code of conduct and that code should include respecting All opinions.

In discussion with parents and young folks approaching college, there is considerable concern about the cost and the value. It is not unusual for me to hear discussion of alternatives – join the military, enroll in community college, and work for a few years is not unusual. (The colleges and universities have managed to create a situation where they have undermined their own cause for existing.)

i add that all of the SJW violence and constant professorial demands for students to spout political correctness makes a lot of classes useless and even dangerous to any kid who wants a good job upon graduation. (GPA is affected by professors if they just don’t like that you are a conservative.)

A previous article by Dr. Warren points out a very disturbing trend at the College of William & Mary. Every entering student will be indoctrinated into some aspect of social justice, and every parent or student will be paying for this. Certain schools, Univ of Missouri and Evergreen College have experienced a great decline in enrollment because of the excesses of the social justice ideology.

So, if you are going to send your precious child to college today, best you look into what they are going to be forced to experience. And forced is the correct word because freedom of speech and association is definitely under attack.

Most young people are better served by avoiding the expense and lost income of college. A college degree is only an absolute requirement for a fairly limited number of fields.

Absolutely correct. The scientific and engineering fields are professions.