Unity then inspires hope now that our nation can still come together.

Below is a collection of statements, Tweets, press releases, and Facebook posts from Virginia’s Congressional delegation regarding the anniversary of 9/11. The vast majority, both Republican and Democrat, share universal sentiments reminding us of the unity we felt after that horrible day…a unity that continues to inspire hope that our divisions as a nation are capable of healing.

Here’s what Democrat Sen. Tim Kaine had to say earlier, via Facebook:


Commemorating September 11th
Today we commemorate one of the darkest days in our nation’s history. Sixteen years ago, the U.S. came under attack, and nearly 3,000 people lost their lives.

In New York City at the World Trade Center, in a field in Pennsylvania, and up the road in Virginia at our Pentagon, many lives were lost, but the legacy of that day includes many acts of selflessness and bravery. The American spirit cannot be crushed, even in the most difficult times.

Those who seek to drive us apart will always find that Americans will fight for one another and for our country.

I hope you’ll join me in taking a moment today to pray for the families of those who lost their lives and for the men and women of the United States military and the first responders who work every day to prevent another catastrophic terrorist attack.

WASHINGTON, D.C. – Today marks the 16th anniversary of the deadly attacks that left thousands dead in the single most devastating terrorist attack on U.S. soil in the nation’s history.

Considering today’s significance, Fifth District Congressman Tom Garrett offered his respects to the victims and heroes of this day by saying:

“Sixteen years ago, America was tested unlike any time in our nation’s history as we saw firsthand the embodiment of pure evil. As we reflect on the anniversary of September 11, we must remember how our country came together to overcome this tragedy.”

Garrett went on to say, “Today, we are experiencing yet another catastrophe in Florida and Texas that reminds us that the color of our skin or the affiliation of our political parties is not what defines us as Americans, but rather our ability to come together in the darkest of times to prevail as one.”

Garrett is a freshman member of the House Committee on Homeland Security.

Rep. Don Beyer, the Democrat in whose district the 9/11 attack on the Pentagon occurred, has been very active on Twitter today. Here’s a particularly touching example:

From the 9/11 Memorial at the Pentagon. We will always remember and honor their sacrifice, and all that was lost 16 years ago. pic.twitter.com/1NiJBMDJBn

“Sixteen years have passed since the horrors of 9/11, but I clearly remember where I was on that day. It was an ordinary Tuesday in my office until my bookkeeper and Andrew Lewis High School classmate, Terry Haynie, called me into her office, saying she had seen on the news that a plane had hit the North Tower of the World Trade Center. We could not understand how such an accident could happen. Then we saw the second plane hit the South Tower, and knew that it was no accident.

“We can never forget the 3,000 innocent lives lost that day at the World Trade Center, the Pentagon, and on Flight 93. They died simply because they had gone to work or boarded a flight.

“On a day of unimaginable evil, however, many people performed great deeds, even gave their lives, so that others might live. The heroes of that day proved that America will not be broken.

“On this 9/11, let us reflect on the tragedy that unfolded 16 years ago, and let us resolve never to forget.” 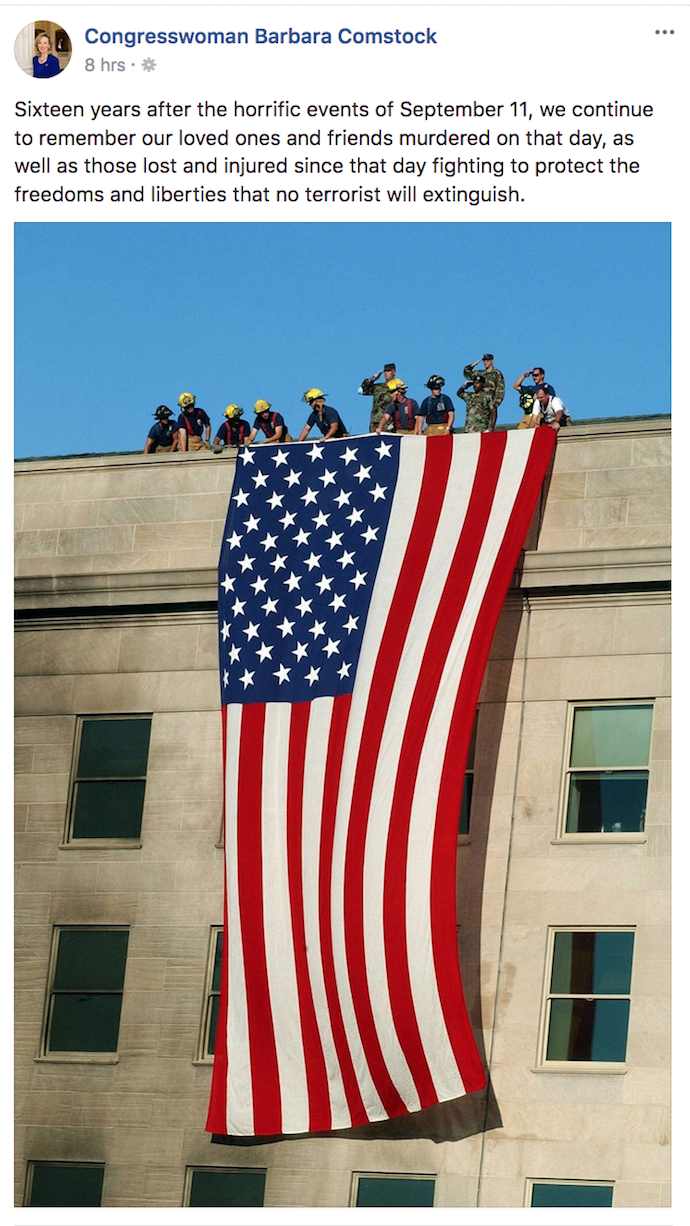 Sixteen F’n years and you are STILL LISTENING TO POLITICIANS?

And now more of our kids and grandkids are going to these shitholes?

What is your specific point of protest on this topic?

Isn’t unity — Garrett’s point — an important goal if there is an agenda to accomplish?

Lots of discussion about 9/11 within my earshot. People do care, and there’s been action, perhaps too much in many ways.