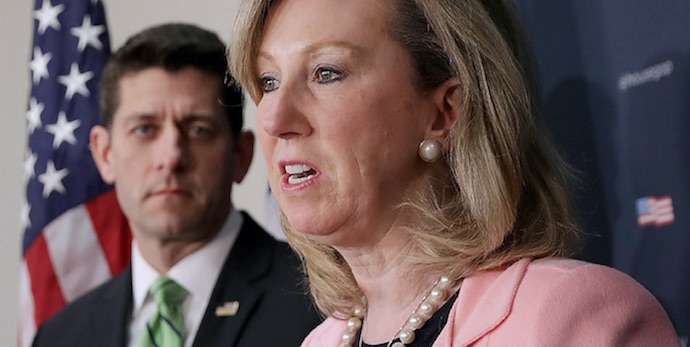 UPDATED, May 4th, how the Virginia delegation voted on AHCA here.

In late 2015, House Republicans voted overwhelmingly to repeal the “Affordable” Care Act of 2010. Most of these lawmakers subsequently used that vote in their campaigns, and promised voters in the intervening election that they would dismantle then-President Obama’s unpopular law

Fast forward to last Monday, when Speaker Paul Ryan and his team, in consultation with the Trump administration, released their much-awaited plan to “repeal and replace Obamacare.” The plan doesn’t literally repeal the ACA, but does undo important parts of it, such as the individual mandate. Other parts, such as a requirement that insurance companies pay for medical care for people who are already sick, remain.

Since then, the Congressional Budget Office released its “score” of the plan, indicating their belief that the plan would shave $300 billion from the federal deficit over 10 years, but at the cost of 24 million fewer people carrying health insurance. This, together with the fact that it is not a full repeal of Obamacare, has caused many conservative lawmakers to balk at supporting the legislation.

Here’s what we can glean from public statements made by Virginia’s Republican delegation to Congress about where they stand on the AHCA:

Rep. Rob Wittman, of the First District, has been with the majority of House Republicans in opposing Obamacare from the start, and in voting for its repeal. On his campaign website, Wittman says, “I believe we need to repeal this law and work immediately to replace it with effective reforms. I voted against Obamacare and have voted to repeal, defund and replace it at every opportunity.”

My Representative Wittman then took the opportunity to keep that promise when on Monday he released a statement indicating in unequivocal language that he intended to vote against the AHCA.

However, Wittman’s announcement that he doesn’t support the AHCA came as a result of the CBO scoring that showed so many people not being insured as a result of the bill…not necessarily because it didn’t go far enough in repealing Obamacare. Indeed, last month Wittman stated a willingness to consider just tweaking the bill (emphasis mine):

“I am conducting a health care listening tour where I meet with health care providers…Their input will be instrumental as we work to repeal the flawed portions of the ACA and replace it with patient-provider centered reforms that will improve our healthcare system for you and your family.
…
We must now set out to fix the parts of the ACA that clearly are not working and put the patient and health care provider back at the center of the health care system. The focus of this effort is to expand health care choices, increase access to care, and reduce costs. I believe we can achieve these types of reforms without growing government.
<nbsp;>
We should keep some parts of the law, like not denying insurance coverage to those with pre-existing conditions, allowing young people to stay on a parent’s plan, and eliminating lifetime caps for insurance coverage.

So, we’ll keep watching to see which way Rep. Wittman goes as the bill moves along. We know Rob to be among the most hard working, honest, and conscientious legislators in Congress, so we know he won’t come to an ultimate decision lightly, or for the wrong reasons.

UPDATE: Rob released an email statement this afternoon further elaborating on his decision not to support the AHCA. It sounds a lot more like an unequivocal “NO.” Here is the key graf:

But the new health care bill introduced by House Republican leadership (the American Healthcare Act, or AHCA) does not do what is necessary to truly repeal Obamacare’s onerous provisions, open up health insurance to the free market, or return health care decisions to patients and their doctors.

Second District Rep. Scott Taylor is in his first term, and won office last year on a straightforward promise of repeal and replace: “[Health care is] an incredibly complicated subject.  Health care affects literally every American.  Here is what is not complicated – Obamacare should be repealed and replaced.”

We have been unable to find any commentary from Rep. Taylor on the AHCA. So far it looks like he hasn’t taken a public stand one way or the other.

Our other freshman, the Fifth District’s Rep. Tom Garrett, didn’t take long to make up his mind against the bill, at least in its current form:

Garrett and other conservatives spoke out late Tuesday afternoon in Washington. They want to see changes to the 123 page proposal which would replace the Affordable Care Act.
<nbsp;>
The legislation keeps some provisions including coverage for those with pre-existing conditions, but it makes a lot of changes. Garrett said the plan is too important to rush through and was clouded in a cloak of secrecy. The congressman is calling for a debate over what he’s[sic] calls a new entitlement.
<nbsp;>
“I’ve heard people characterize this as a lot of people playing a lot of games of chicken. We’re resolute and we’ll stand here and we’ll do what’s right not just for today but for posterity,” said Garrett.

So, likewise, Garrett doesn’t support the legislation as it stands today. We’ll have to wait and see if changes to the bill go far enough for Rep. Garrett.

Like other incumbent Republicans, the Sixth District’s Rep. Bob Goodlatte campaigned on repealing Obamacare, saying, “I am committed to working with Members on both sides of the aisle to repeal the President’s health care law and take the steps needed to reform our health care system the right way.”

More recently, he has released a statement that is generally pretty enthusiastic in its support of the AHCA:

The American Health Care Act takes bold steps to repeal the unworkable employer and individual mandates forced on Americans and rolls back Medicaid expansion while providing access to affordable health care. It expands the use of Health Savings Accounts by increasing the maximum contribution levels by nearly 100 percent and repeals a number of taxes that were imposed by Obamacare, including on medical devices. The American Health Care Act also preserves vital patient protections like coverage for those with preexisting conditions and allowing young adults to stay on their parents’ plan until age 26.

While this certainly sounds like the rhetoric of a true believer, Goodlatte leaves himself with some wiggle room, concluding with this caveat: “I continue to review the American Health Care Act to make sure it’s a better way forward for Virginians than our current course,” reserving the right to reverse course.

Rep. Dave Brat in the Seventh District won his seat, in part, by campaigning to repeal Obamacare. Promise kept. In fact, Brat today became among the first to vote against the bill when he opposed it in the House Budget committee, where it barely passed.

Although Ninth District Rep. Morgan Griffith‘s campaign website contains this statement, “Morgan remains firmly opposed to Obamacare and has repeatedly voted to repeal this disastrous program,” he is nonetheless all-in for the Speaker’s proposal. And, not only is he for the AHCA, but contra Garrett, he believes the process surrounding it is a model of transparency:

The American Health Care Act repeals Obamacare [Ed: Um…I do not think those words mean what you think they mean] and begins the process of replacement. . . The replacement plan is designed to lower costs and give patients and families more choice and flexibility in their health care. Furthermore, it allows the states to have more power and gives less power to the bureaucracy in Washington, D.C.
<nbsp;>
As we promised when campaigning, the American Health Care Act does provide protection for those with pre-existing conditions and the ability to stay on your parent’s insurance until you are 26.
…
Republicans are delivering on the promise to repeal and replace Obamacare, with transparency at each step of the way.

Finally, Rep. Barbara Comstock of the Tenth District won her nomination and election in 2014 as a staunch opponent of Obamacare:

We need to repeal and replace Obamacare. We need to have good, patient-centered reforms, and we can have them and they don’t need to result in huge premium increases.”

Comstock also participated in the symbolic vote to repeal Obamacare in 2015. As with some of her other colleagues, these days that anti-socialist ardor appears to have cooled.

However, Comstock, to her credit, has said that the AHCA is a “work in progress,” suggesting she’s not in favor of the bill in its current form and wants to see it changed. From the Loudoun Times:

While dozens of lawmakers have been outspoken in support or opposition of the proposal, which was unveiled last week, Comstock has remained silent.
<nbsp;>
Jeff Marschner, Comstock’s deputy chief of staff, said, “The legislation is a work in progress, and we continue to talk with constituents, medical professionals and other stakeholders on their concerns and needed reforms.”

So, for the time being it appears that Wittman, Garrett, and Comstock don’t like the current version of the bill, and at least Wittman and Garrett would vote against it without significant changes. Goodlatte and Griffith appear to generally be pleased with it, with Goodlatte explicitly reserving the ability to reverse course. Taylor is an unknown.

Only Dave Brat has taken an unequivocal position against anything short of full repeal, then replacement, of Obamacare. [UPDATE: Rob Wittman later in the afternoon on the day this was first published released a statement much more strongly resembling an unequivocal “NO” akin to Dave Brat’s. See above.]

My take? The AHCA has some good ideas, and does embody certain conservative improvements, like allowing states more latitude in spending their Medicaid budgets, and incentivizing health savings accounts, and so forth. But it doesn’t fix the ultimate problems with the law, and leaves the trainwreck-inducing portions essentially untouched.

I believe the best course of action is for Republicans to do what they promised: completely repeal the ACA. Then, Republicans should sit down with Democrats and the public to come up with a better solution. This provides an opportunity to have the kind of open, transparent, and bipartisan legislative process we were deprived of in 2009 and 2010 when the ACA was shoved down our throats.

Otherwise, politically speaking, Republicans are setting themselves up to be ravaged from two sides. First, they’ll catch absolute hell from their base. We’ve been promised for years that Obamacare would be repealed. The House has voted several times, including the aforementioned late 2015 vote for clean repeal, and virtually all GOP members have campaigned on repeal. Not actually repealing it will backfire in ways that could potentially be very damaging to the Republican Party at large, and to their own re-elections in particular.

Second, the Pottery Barn rule applies: you break it, you buy it. If, with significant Democrat opposition, Republicans participate in merely tweaking Obamacare and introducing good tangential reforms without the needed structural fixes, then in the eyes of the public the GOP owns it when it inevitably crashes and burns.

So if we can’t repeal it and start over, and if we can’t really fix it, the best course of action is to do nothing, and let it die on its own. It won’t take much longer.