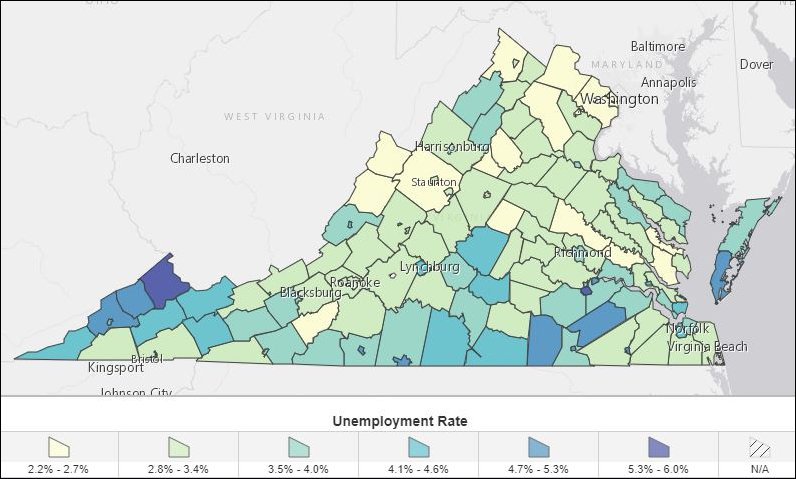 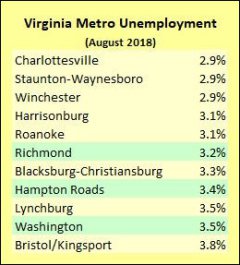 There is still an urban-rural divide. Unemployment remains high in non-metropolitan localities, especially in Southside and the far Southwest. But it’s encouraging to see that the smaller metros appear to be thriving. For many years since the 2008 recession, the smaller metros had lagged the larger metros in critical indicators of prosperity. Now, according to the August 2018 labor-market data, Virginia’s smaller metros are experiencing labor shortages.

The following chart compares the number of unemployed in Virginia’s metro areas with the number of advertised job openings. The labor shortage is the most acute in Northern Virginia where there is only one unemployed worker for every four open positions. (Technical note: My data source is the Bureau of Labor Statistics. There may be issues comparing data sets for the Virginia portions of the Washington and Winchester MSAs.) But even in Danville, long the poster child of a depressed Virginia mill town, there are more job openings than unemployed workers. 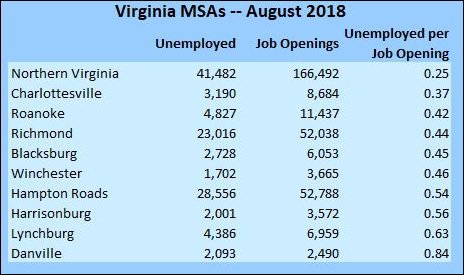 One critical issue now is the job-skill mismatch. In an ideal world, unemployed workers would fill the open jobs. In all likelihood, only a few possess the skills that would allow them to do so. But that’s a good problem to have. Virginia has plenty of community colleges and career schools that help with the transition.

Another issue is labor force participation. While unemployment may be low in Virginia’s smaller metros, a larger percentage of the potential workforce may be sitting on the sidelines and not actively seeking work than in the big metros. But the booming economy seems to be changing the attitude of millions of Americans, and we may well see more discouraged workers entering the workforce.

When Virginians get jobs, they not only earn wages and pay state, federal and payroll taxes, in some instances they drop off disability rolls, stop drawing food stamps, and get medical insurance — thus reducing payouts for the social safety net. It won’t last forever, but it is a good news story. Let’s relish it while it lasts.